BRUSSLES – The European energy industry, NGOs, academics and other experts agree that the EU Emission Trading System (ETS) is in need of fixing and the European Commission is aiming at a decision on EU climate and energy targets for 2030 within the next two years.

Published on February 7, 2012 by Eivind Hoff 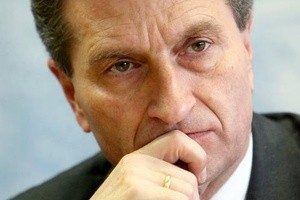 Those were amongst the key conclusions from a stakeholder conference organised by the Commission on its recent Energy Roadmap 2050.

Frederic Hauge, President of Bellona, is a member  of Energy Commissioner Günther Oettinger’s  Advisory Group established to assist  the Commission’s work on the Road map.

“I am pleased to see the reactions and debate the road map has spurred. This is a good start of a long road towards finding the right tools for decarbonising Europe, and I look forward to follow and assess the input from the other EU institutions in the coming months,” said Hauge.

“The EU has an important role to play in leading the fight against global warming. The work to decarbonise at home will also be important to give the EU credibility in the UN negotiations on a global agreement towards 2015,” he said

Commissioner Oettinger introduced the Energy Roadmap’s headline message that  “decarbonisation of energy is technically feasible. Decarbonisation will not make energy more expensive, it could even lead to development of exports.”

The Energy Roadmap 2050 indeed finds that decarbonisation will drive expenditure into investments in the EU economy instead of imports from non-EU countries. Climate Commissioner Connie Hedegaard illustrated this point:

She also stressed that fossil fuel production was a very expensive activity even when the fuels are of EU origin.

“Each coal miner in Spain is subsidised by €73,000 per year. In Germany, the figure is €54,000 per year,” she said. “That is not a good prospect for Europe. (…) Business as usual does not come for free. If people start to realise that, they will also understand why it makes sense to invest in a more climate friendly world,” she added and reminded the audience of a key conclusion from a Commission impact assessment on climate policy:

“If emission allowances under the ETS are auctioned and CO2 taxation introduced, in order to reduce labour costs, employment will increase.”

Professor Dieter Helm gave a formal reaction to the Energy Roadmap 2050 and introduced the report of the advisory group he had chaired, of which Bellona president Frederic Hauge had been a member.

“Last year China’s emissions went up 9 percent. It is global warming we care about. That situation is bleak,” he said.

Helm further explained that while EU carbon production has gone down since 1990, the EU carbon consumption – in other words the greenhouse gases emitted to produce the goods and services consumed in the EU – has gone up.

“As we note in our advisory report, carbon consumption needs to be taken into account,” Helm said. He further warned against the assumption of ever higher fossil fuel prices.  “My concern is that we have too much oil and gas. We are not going to be rescued by high prices. This has large implications for how we address climate change.”

“In this context,” Helm said, “the roadmap makes important contributions. It’s not captured by lobbyists. It does not provide one single scenario.”

He stressed however that it might be a politically attractive delusion that there will not be a significant cost of a transition to a decarbonised energy system:

“It is unlikely that this can be achieved without substantial impact on people’s standards of living. It is implausible when all the scenarios in the roadmap come up with roughly the same numbers for costs.”

The fundamental question, however, was “where’s the investment coming from and how can we keep the cost of capital down?”

Johannes Teyssen, CEO of German utility E.ON made a powerful plea for fixing what was wrong in the present:

“No one invests today on the basis of the EU emission allowance price [about eight euros per tonne of CO2]. We need to fix the Emission Trading System first, and stop the Sunday speeches we are having here,” he said.

Teyssen did not specify how to fix the ETS: Jason Anderson of WWF defended the proposal currently debated by the EU institutions to withdraw a number of emission allowances from the EU ETS as well as introducing a sharper annual automatic decrease in the number of allowances available for emitters.

Chris Davies, Member of the European Parliament, was not so confident in the ability of the market to deliver.

“In EU environmental policy, letting things to the market or to Member States has not been as significant as other measures. Three and a half years ago the motor industry was lobbying to prevent a binding target for reducing average emissions from 155gCO2/km to 120gCO2/km,” said Davies.

“Since those targets were adopted, the car industry has leapt forward. There are scores of cars on the market now that are well below the targets that have to be reached in 3-4 years,” he said.

Davies defended the use of more regulatory instruments.

“CCS can only be driven by regulatory instruments or throwing money at the problem,” he said. “My only answer is to raise our ambitions, be courageous. If we don’t do that we will indeed be left behind.”

Teyssen concurred with this approach.

“I believe in renewables. But clear targets need to be set for renewables, like for cars. If you tell solar or wind that they need to reduce costs otherwise they will be dead, I guarantee they will cut costs,” he said.

There was a broad consensus that the ETS needed fixing in order to provide a higher and more predictable price for CO2 emissions – quickly.

“During the term of this Commission – so within the next two years – we want to reach a decision on 2030 targets,” he said.

“We want to discuss with Member States, industry and NGOs so that we can come forward with proposals laying down the general principles of our energy policy beyond 2020. 2030 is perhaps more important than 2050, but both horizons are very important for us.”