Published on November 4, 2011 by Anna Kireeva, translated by Maria Kaminskaya 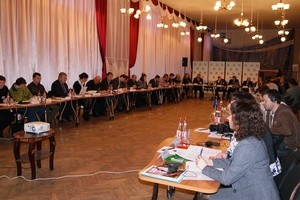 “We are happy to see that Kola MMC is ready for a constructive dialogue. We had an interesting seminar, and the heated debates during discussions served to underscore once again the importance of the topic at hand,” Bellona-Murmansk’s chairman of the board Andrei Zolotkov said after the seminar.

Last week, Bellona and Kola MMC sat down together in the Russian town of Zapolyarny, on the Kola Peninsula, to discuss the serious environmental problems surrounding the Russian smelting giant Norilsk Nickel’s metal works on the peninsula and the effect the company’s environmental pollution has across the border in Norway. Bellona and Kola MMC were joined at the seminar by municipal authorities from Pechenga Region of the Kola Peninsula and those of the northern Norwegian county of Finnmark, as well as scientists and researchers.

At the seminar, Bellona’s representatives made sure to emphasise that the environmentalists’ goal was not to demand that Kola MMC close down its operations – but that it ensure a significant reduction in harmful emissions produced by its enterprises.

“Norilsk Nickel’s products are needed all over the world. The metals they produce are needed, among other things, for the development of clean energy technologies and renewable energy sources,” said Bellona President Frederic Hauge. “But the company must reduce its sulphur dioxide emissions dramatically. Today’s emission levels are unacceptable.”

“We can only ensure further emission reductions on a significant scale if we approach this in a drastic way, changing the technology and building new capacities,” Tolstykh said.

To that end, Kola MMC is rebuilding one of its production shops in Zapolyarny. This is a RUR 2.2 billion ($71.5 million) project Norilsk Nickel started in 2009.

According to company information, the project will replace the existing pelletising-roasting circuit, which has been generating considerable amounts of non-treatable gaseous sulphur dioxide emissions, with concentrate briquetting process, where no roasting is required.

The existing process, a Norilsk Nickel press release of 2009 said, involves filtration and roasting of copper-nickel concentrate into pellets going for smelting. During roasting, a part of contained sulphur is burnt out and discharged into the atmosphere because no sulphur capture technology was provided for in the pelletising and roasting shop’s original design.

The modernisation project is now in its final stages: Pre-launch works are under way at the first agglomeration line at the shop, and already a quarter of all output is being produced with the help of the new technology.

This is expected to increase to three quarters of all output in the beginning of 2012, though the upgraded briquetting shop will not be fully online before next summer.

Cecilie Hansen, mayor of the Sør-Varanger municipality in Norway’s northern Finnmark county – Sør-Varanger, whose administrative centre is the town of Kirkenes, shares a border with Russia – said her municipality was aware of the project, but Norilsk Nickel’s other production sites in the north still remained a cause for concern.

“We’ve long known about this project. But we are worried about the fact that the Zapolyarny site is not going to solve the whole problem. Part of the sulphur that was burnt earlier during roasting will now be discharged into the atmosphere with ore smelting in the neighbouring Nikel,” Hansen said, referring to the settlement of Nikel, where Norilsk Nickel operates a number of production sites, including a smelting enterprise.

If a decision about what kind of technology Nikel will operate on in the future is made at the end of this year, then production based on an upgraded technology will only start in five years at best. This dampens the hope that sulphur dioxide emissions will see a dramatic cut within at least this period.

One of the most heated debates at the seminar was over Norilsk Nickel’s press release last July that the town of Monchegorsk, where the metallurgical concern operates one of its enterprises, Severonickel, has this year been updated from the status of a “red” zone to that of a “yellow” zone. Murmansk Region, which includes the town of Monchegorsk, is on an environmental hot spot list as per a 2003 report that the Nordic Environment Finance Corporation (NEFCO) produced in collaboration with the Arctic Monitoring and Assessment Programme (AMAP).

As explained on the Barents Environmental Hot Spots website of the Barents Euro-Arctic Council (BEAC) – a forum for intergovernmental cooperation that brings together Norway, Finland, Russia, and Sweden on issues concerning the Barents Region – “hot spots are ecological sites that have been polluted and pose a health risk to those who live near them, either because of the direct impact or potential to poison the drinking water or other food chain.”

In February 2010, a procedure for exclusion of the 42 environmental hot spots from the Barents Environmental Hot Spot List was adopted by the ministers of environment of the four Barents countries, with the goal of launching projects in 2013 that would lead to the elimination of the hot spots, the hot spots website says.

The “red” status would testify to a severe impact of industrial activities on the surrounding environment, while the “yellow” status says that the adverse effects are not substantial. The July statement by Norilsk Nickel said that following a visit of an international delegation of ecologists to Murmansk Region and an on-the-spot assessment of Norilsk Nickel’s environmental practices, the “possibility of exclusion of Monchegorsk from the list of trouble spots was discussed by the parties” and the discussion ended in “a resolution to change the status of [Monchegorsk] from “red” to “yellow.”

However, this information is now disputed as lacking substantiation. In a letter of November 1, addressed to Norilsk Nickel and the administration of Murmansk Region, the BEAC’s Working Group on Environment’s Subgroup on Hotspot Exclusion strongly refuted Norilsk Nickel’s claim.

The Russian-language letter, of which Bellona has a copy at its disposal, reads, in part:

“The statement that a decision was supposedly made by the [Subgroup on Hotspot Exclusion] to change the hot spot status for Severonickel from ‘red’ to ‘yellow’ is not consistent with reality and has caused a wide-spread negative reaction both outside the Russian Federation and among Russian environmental organisations.”

It continues to say that “the information posted on [Norilsk Nickel’s] website is profoundly untrue and leads to misinterpretation of the actual situation and Severonickel’s status on the BEAC’s hot spot list”.

The letter, signed by Subgroup on Hotspot Exclusion co-chairs Åke Mikaelsson from Sweden and Russia’s Andrei Peshkov, expresses concern that the “distorted and inaccurate” information has appeared widely in the press and points out that Severonickel’s status has not been changed and no plan to consider a status change is currently on the agenda for 2011 or 2012.

Ecologists and industry’s cooperation is a realistic goal

Despite some of the charged discussion moments, environmentalists and Kola MMC representatives were able to hear and understand each other.

“We saw that the company is seriously invested in solving environmental problems, and we intend to give it all-around assistance. Bellona has more than 20 years of experience establishing cooperation with Russian and foreign companies, and even whole industries, in order to solve environmental problems,” said Bellona’s Hauge.

According to Hauge, the European Commission is adopting increasingly rigorous requirements with respect to the ecological footprint of goods and services exported into European nations. The so-called “ecological tax” levied on the products Europe imports from other countries is growing higher practically every year.

This forces many world companies to modernise their production technologies and reduce the harmful impact their operations have on the environment – and Norilsk Nickel is no exception, Hauge said.

Many of Russia’s environmental woes are all the more difficult to tackle because companies find it cheaper to pay a pollution fine rather than upgrade their operations. But Norilsk Nickel supplies its metals to customers all over the world, not just Russia. So it has no other course to take but adopt the most state-of-the-art production technologies and reduce its enterprises’ environmental impact as soon as possible, Hauge said. For its part, Bellona is ready to help the company in every way it can.

Non-Russian-language quotes appearing in this story, apart from the quoted letter, have been translated into English as provided in the original report in their Russian translation.