GARDEMOEN – Former Swedish Prime Minister of Göran Persson spoke with restrained pessimism at the Zero-conference climate change gathering outside Oslo yesterday when he said, “we have a dream, not a nightmare.”

Published on September 29, 2009 by Annicken Vargel, translated by Charles Digges

Some 550 participants gathered Monday and Tuesday for the Zero-conference in Gardemoen, a suburb of Oslo, to hear talks on climate change. Persson was quick to remind Norway of its special responsibility in endeavours to battle climate change.

Norway is a beautiful country,” said Persson.  “It is the wealthiest and healthiest country in the world. There is probably no one who would not switch placed with you,” he told the audience, adding, "But do not forget that this wealth has been built on oil and gas resources – and with that comes enormous responsibility.”

With reference to further developments for the climate, Persson said, “(Martin Luther) King (Jr.) did not say ‘I have a nightmare,’ – he said ‘I have a dream. And I am a restrained pessimist in the lead up to Copenhangen” where the international community is hoped in December to reach deep international emissions cuts agreements to replace the Kyoto Protocol.

Lord Nicholas Stern will be concrete
Among the other speakers at the Zero-conference were Lord Nicholas Stern, author of the vaunted UK report on climate change’s impact on world; Jonathan Lash of the Washington-based World Resource Institute environmental think tank; CEO of Norway’s Petroleum Geo Services, Jens Ulltveit-Moe; Norwegian Minister of Petroleum and Energy Åslaug Haga, and Jorgen Randers, professor of climate studies at the Norwegian School of Management.

Lord Stern stressed the importance of being specific when speaking of   climate change. He said that he will steer clear of speaking in percentages, which are easier to discuss and wriggle out of – and will instead speak in terms of tons. 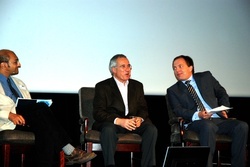 “The problem with using percentages as a goal for climate gas cuts is that it creates uncertainty about the time aspect – percent cuts in relation to what, and not the least, by when,” Stern said. –

Cuts by the ton
Instead, Stern said it was necessary to quantify cuts in giga-tons.

“We must be specific, down to details, when we talk about what will happen. If we were talking about a temperature rise of five degrees, it would mean Southern Europe is a desert. The area from Bangladesh to Florida will be under water, rivers will change course and direction,” said Stern, direly.