The United Nations special envoy for Climate Change and president of the Club of Madrid, Ricardo Lagos, says the Climate Conference 08 (CC8) in June could not be more timely and said he looks forward to coming to Norway to discuss the climate change problem. 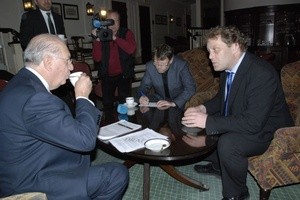 Ricardo Lagos, president of Chile from 2000 to 2006, was in Oslo this weekend and met with both Bellona’s president Frederic Hauge, and CEO of Hafslund, Christian Berg. In one month the three will open the international Climate Conference 08 (CC8) in Norway.

“This conference could not have come at a better time,” said Lagos.

The international climate negotiations are set to end in a new global climate agreement in Copenhagen 2009. The main goal of CC8 is to provide input for these negotiations.

One of the key issues to be discussed at the conference is how rich countries may contribute to the development of new technologies for – among other things – carbon capture and storage and renewable energy, and how poorer countries may utilize these technologies.

“Based on the experiences we have gained from Kyoto, we know it is difficult to include these nations. That is why this conference is so important, giving an opportunity to discuss technology and financing.”

Lagos and Brundtland are both UN special envoys for climate change, and are attending CC8 this summer. The third envoy is former South Korean Secretary of State Han Seung-soo.

A key task for the special envoys is to inform the international climate negotiations about feasible solutions to the climate issue.

United forces
The Club of Madrid has joined forces with Bellona and Norwegian energy company Hafslund to organize the CC8 conference at Hafslund Manor in Sarpsborg, south of Oslo, on June 5th and 6th this summer.

Lagos looks forward to coming to Norway and says he is happy to be cooperating with Bellona.

“Instead of just complaining, Bellona has ideas and finds technological solutions to the environmental problems,” said Lagos.