A political solution to save the climate 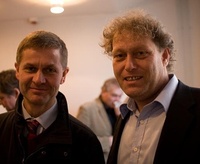 Bellona President Frederic Hauge said he could not be in more agreement.

"We cannot afford to leave Bali without such a breakthrough," Ban said, adding that the threat of climate change was the "defining challenge of our age," he said in remarks reported by Agency France Presse.

The report by the Nobel Peace Prize winning IPCC "contains one overarching message for all of us: that there are real and affordable ways to deal with climate change," he said.

Politics are the solution
At a Saturday press conference in Oslo following the issue of the final IPCC report in Valencia, Solheim was confronted in Oslo by a question that also confronts environmental organisations and activists: What can the person on the street do to put the breaks on global warming?

Solheim said he didn’t want to cast the current climate challenge as a moral problem for the individual. He emphasises that it was first and foremost the heavy responsibility of politicians to find solution to the climate problem.

“We politicians must put into motion efforts for example a more rapid switch to hybrid vehicles or better collective transport methods, said Solheim.

“Running around the provinces of Norway and asking people to drive less without offering an alternative, that is something I would not consider.”

Pressuring the politicians
Solheim’s message was that the most important thing an average Norwegian – or any citizen – can do to take part in the climate battle is to put pressure on their politicians to make the climate job their mandate.

“It’s of course fine that the people can put pressure for example on automobile producers or the aviation industry to me more environmentally friendly, but climate challenges are not an individual moral problem like shopping at the duty free shop at Gardemoen,” Solheim said, referring to Oslo’s international airport.

“We need social changes,” he said.

He compared the climate to education: “Should education in Norway depend on all teachers and student just pulling themselves together to do a better job?” He continued: “We certainly don’t think that way about education. Education is a question of what kind of schools we want to have – teacher training is the same thing – it’s about educational politics?”

Taking responsibility
Bellona’s Hauge has a high assessment of what he said was a clear approach showing backbone in leadership in the Environmental Protection Department.

“Solheim is signaling that here is where the big industrial solutions must come, which is what Bellona has stood for the entire time. Now we have a common foundation,” said Hauge, adding: “We will not underestimate the importance of the input of each individual, but the most important thing that can happen is that the political system will be disposed toward good solutions.

Hauge had in mind that those who earlier abdicated political responsibility had earlier emphasised the individual’s responsibility in the climate battle.

“But now Solheim is taking political responsibility. He must see that politicians can substitute market mechanisms and provision with industrial solutions.”

“This is very much in line with the research. Of course its like everything will go well if everyone does exactly what they should, but that won’t happen,” He said, “We already have much of the technology we need and this can solve the problems, but this is a political challenge,” he said.

It is the biggest industrial sources that emit the most CO2 in the world. Among the 8,000 most important large emissions come from coal fired plants and refineries, and these 8,000 emissions sources account for 60 percent of the world’s total CO2 emissions.

Hauge of Bellona is also sick of the debate about costs. He feels that we can no longer debate the costs of climate action, but must implement measures regardless of their price.

"We have to find out what will technically do the job and free this from the costs. Since the consequences are so grave we must be willing to pay a high price," he says, and underlines the importance of carbon capture and storage (CCS).

"CCS is the weapon we did not have when we created the Kyoto protocol. During the negotiations at Bali we must use this weapon for all its worth," he says to Bellona Web.