More emphasis should be placed on the consumer in climate change policies argue scientists at the Norwegian University of Science and Technology, concludes a recent study which shows that significant portions of Norwegian carbon dioxide emissions are embodied in imported goods from countries with no obligations to international agreements on climate change. 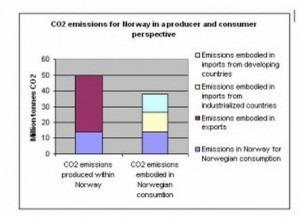 The study has global impact following the recent the ratification of the Kyoto protocol because signatory countries could unwittingly be adding to the very greenhouse gas emissions they are trying to reduce by importing goods that contain carbon dioxide producing elements manufactured in countries that are not bound by the treaty.


Dr. Glen Peters and colleagues at the Industrial Ecology Programme of the Norwegian University of Science and Technology (www.www.indecol.ntnu.no)

have in a recent study shown that carbon dioxide emissions embodied in imports represent a large fraction of the emissions associated with consumption in Norway.


The full scientific paper can be downloaded in pdf format at www.indecol.ntnu.no/indecolwebnew/publications/papers/workingpaper04/workingpaper6_04web.pdf

In their paper Pollution Embodied in Norwegian Consumption, Peters and his colleagues apply a technique called multi-regional input-output analysis together with international trade statistics and emissions data for Norways most important trading partners. Through this technique, Peters is able to calculate in his study the carbon dioxide emissions associated with consumption of goods in Norway, as well as tracing which countries emit the pollution.

Although only 16 percent of the household consumption in Norway is accounted for by imported goods, approximately 63 percent of the total carbon dioxide emissions are embodied in imports. One of the most important reasons for this is the unique energy supply in Norway, which consists almost entirely of hydropower that facilitates clean production of products in comparison to most other countries. It therefore follows that imports contribute more to carbon dioxide-emissions relative to Norwegian production.


If Norwegian consumers were responsible for the carbon dioxide-emissions, then market mechanisms may provide incentives to shift production to countries with cleaner technologies, or to develop cleaner technologies in developing countries. This point is particularly evident in the clothing sector, where 97 percent of Norwegian consumption is imported. Of this about 52 percent comes from developing countries and represents 94 percent of the emissions associated with the consumption of clothing. 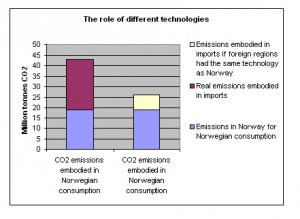 Another conclusion of Peters work is that overall the carbon dioxide emissions from Norwegian consumption are smaller than the emissions occurring domestically. This is because of Norways large export of carbon dioxide intensive products and also because Norwegian technology is cleaner in comparison to the countries Norway imports from, as illustrated in the diagram above. If the consumer was made responsible for carbon dioxide emissions, then Norway would have a competitive advantage in the world market due to its clean technology.


Christian Solli, a research assistant at Norwegian University of Science and Technologys Programme for Industrial Ecology, contributed to this report.