One year after Boundary Dam opened – CCS in action!

One year ago we saw the first commercial carbon capture and storage (CCS) project came into operation at SaskPower’s coal plant in Saskatchewan, Canada. One year later, its results have been better than expected, illustrating the commercial readiness of CCS technologies. Apart from good news for further investments in CCS projects, this makes a real difference to our climate mitigating actions.

Published on October 13, 2015 by Bellona Europa 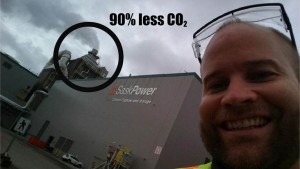 The Boundary Dam Carbon Capture and Storage Project came into operation during the fall of 2014. Bellona Europa Director Jonas Helseth was present for the opening event, and on the one year anniversary notes that ”Those who say CCS is unproven on industrial scale: it was proven years ago for several industries and now Boundary Dam has proven it in the power sector”.

Helseth further added: “What is more, Boundary Dam’s engineers claim they can now reduce costs by at least 30 % for another CCS project. Climate science has been crystal clear that we desperately need CCS deployment, and now there are no more excuses for inaction.”

The project retrofitted Unit 3 of the power plant with post combustion capture technology. The captured CO2 is sold and transported through pipelines to an enhanced oil recovery facility. The project has managed to capture 90 per cent of the CO2 originally emitted, proving that CCS is a highly efficient tool to limit global CO2 emissions. Furthermore, the plant has managed to produce more power than expected.

The Boundary Dam CCS project has during its short time of operation won several prizes, including the Edison Electrical Institute’s Edison Award, which is one of the most prestigious honours in power generation. It has also garnered the attention of National Geographic, who has listed the project as one of ten energy breakthroughs that could make a real impact on the world.

There are currently several CCS project on the way globally, however Boundary Dam was the first full-scale project that actually took the final step towards commercialisation.

The possibility to clean up coal power plants is essential in a climate action perspective. China, India and Southeast Asia are regions that heavily rely on coal as an energy source and still will in the near future. Therefore it is great news to see a successful CCS project up and running. Further large scale CCS application will be needed to make the transition to a low carbon economy.