The trend of re-invigorated Carbon Capture and Storage (CCS) engagement experienced in the last few months was continued today at the annual SCCS Conference held in Edinburgh, UK. Bellona’s CCS team spent a fruitful day partaking in this year’s discussions, focused on capitalising on our huge North Sea potential. Bellona Europa Director Jonas Helseth was amongst the speakers during the day’s first session of presentations and spoke of the carbon negative potential of combining CCS with sustainable biomass (Bio-CCS). Following on from which, breakout sessions were held, the input from which will be collected and presented in report form.

Published on October 30, 2014 by Bellona Europa 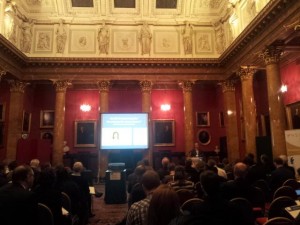 The timing for the conference was ideal: A mere week after Europe’s leaders confirm their commitment to CCS with an explicit reference to the technology in the European Union’s 2030 framework on climate and energy (read more here). With the opening of the world’s first full scale commercial CCS facility at Boundary Dam in Canada last month (read more here), the mood at the SCCS Conference was one of optimism and renewed motivation to see European projects delivered.

As Chris Littlecot of the NGO E3G noted: “We now have an open door to CCS”. These were the words with which he encouraged attendees to take the opportunity to think afresh at the breakout session focused on ‘Incentivising CCS to 2030+’. Other breakout sessions addressed ‘R&D catalysts’ and ‘Destination North Sea’.

What the EU can learn from the US

The event was widely attended by leading CCS figures from both sides of the Atlantic. Member of the European Parliament Jude Kirton-Darling spoke of the social arguments for CCS when applied to industry. If Europe is to meet its reindustrialization and growth goals, CCS is going to be a part of the picture. She also mentioned the potential of a European ‘energy union’ (the understandings of which are still varied) to represent the potential of a new ‘internal market’. Kirton-Darling was followed by fellow EU-actor Ilinca Balan from the European Commission. Balan has been driving CCS matters in the Directorate-General for Energy and reported on ongoing policy work. She has also been following the financial developments surrounding the Rotterdam CCS project ROAD, which has recently been given a further extended deadline.

Joining from the United States and the Clean Air Task Force was Kurt Waltzer, who discussed the US experience with regulatory change and impetus for CCS. With the US’s first full scale commercial CCS facility opening next year at Kemper County, Mississippi, the comparisons offered valuable lessons for Europe. Most poignant was perhaps the CO2 market which exists in the US and which to a significant extent has driven technological development. The use of CO2 for Enhanced Hydrocarbon Recovery (or EOR) as a stepping stone to developing a solid business case for CCS was underlined and Waltzer encouraged Europe not to miss the window of opportunity that now exists to drive CCS with EOR in the North Sea.

The move to implement an Emission Performance Standard (EPS) in the US, which will effectively outlaw certain coal power plants without CCS, was also of interest at the conference. Bellona Europe has submitted a joint call on Europe to follow suit (read more here). But Waltzer also drew attention to other implications of this move, namely that CCS technology will now be legally recognised as feasible technology in the US. This could mean that a building permit for a new power station could be challenged on grounds of not including CCS. These sentiments were echoed by Scottish Minister for Energy, Fergus Ewing, who noted that similar expectations to use best available technology need to also be placed on hydrocarbon producers.