The leaders of the European Union met with President Barack Obama on 26 March on the occasion of the EU-US Summit in Brussels. Climate change and energy were among the points on the agenda. The parties recognised that climate change is a risk to global security, as well as a prerequisite for sustainable economic growth. 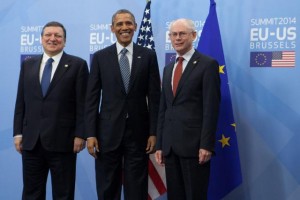 The US President came to Brussels following an invitation by European Council President Herman Van Rompuy and European Commission President José Manuel Barroso. It was Obama’s first visit to the EU institutions.

The Joint Statement of the summit states that the parties reaffirm their “strong determination to work towards the adoption in Paris in 2015 of a protocol, another legal instrument or an agreed outcome with legal force under the Convention applicable to all Parties, to strengthen the multilateral, rules-based regime” and that the “2015 agreement must be consistent with science and with the goal of limiting the global temperature increase to below 2°C”.

Energy is a key component in the transition to a competitive low-carbon economy and achieving long-term sustainable economic development, according to the statement. What is more, the parties agreed to “strengthen knowledge-sharing on carbon capture and storage”.

Bellona welcomes the attention to CCS in relations between the EU and the US and also recalls that the European Parliament’s report on the 2030 framework called for a similar exchange of best practice on CCS.