Published on January 21, 2014 by Bellona Europa 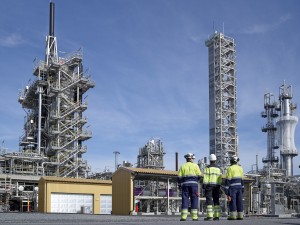 Bellona President Frederic Hauge was one of the first to testify under the first day of hearings on what former Prime Minister Jens Stoltenberg dubbed Norway’s ‘moon landing’ – The CO2 capture and storage (CCS) project at Mongstad. – We’ll shed some light on the dark side of the moon. For this is a dark history of political incompetence, says Hauge.

Hauge is crystal clear that it was insufficient political control that created such problems for the project.

– The technology for the capture and purification of CO2 already exists, so it was political incompetence that led to the crash landing, says Hauge.

Former Prime Minister Jens Stoltenberg was the first to come to the hearing. He held a five-minute introduction, before the parliamentary committee posed their questions.

Stoltenberg stressed that in the autumn of 2013, in connection with the 2014 state budget, it was concluded that it was best to shelve the project of full-scale capture at Mongstad.

– From 2014 the cost would become more specific to the Mongstad full-scale plant, and therefore less useful for technology development and transfer value to projects elsewhere.

He also claimed that the estimates of the costs of a full-scale plant rose when more knowledge was presented.

– Now the calculations say that the costs are up to 25 billion kroner, Stoltenberg said.

Bellona is highly critical of the use of this figure of 25 billion, and fears that it has been used to undermine confidence in the project. Frederic Hauge took hold of precisely this point when he held an introduction and answered the committee’s questions.

Before the hearing Hauge said: – I will spend time revealing just how little control the government has had with the exaggerated cost estimates. The dubious claim that a full-scale plant should cost 20-25 billion has stood unchallenged without anyone critically considering its foundation. It has simply been repeated and repeated as an adopted truth, without anyone questioned Statoil’s interests in making the project more expensive than necessary.

– Based on a plethora of reports that we have worked with in EU technology platforms, I believe that the plant could be built in 4-5 years for around 12 billion.

Hauge believes the committee should examine how the oil and energy ministry has considered the information from the so-called “master plan” for Mongstad, where the estimate of 20-25 billion originated.

– I would strongly recommend you to examine and see if the Minister had an independent duty to verify a master plan’s cost estimate. This is very debatable figure should not be left unchallenged and without critical review.

In his introduction the Bellona leader flagged a possible violation of the petroleum act from the Petroleum and Energy Ministry or Petroleum Directorate.

– The Petroleum Directorate’s mission is to ensure the best possible use of our shared resources. Unfortunately, there has been far too little focus on the possibility of using CO2 from Mongstad for enhanced oil recovery from offshore fields. Today gas, which could instead be sold, is used for this. CO2 from Mongstad could replace this gas, which could then be sold. It could lead to large values ​​for Norwegian society.

The committee’s representative from the Socialist Left Party (SV) Karin Andersen raised the issue at with current and former executives of Petoro.

– I am of the opinion that it would be very difficult to succeed with a claim that the Petroleum Directorate has not maintained their role.

– No basis for postponement

In March 2011 the government decided to postpone the investment decision related to a full-scale facility by two years to 2016.

It happened with regard to the so-called new information that the amine -based capture technology could lead to increased cancer risk. Frederic Hauge believes that the decision to delay was wrong, and that it was taken on a false basis.

– Government specialist agencies Klif and Folkehelsinstituttet were not consulted. Klif came the next day with a note that said there was no higher risk than previously. It was therefore completely incomprehensible to postpone the investment decision on this basis.

– A major scientific committee of the European Union concluded a few months afterwards that this was a manageable problem. In my view this was a fictional story that should not have been disclosed to the Parliament.

– I am appalled by the game that has taken place in terms of amines, said Hauge, who also pointed out that Bellona already in 2009 wrote a report on amines and possible health hazards.

Could have gone straight to full-scale

During the hearing it was questioned whether it was necessary to build a test center before a full-scale plant at Mongstad. Hauge firmly believes that we could have gone straight to the full-scale development.

– It was not our primary goal to get a test center, we believed and still believe that one could have built a full-scale facility as quickly as possible.

Another important point for Hauge is the organization and responsibilities associated with work at Mongstad.

– We were of the opinion already in 2005 that Petoro, participating in all major developments on the Norwegian continental shelf and therefore having an interest in using CO2 as a resource, should have been responsible for the project. That this advice made ​​sense is only becoming clearer and clearer .

A final issue in Hauge’s introduction was what he believes may be a violation of the law on alerting in Gassnova.

– A brave whistleblower was fired after he or she had taken hold of critique worthy instances, which were contrary to current Norwegian law. This is an expression of poor culture in Gassnova, which may have contributed to poor management and fear within the organization.

In stark disagreement with Statoil

Bellona followed the entire hearing in parliament on Monday. CEO of Statoil, Helge Lund, brought a number of aides when he was grilled by the committee.

Frederic Hauge is shocked at the level of precision in some of the claims Statoil made during the hearing.

– First, Statoil presented the amine report from the EU, which dismisses the issue, in a misleading manner.

– Second, the claim that the coal-fired power plant at Boundary Dam in Canada is to have a smaller capture system than previously thought, has no basis in reality. The fact is that it’s going to be bigger than we imagined just a short time ago, says Hauge.

– Otherwise, it is very interesting that Statoil confirms that the cost estimate of 20-25 billion is very loosely founded. We can then only conclude that it is peculiar that Jens Stoltenberg refers to these figures as if they were based on certain information.