On October 14th and 15th, approximately 40 international experts from research communities and industry came together in Orléans to discuss challenges, opportunities and possible ways forward for the concept of Bio-CCS and its potential for carbon-negative, i.e. negative CO2-emissions. By combining the CO2-binding properties of growing biomass with Carbon Capture and Storage (CCS), the medium- to long-term CO2-abating potential of both technologies is substantially increased. 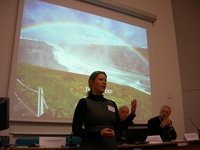 The event was co-organised by the University of Orléans, BGRM and Bellona, and sponsored by the French region Centre. Bellona’s Tone Knudsen gave the opening speech. She showed how the rapidly narrowing window of opportunity for halting climate change can be kept open if progress is made to turn Bellona’s scenario with carbon negative solutions into reality. At the same time, she underlined that an increased supply of sustainable biomass is crucial in this scenario, taking its entire life-cycle into account. Knudsen also briefly presented the Joint Task Force (JTF) Bio-CCS, for which Bellona Europa provides the secretariat. This JTF was met with high interest among the participants.

The ever growing need for sustainable biomass supply was echoed by others, such as Florian Kraxner from the Forest Programme of IIASA. Other participants who presented their work related to Bio-CCS included Biorecro’s Henrik Karlsson, who talked about its potential in Scandinavia. Moreover, Karlsson pointed to a report from McKinsey showing how the CO2 mitigation potential in Sweden could go from 12 million to 40 million tons until 2020 if one adds Bio-CCS to the picture, without the price per mitigated ton rising significantly. He was supplemented by the Finnish institute VTT’s Antti Arasto, presenting their work on a Nordic roadmap for Bio-CCS, showing the potential for capturing about 50 million tons of biogenic CO2 in the Nordic countries alone by 2040.

Joris Koornneef from the Dutch research consultancy Ecofys presented preliminary findings of their study on the potential of bio-energy CCS (BECCS), in this case meaning co-firing biomass with coal in power plants, and CCS connected to the production of biodiesel and –ethanol. Ecofys’ preliminary conclusion was that the potential toward 2050 is high. However, Koornneef joined several of the speakers in pointing at the lack of incentives for Bio-CCS, particularily the need for extra emission unit allowances (EUAs) under the EU ETS when combining biomass with CCS.

The latter issue was also addressed by IEA GHG’s Tim Dixon as well as Bellona’s Eivind Hoff, both giving presentations on incentivising Bio-CCS, who showed that while the ETS does not currently incentivise Bio-CCS, there is an opening for Member States to apply for EUAs for such projects on their territory. Hoff also outlined recent Dutch proposals for incentivising CCS and outlined how they could provide a strong support for Bio-CCS.

In the final wrap-up session, the need for one or several European Bio-CCS flagship projects was highlighted by the participants, It was also agreed that there is a need for clear definitions of terms and better communication on the potential of Bio-CCS; the latter both targeting decision-makers and the general public. Furthermore, issues like biomass carbon footprint, CCS liability and unclear cost estimates must be addressed, and work is needed on additional incentives on national, EU and global level. Tone Knudsen underlined how important it is to involve all stakeholders in this work, including researchers, industry and NGOs, and the JTF Bio-CCS will take these results and questions into account in its further work. Both biomass based industry producing bioenergy or biobased projects as well as fossil based industry have much to gain environmentally from the opportunities Bio-CCS gives.

All presentations given at the workshop will be made available at the event website.