What was agreed in Bali?

190 countries agreed in Bali on an action plan to negotiate a new global climate agreement within two years. 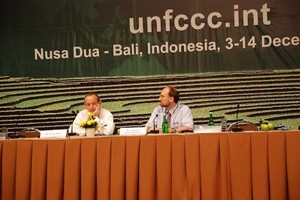 The Bali action plan (also known as the “Bali road-map”) was agreed among the 190 Parties to the UN Framework Convention on Climate Change (UNFCCC). It commits all developed countries to take on quantified greenhouse gas emission reduction targets. Developing countries will commit to "nationally appropriate mitigation actions" – in other words no national emission ceilings for these countries. Nonetheless, all countries’ actions will have to be “measurable, verifiable and reportable”. The action plan states the intention of drawing up a "long-term global goal for emission reductions”, although no numbers or time horizons are mentioned explicitly. Instead, a reference is made in a footnote to the UN Intergovernmental Panel on Climate Change (IPCC) latest Assessment Report. This report recommends a 25-40 percent reduction of greenhouse gas emissions by 2020. The Bali action plan can be found here.

”We would have preferred that the road map clearly set out precise and binding emission reduction targets. Still, it is heartening that the US accepted a goal of emission reductions at all,” says Frederic Hauge, president of the Bellona Foundation.
“It was interesting to observe how, in the end, it was developing countries that managed to convince the US to agree. This exercise in Bali has been quite chaotic, but the outcome is positive. The US has moved in the right direction in the climate debate over the last two years,” Hauge says.

“There is no doubt that world leaders feel the pressure from the people of this planet,” he adds.

One of the main achievements of the Bali discussions under the UNFCCC was to include how to reduce emissions from deforestation and forest degradation in developing countries (known as “REDD”) on the list of topics for the next negotiations. As expected, the negotiations will also cover how to improve the international transfer of technologies both for adaptation and mitigation of climate change. It is emphasised that adaptation, mitigation and technology co-operation will require enhanced provision of financial resources and investment. In particular, this will include “positive incentives for developing country Parties” that take enhanced “national mitigation strategies and mitigation actions.” In other words, rich countries will be expected to pay for supplementary action by poorer countries against climate change and its impacts.

The UNFCCC negotiation process will be conducted under a new body, the Ad Hoc Working Group on Long-term Cooperative Action under the Convention. This Working Group will first meet in March or April 2008.

In parallel to the UNFCCC negotiations, the 174 Parties to the Kyoto Protocol (which most notably excludes the US) held negotiations on the future of the Protocol. Article 9 of the Kyoto Protocol stipulates regular reviews of its implementation. A first review was conducted in 2006, and it was decided in Bali to conduct a second review at the next Conference and Meeting of the Parties (CMP, also called COP/MOP) to be held in Poznan in December 2008. It was agreed that this review should be streamlined with, and not duplicate, the talks held under the UNFCCC. The remit for the review covers a broad range of “Kyoto-specific” issues, such as emissions trading and project-based mechanisms (such as the Clean Development Mechanism), and the possibility of limiting emissions in emerging economies by focussing on emissions from certain sectors. The decision on the review of the Kyoto Protocol can be found here. In Bali, governments also agreed on further guidance to various ongoing “Kyoto topics” such as the Clean Development Mechanism (CDM).

One issue followed closely by Bellona in Bali was the possibility of making carbon capture and storage (CCS) projects eligible under the CDM. Brazil with the support of India and a few small island states persistently blocked efforts in Bali to modestly agree to pursue discussions about the conditions that would need to be in place for such eligibility to be possible. The discussions concluded on a compromise that the Subsidiary Body on Scientific and Technological Advice (SBSTA) will synthesise submissions from Parties before its next meeting in mid-2008. At that meeting, submissions will be considered by the Parties before a final decision on the feasibility of making CCS eligible is taken in Poznan in December 2008.

More information from the UNFCCC Secretariat can be found on http://unfccc.int/2860.php.