BRUSSELS -During his key note speech to the European and US oil-industry-led workshop in Brussels last week, Bellona President Frederic Hauge presented new opportunities arising from CO2 capture and storing techniques, a controversial topic that Bellona has sought to bring into international environmental debate. 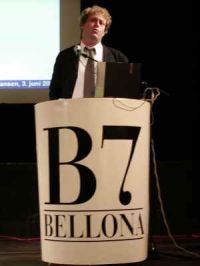 "If the fossil fuel industry wants to join Bellona in this fight, it will go from being part of the problem to becoming part of the solution," said Hauge at the conference organised by the International Petroleum Industry Environmental Conservation Association, IPIECA on October 21st.

The workshop brought together 180 high-level experts from academia, the European Commission, energy and environment authorities in EU states, as well as the petroleum industry, to discuss CO2 capture and geological storage as a vehicle for reducing emissions in light of the vast quantities of energy that will be needed over the coming century.

In his presentation, Hauge emphasised that producing enough energy from decabonised fossil fuel could help accelerate the transition to a hydrogen economy because it would produce enough of the hydrogen that would be needed for hydrogen use in the transport sector.

By taking advantage of the future CO2 demand for enhanced oil recovery—a process by which gasses are pumped into oil wells using pressure to wash out remaining oil deposits from their deepest crevasses—in the North Sea basin, Europe has the opportunity to make drastic cuts in CO2 emissions while at the same time produce enough energy to kick-start the hydrogen economy. Oil recovery is currently performed by the more dangerous method of pumping natural gas into oil wells.

Searching for solutions
Referring to Bellona’s substantial work on hydrogen in its Searching for solutions programme, Hauge presented his organisation’s latest policy paper called "Bellona’s vision for the hydrogen society." Bellona is starting work on a comprehensive report that will map out all areas linked to CO2 management, such as environmental, technical and financial issues.

Others at the two-day workshop included speakers from prestigious institutions such as the Massachusetts Institute of Technology and Standford University, the International Energy Agency, the British Geological Survey and the European Commission. The petroleum industry was represented by several speakers from Exxon-Mobil, BP, Shell, Chevron-Texaco and Statoil.

The conference examined the roles CO2 capture and storage may play over the next century and the risk management issues involved to ensure safe and secure geological storage. Other important issues such as public perception, policy and regulatory frameworks that form opportunities and barriers for CO2-handling was raised, as well as the financial framework conditions that are needed to encourage the development of a CO2 market. All presentations can be downloaded from www.ipieca.org.