MURMANSK – The launch of the lead ship in Russia’s new line of nuclear icebreakers, which was expected this year, has been pushed back to 2019, officials told Bellona.

Published on January 3, 2017 by Charles Digges 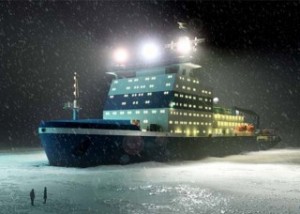 A mock up of the Arktika operating at night. (Picture: Atomflot)

MURMANSK – The launch of the lead ship in Russia’s new line of nuclear icebreakers, which was expected this year, has been pushed back to 2019, officials told Bellona.

Billed by official Russian media as “the most powerful icebreaker ever built,” the $2.5 billion Arktika exceeds standard dimensions, weighing in at 173 meters long, 34 meters wide, and with a water displacement of 33,540 tons.

It’s expected the ship will be able to plow through ice cover as much as 2.5 meters thick and will operate both at sea and on rivers in Northern Siberia like the Yenisei and the Ob.

At a time when older nuclear icebreakers are being retired, the government says the newline constructions will play a critical role in arctic oil and gas development and in escorting convoys through the currently underused Northern Shipping Route.

The route offers a five to seven day gain over passage through the Suez Canal, but poor infrastructure along Russia’s northern coast makes the choice unattractive for shippers, as well as environmentally risky.

That the Arktika might not make it out for mooring tests in 2017 and that its construction would be protracted became apparent last month. Vyacheslav Ruksha, Rosatomflot’s general director, said that was because most of the project financing came early in construction.

A government decree published in 2015 actually specified that the bulk project funding would be released in 2017, but yearly outlays have been patchy.

Another big reason for the delay, said Ruksha, is that building the vessel requires the cooperation of some 500 subcontractors and a retooling of the Baltic Shipyard’s manufacturing lines.

“The most contemporary icebreaker at present is the 50 years victory, which was slated for decommissioning in 2007,” Ruksha told Bellona. “Specialists needed time to restore manufacturing relations and updating nuclear icebreaker building experience.”

He said the ship was nearly 40 percent built as of last month. The vessel’s two reactors were completed in September of 2016. The complete ship is already visible at the Baltic Shipyard and the vessel’s propellers will soon be installed, Ruksha said.

He estimated the Arktika would be completed by 2019 and that it would be in use by 2020.