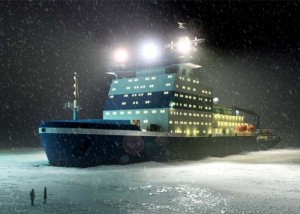 As evidenced by the trumpet call of official Russian media, the finalization who will build the ships is one more important flagstone in Russia’s path to dominance in the Arctic, and was cast in terms of a victorious battle against foreign influence and Russia’s indomitable declaration that it will not be marginalized in waters it considers its birthright.

The project to build the new generation icebreakers has been dubbed “Project 22220.”

Rossiiskaya Gazeta, one of the oldest and most dependable official mouthpieces of the Kremlin, gushed with the jingoistic zeitgeist that, “to the joy to all who have been deeply concerned about the rejuvenation of the Russian shipbuilding industry, the order to build the second and third generation of universal nuclear icebreakers has gone to the shipwrights of the Baltic Shipyard, and not some foreign wharf with only the participation of a Russian go-betweens, as some readers and viewers of certain Russian mass media had been spooked into believing.”

In excusing the practice of supposedly open tenders popularized during the Kremlin-scorned corruption of the 1990s – tenders which were, in fact, universally closed competitions rigged in favor or Yeltsin cronies – the paper explained the tender procedure for the new icebreakers by writing: “As predicted by visionary experts [the Baltic Shipyard] turned out to be the only participant whose application was allowed to pass on to the open competition for the right to build the icebreakers […]”

Neither Rossiiskaya Gazeta or any other Russian media – accept those that apparently scared their viewers into believing the tender could fall into the hands of foreigners – have indicated what other companies aside from the giant Unified Shipbuilding Corporation may have expressed the slightest interest in participating in the tender. A mock up of the Arktika by Atomflot. (Source: Atomflot)

The paper went on to reveal its cloak and dagger reporting legerdemain by saying that “Rossiskaya Gazeta was informed by the policy and communications departments of the Unified Shipbuilding Corporation that the commissioners of the state contract, and that was none other than [Russian state nuclear corporation] Rosatom, declared the competition invalid.”

“And this means,” the paper went on, “that, in accordance with current legislation, the only participant is declared the executor of the contract.”

In other words, all the information was bundled up in a nice little press release (in Russian) that went live on the Unified Shipbuilding Corporation’s website Wednesday.

According to the press release, the final contract for the three icebreakers remains to be signed – a tidbit Rossiskaya Gazeta selectively glossed over, and recast as a fait accompli.

But the Unified Shipbuilding Corporation’s Igor Ponomaryov said in the release, in no less triumphal terms, that the most important hurdle had been cleared.

“I consider the upcoming conclusion of this contract an event of worldwide resonance,” he said in the release. “Building a series of multipurpose nuclear icebreakers […] is another example of fruitful cooperation among Russian shipwrights and nuclear workers, the Unified Shipbuilding Corporation and [Russian state nuclear corporation] Rosatom, and is of utmost importance to the implementation of Russian projects in the Arctic.”

In fairness, independent news sources like the Barents Observer news portal reported that negotiations between the Unified Shipbuilding Corporation and the nuclear icebreaker port of Atomflot, the customer for the vessels located near Murmansk, had been protracted.

In 2013, the Russian federal government allocated 84.4 billion rubles ($2.3 billion) for use on the icebreaker project. Rosatom, however, haggled that the two vessels should come in at a price tag of 77.5 billion rubles ($2.1 billion), which the Baltic Shipyard turned down.

The new $2.3 billion tender price was announced in December 2013, the Barents Observer said.

The Baltic Shipyard has already begun construction on the new icebreaker’s prototype. Its hull was laid in November 2013 and is scheduled to be service-ready by December 2017.

The next two icebreakers are scheduled for delivery in 2019 and 2020. The ships will be run by Atomflot, Rosatom’s nuclear icebreaker port near Murmansk.

At 173 meters in length and 34 meters in width, the prototype Arktika, or LK-60, will be the most powerful icebreaker ever built, able to sail through ice cover as deep as three meters, the Barents Observer said.

What remains less examined is the Unified Shipbuilding Corporation’s recent history of lax safety measures, which have led since 2011 to three conflagrations aboard nuclear submarines at their shipyards.

In March this year, a fire of trash and debris broke out aboard the Krasnodar decommissioned nuclear submarine at the Nerpa shipyard, which is owned by the Unified Shipbuilding Corporation. The fire was chalked up to careless welding works igniting the rubbish.

In September 2013, the Unified Shipbuilding Corporation’s far eastern Bolshoi Kamen saw another fire break out aboard the decommissioned Pacific Fleet submarine, the Tomsk. The fire broke out in a ballast area of the submarine after a gas-powered saw was used to cut through a grate, setting an old rubber covering, cables and paint on fire.

There were no casualties, but Defense Minister Sergei Shoigu called for increased oversight of facilities where submarines are repaired, and Russia’s Investigative Committee opened an investigation whose results have not been made public.

A far more dramatic blaze occurred at the corporations Roslyakovo Shipyard near Murmansk in December 2011, when the operational Yekaterinburg nuclear submarine caught fire due to faulty welding works – while it was still loaded with nuclear weaponry – killing 19.

The fire burned for nine hours as its rubber stealth hull continued to smolder, and was not completely extinguished until rescue workers took the extreme measure of submerging the sub.

In all cases, human error was the main cause of the fatal and nearly fatal accidents at Unified Shipbuilding Corporation shipyards.

“From a technical point of view, it is reasonable to have state of the art nuclear icebreakers operating in the Arctic,” said Nils Bøhmer, Bellona’s general director and nuclear physicist. “At the same time the past few years have seen a lot of accidents relative to nuclear vessel repair yards that constitute a large human risk factor, no matter how advanced the ships being serviced.”

Bøhmer said that Russia must devote equal focus to safe repair conditions as it is to boosting its nuclear icebreaker prowess.

“This needs to be a focus of the Unified Shipbuilding Corporation, which has shown itself to be lacking in a clear understanding and implementation of an effective safety culture,” he said.