MURMANSK – The Government has asked Atomflot, Russia’s icebreaker base, to consider no longer just servicing civilian nuclear icebreakers, but military atomic vessels, including submarines, and future floating nuclear power plants as well, but no official decision has yet been taken. 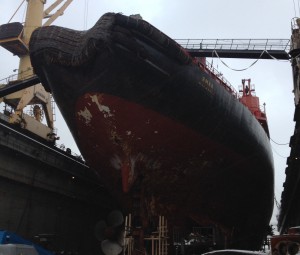 MURMANSK – The Government has asked Atomflot, Russia’s icebreaker base, to consider no longer just servicing civilian nuclear icebreakers, but military atomic vessels, including submarines, and future floating nuclear power plants as well, but no official decision has yet been taken.

The mandate would include not just upkeep on Northern Fleet vessels, but those in Russia’s Pacific Fleet as well. That would also include servicing floating nuclear power plants, which it is widely assumed Atomflot will be in charge of.

The plan implies that the government wishes to charge all of this dangerous work to a single enterprise and the civilian engineers and specialists who work there.

Upsides and downsides of the project

According to Andrei Zolotkov, chairman of Bellona Murmansk, the notion of concentrating the service of both civilian and nuclear powered vessels with the realm of one enterprise has many advantages.

“The result could lead to the unification of all repair and service operations for nuclear installations, including reactor refueling,” he said. “Currently, the equipment for refueling military reactors and civilian ones have definite differences.”

But Zoltkov has questions about the economics of such a move, as well as, most importantly, the safety of transporting nuclear service vessels from Murmansk to the Far East and back again.

“This not a small distance for ships with nuclear installations will take place along the Northern Sea Route, where the period of safe and calm navigation is rather limited,” he said.

“I would assume that on the way back from the Pacific, ships with nuclear installations will have spent nuclear fuel on board and that this spent fuel will not be in shipping containers,” he said. “Transporting spent nuclear fuel this way over considerable distances is not a positive factor for nuclear safety.”

Zolotkov’s comments also highlight a critical lack of infrastructure for handling distressed vessels along the Northern Sea Route. This was brought into stark relief in September, when the leaker tanker, the Nordvik, was left adrift for two weeks, and requests for rescue went ignored until two icebreakers that were accompanying the Peter the Great – Russia’s flagship battle cruiser – on a vanity voyage through the Northern Sea Route were allowed to cut loose from the flotilla and guide the Nordvik to safe waters.

What would happen if a ship packed with spent nuclear fuel ran into the same difficulties?

Aside from developing the notion of a unified complex for all of Russia’s nuclear vessels, Atomflot will in the next few years be busy equipping berths for universal icebreakers. Russia has already announced plans to build the world’s biggest icebreaker with the new RITM -200 reactor, which produces 175 Megawatts of power.

The icebreaker requires a new type of larger dock with significantly more loading capacity as well as new refueling technologies for its reactor.

The construction contract for the Baltiisky Shipyard will be handling the construction of the leading universal icebreaker was signed on August 23, 2012. According to the contract, delivery of the ship to Atomflot is to take place by December 30 2017.

But there are already signs of delays.

“At present, the work is about two months behind,” said Atomflot Deputy Director Mustafa Kashka. “This is due do to problems with turbine installation and other technical issues.”

He also said that the tender for forging equipment for the second and third icebreaker of this new generation was pushed back to March. The delays were mostly the result of squabbles over what kind of equipment the news vessels need, Kashka said.

“We think that all three icebreakers of this project should have the same equipment installed,” said Kashka.

As to the mooring the huge new icebreaker,  Atomflot’s deputy facilities director Nikolai Mantula noted that the port already has a draft plan for its port. The plan includes a 100 ton crane for loading and unloading, a communications infrastructure, and a repair workshop, the material for much of which still has to be found and purchased, said Mantula.

At current, there is only one dock in the Kola Peninsula area that could service the new icebreaker, a floating dock that belongs to the military’s ship repair yard No 82, notorious for the Yekatrinburg submarine fire. This particular dock is constantly burdened with military projects.  A new dock for the new icebreaker is much more expensive and will end up costing Atomflot around 10 billion rubles ($270 million).

No decision has yet been made because huge changes are expected in the area of shipbuilding with the soon to come presence of Rosneft, Russia’s state oil company, to the region.

Russia’s Deputy Prime Minister in charge of the defense industry Dmitry Rogozin intends to turn the local village of Roslyakovo into a center of Arctic shipbuilding for Russia’s oil majors. Russian Ministry of Defense and the Ministry of Industry and Trade have already agreed with Rosneft on a plan to relocate Roslyakovo residents for the construction of the shipbuilding yard.

The new icebreakers will also require new service ships, which still need to be built. This is because the new icebreakers will have reactors that are fundamentally different from those on other nuclear powered ships. In such a case, service ships such as the Imandra  are of no use. The new nuclear service vessels will also have to serve the coming fleet of floating nuclear power plants, and store their spent nuclear fuel.