The Russian nuclear icebreaker, the Rossiya, has left the Murmansk-based icebreaker port of Atomflot on Tuesday en route to the St. Petersburg area on what is likely to be its last voyage of Russia’s forth-oldest ship of this type.

Published on January 17, 2013 by Charles Digges 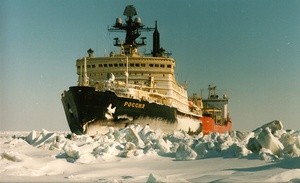 The icebreaker will likely be taken out of service because it has surpassed its intended useful lifespan.

As of 11:00 Central European time  Thursday, the Rossiya was located 200 kilometers east southeast of the Northern Norwegian city of Bodø travelling at 17 knots, according to the Norwegian Coastal Administration (NCA).

Nils Bøhmer, Bellona’s general manager and nuclear physicist expressed concern that the Rossiya would be completing the some 5000 kilometer along Norway’s 100,000 kilometer-long coastline as it steams to the Gulf of Finland where it will be deployed until April to help with commercial ship navigation in icy conditions, he said.

He said the potential for accidents aboard the vessel such as fires or reactor trouble were heightened because of its age. The vessel put to sea in 1985.

Bøhmer said NCA officials were notified on Christmas that the Rossiya would be sailing along its coast, but – as has happened in the past to the chagrin of Norwegian authorities  – officials were given no specific dates for the voyage.

The ship’s route will take it from Russia’s far north port of Atomflot, along Norway’s western coast, through the narrow Øresund between Sweden and Denmark to the Gulf of Finland, the Barents Observer news portal reported.

The Rossiya has experienced no major radiological or other technical problems during its service period, and has even been used to shuttle tourists to the North Pole.

But other icebreaker mishaps over the past several years nonetheless give Bøhmer pause.

“The age of such vessels, the wear on reactors, and examples of other mishaps aboard ships of Russia’s nuclear icebreaker fleet are a cause for concern to Norway’s public and the population of those countries the Rossiya will also pass,” he said.

A recent example was a fire aboard Russia’s Vaygach nuclear powered icebreaker, which killed two in December 2011.

The Vaygach, which had departed from Dudinka 2,800 kilometers northeast of Moscow, was breaking the way for the freight carrier Kapitan Danilkin along the Yenisei river that runs north through Siberia when the blaze broke out.

Though the fire left the Vaygach’s reactor untouched, it burned for three hours at the mouth of the Yenisei were it spills into the Kara Sea.

A third man suffered burns and smoke inhalation, but the Vaygach eventually returned to Atomflot under its own steam. The Vaygach put to sea in 1990.

In another 2011 incident, this one in May, the Russian nuclear icebreaker Taimyr was forced to return to port when tiny cracks in the first cooling circuit of the ship’s reactor were found to be leaking large quantities of cooling water.

As loss of cooling systems was the primary cause for the disaster at Fukushima, the Taimyr’s coolant mishap was treated seriously, and with an uncharacteristic degree of openness by Russian officials that worked to return the ship to port, particularly the Emergency Services Ministry.

The coolant loss had caused increased radiation levels in the reactor room of the Taimyr, and upon visual inspection, a hole, which was leaking some 20 to 30 liters of cooling water a day, was discovered in the welding, a highly placed source within Atomflot, told Bellona at the time.

The cause of the was thought to be either metal fatigue, faulty welding or both. The Taimyr, like theVaygach, was working in the Yenisei Gulf on the northern coast of western Siberia in the Kara Sea when the coolant leak was discovered.

The 23-year-old Taimyr was able to return to port under the power of its diesel generators after the reactor was shut down, and was escorted back into port by two other icebreakers, the Yamal, and the Rossiya itself.

In an effort to allay fears of any ongoing radiological leaks, Atomflot officials held a press conference aboard the Taimyr when it arrived back in Murmansk harbor.

Two fires on the 50 Let Pobedy before it sets sail

And in 2005, the 50 Let Pobedy – or 50 Years Victory, Russia’s newest icebreaker – caught fire in 2005 at the Baltiisky shipyard while still under construction. No radiation releases occurred as no fuel had been loaded onto the ship. The vessel also caught fire while under construction in 2004.

The keel of the 50 Let Pobedy was laid in 1989 and it was floated at the end of 1993. But due to the lack of financing, construction was suspended. It is now currently part of Russia’s fleet of nuclear icebreakers.

Captain Alexander Spirin told Arctic TV in quotes reprinted by the Barents Observer that, “This could be the last voyage [the Rossiya] ever makes, as it has exceeded its lifetime.”

“Of course it is sad. The vessel is still ‘alive’ – all technical equipment still works and maintenance and repair have been managed on schedule,” said Spirin in his broadcast remarks.

It is still uncertain when Rossiya will be laid up and what further plans there are for its dismantlement. The Rossiya is the world’s fourth nuclear-powered icebreaker and in 1990, it became the first Soviet vessel to take foreign tourists to the North Pole.

The Rossiya has also made the journey to the Gulf of Finland before, in 2011, when it was dispatched there to help with commercial navigation during an unseasonably cold winter. During that time, the Barents Observer reported, it helped free 58 vessels that were locked in the ice.