MURMANSK – The Russian bill on the Northern Sea Route – debated in the upper chamber of Russia’s Duma, the Federation Council, on April 24 – is nearly ready for it’s second Duma reading, but there remain many sticking points on many points. The second reading is planned for May.

Published on April 30, 2012 by Anna Kireeva, translated by Charles Digges 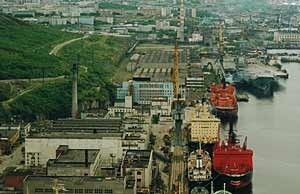 Use of the Northern Sea Route for heavy shipping traffic is a growing concern for environmentalists, and threatens the most pristine waters left on the planet. But legislative debate on regulating Arctic navigation has failed to take any environmental concerns into consideration – and debate over the new bill as it approaches its penultimate hurdle in the Duma is driven by expansion of commerce and kick-backs Russia can expect from international shippers.

According to Senator Alexander Matveyev, deputy chief of the Federation Council Committee on Federative Organization, Regional Policy, Local Self-Government and Northern Issues, the chief task upon adopting the law is clear:  “[To] guarantee the defense of Russia’s national interests in conditions of attempts to internationalize the Arctic aquatic area.”

These national interests thus far have little to do with preserving Arctic waters from being fouled and delicate ecosystems churned up by the roiling seas of heavy shipping.

Despite a few bumpy patches, the Northern Sea Route legislation seems posed for passage in some form or another, none of which are favorable to the environment.

Matveyev considers the bill “On introducing amendments in several legislative acts of the Russian Federation in terms of regulation of trade navigation in the Northern Sea Route aquatic area” has stirred up an ambiguous reaction namely because “it looks at the Northern Sea Route not as a historically existing nationally unified transport line of the Russia Federation, but just a water body.”

Aside from this, arguments have erupted over whether the government or the law itself should establish the boundaries of the Northern Sea Route, as well as the point on Arctic tolls, which “are a blow to Russian transport operators and make deliveries more expensive.”

Administration of the Northern Sea Route

Vitaly Kluyev, deputy director of the department of government policy in the area of sea and river transport of the Russian Ministry of Transportation, noted that the proposed legislation would revive the federal state institution of Administration of the Northern Sea Route. It will have administrative functions focused on organizing icebreaking and pilotage escort, assuring radio contact, management of pollution prevention, search and rescue operations and hydrographic maintenance.

Klyuev said that the Russian Ministry of Finance is prepared to designate 27 million roubles € 700,000) for the administration from the state budget.

Will the Northern Sea Route be free for all?

Refereing to the 1982 UN Convention on the Law of the Sea, Klyuev  underscored that no limitations can be placed on navigation of the route regardless of nationality – and that all can sail it for free.

The Ministry of Transport countered that Russia would be providing all of the infrastructure for use of the route leading many to insist that the Northern Sea Route be a toll road.

Others in the debate argued that tolls were not the solution but rather charges for assistance in pilotage and icebreaker escort, as well as for infrastructure development.

Profitability and the Northern Sea Route

Klyuev called the development of the Northern Sea Route unprofitable given that Russia would be undertaking responsibility for communicating with foreign vessels navigating the waters, providing meteorological and hydrological data, rescue operations for free as the UN convention stipulates it must.

But others in the Federation Council debate disagreed.  Alexander Pilyasov, director of the Russian Academy of Sciences’ and Ministry of Economic Development’s Center for Arctic and Northern Economics, and Council on the study of industrial efficacy, said “in the short term perspective we will certainly not receive profits, but in the long term it is doubtless we will.”

Pilyasov said that the reality of global warming must be taken into consideration – a consequence of which means less polar ice.

“The accessibility of this route is growing as it the appetite for its internationalization. In such conditions it is very important that Russia suggest, or even impose, such services so that it is profitable,” he said.

Russia can make its own rules

Some participating in the debate said Russia could increase its chokehold on navigation through the Northern Sea route by enforcing the observation of stricter environmental norms, stiffening regulations on “bringing vessels into accord with ice conditions,” demanding crews pass qualifications and other tests of their skills working in northern waters and a host of other suggested regimens.  The Federation Council specifically discussed the possibility of introducing legislative rules stipulating obligatory icebreaker escorts and the use of specialized hydro-meteorological services, as well as ship insurance and rescue operations.

Mikhail Suslin, chief inspector of Sovcomflot, the Russian state petroleum and liquefied natural gas shipping giant, Russia must more actively come to grips with its own national regulations on the use of the Northern Sea Route. While international organizations are only discussing the Code for polar navigation, vessel navigation regulation will nonetheless be guided by rules that Russia suggests.

The debates noted that Russian vessels assisting northern transport must be immune to tolls, should these be introduced to the law. Further, they should be afforded discounts on icebreaker accompaniment.

Mutstafa Kashka, deputy director of Atomflot, Russia’s port for its icebreaker fleet, the cost of building a new dual-depth icebreaker, that can function at sea as well as in Russia’s shallower icy rivers, that is due to be launched this year tallies up to 36 billion roubles.

Russia is planning on building at least three dual-depth icebreakers, but the cost of the lead project continues to grow more bloated – so the beginning of shipbuilding keeps getting put off. In Septmber of 2010, Atomflot head Vyacheslav Ruksha announced that upon completion of the final analysis, the price tag of the icebreaker skyrocketed from 17 billion roubles to 24 to 25 billion roubles. Further he announced its launch year as 2016.

Kashka said that should the keel be laid this year, the new icebreaker will launch in 2018. Meanwhile, Russia’s Arctic fleet will experience a lack of nuclear icebreakers, said Kashka.

“Despite the fact that we have been able to extend the usage period of some of our vessels, the icebreaker Rossiya will next year be entirely expended, and a few other vessels’ usage periods will have to be extended,” he said. The number of cargoes escorted by Atomflot’s icebreakers in 2010 and 2011 rose by some eight times. Kashka also noted that the increase of foreign traffic in Arctic waters has correspondingly risen.

Not a word on the risks

Unfortunately the Federation Council discussion of the bill made no note of the environmental safety of the North Sea Route undertaking. Igor Kudrik, Bellona’s Russian nuclear safety project coordinator said that as of today, there is scant infrastructure along the Northern Sea Route. It would take an enormous investment to ensure against oil spills just for starters.

“The growth in volume of cargo traffic will certainly trigger emergency situations,” he said. “How much this will cost in the severe climactic conditions of the arctic no one knows  – and I don’t think it will be cheap. If the cost is laid on the shoulders of the cargo transporters, then the Northern Sea Route may not be profitable.”

Kudrik asserted the necessity of impact studies that would be caused by intensive shipping traffic on the Arctic’s vulnerable environment.

“Bellona has always taken the position that the Arctic should not be viewed as a site for the intensive introduction of industrial activities,” said Kudrik. “This pertains to all countries [bordering on] the Arctic. The Arctic and Arctic seas are the cleanest place on our planet, and as such they should remain.”