MURMANSK – Russia yesterday announced plans to send an atomic-powered icebreaker that developed a reactor coolant leak earlier this month back out to sea after conducting repairs on the reactor. 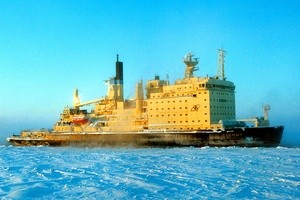 The 23-year-old Taymyr yesterday successfully docked at its home port of Murmansk near the Norwegian border after using back-up diesel engines to make its way back from the Kara Sea in the Arctic. The reactor, whose capacity was reduced to 30 percent, was shut down all together for its return.

Bellona was pleased with the candor with which officials handled the incident, even though their earliest reports on leaking reactor coolant had been incomplete.

The vessel was escorted to port by two other nuclear icebreakers, the Rossiya and the Yamal, Rosatomflot officials told a press briefing that they held aboard the stricken Taymyr to allay fears of radiological dangers.

Rosatomflot nuclear fleet chief Vyacheslav Ruksha said the vessel remained safe and attributed the radiation spill to a micro-fracture that resulted in the leakage of 6,000 litres of nuclear reactor coolant.

“We were lucky because this situation developed at the end of the voyage. But we had to change our plans because it was due to set sail for the Arctic in June,” Ruksha told a Murmansk press briefing.

“Now the icebreaker will undergo repairs, and no one knows how long they will last. Practice shows they could stretch between two weeks and two months,” Ruksha said. He also confirmed that this was the second such leak to affect the 21,000-tonne craft in a year.

According to Rosatomflot’s chief engineer Mustafa Kashka, the icebreaker has worked for 136,000 hours, and its operational life span has been extended to 150,000 hours.

“We hope that this incident will not interfere with extending the working resources of the Taymyr to 170,000 to 200,000 hours,” said Kashka.

Upon its arrival at the Russian nuclear icebreaker port at Atomflot, the vessel was checked and cleared by the local branch of the Sanitary and Epidemiological Inspectorate.

“Imagine how it would have been if after the events at Fukushima we remained silent about such an insignificant incident, and out friends at Bellona found out about it,” joked Ruksha at the briefing. “Moreover, by new standards we are obligated to inform even about such incidents.”

Ruksha seemed to forget in his remarks that the initial May 4 statement from Rostamflot about elevated levels of radiation aboard the Taymyr papered over the fact that the vessel’s reactor coolant system was crippled – the main source of ongoing difficulties at Fukushima Daiichi – and was leaking some 20 to 30 litres of contaminated water through a micro-fracture in a weld or metal fatigue.

This information only came to light in comments to Bellona Web from an anonymous, highly placed official at Atomflot, who made known the full extent of the damage. Rosatomflot to came clean about the true nature of event at a May 5 press conference.

Still Bellona is pleased with the candor that Rosatomflot strived to achieve over the incident.

“Bellona welcomes the openness of Rosatomflot and thanks it for timely information about the incident,” said Bellona Russian nuclear industry expert Igor Kudrik in a statement. “This helped avoid rumors and speculation. We depend on such openness should other incidents occur that related to aging nuclear installation on icebreakers, which have reached the end of their engineered life spans but which continue to be used,” said Kudrik.

Ruksha said the leak in the first reactor compartment on the Taymyr is no bigger than one millimeter.

“Tomorrow we’ll start work to find the source of the leak that has been discovered,” Ruksha told reporters. “This is just a matter of time: The actual gas compensation system is [under the reactor unit], so in order to find it, we will have to pry open several [layers] of biological protection.”

Chief engineer Kashka said he was “99 percent” sure that the micro-fracture is in an accessible place for repairs.

“I am sure that our specialists will be able to make the repairs,” he said. “The only question is how much time it will take.”

Ruksha said the gas compensation system is the weakest element of nuclear icebreakers.

“These issues have already been resolved for the next generation of icebreakers,” he said. “Whatever the case, after our investigation and the discovery of the leak, we will definitely tell the public about the results,” said Rushka.

According to Andei Zolotkov, director of Bellona Murmansk, regulatory structures and engineering organizations will surely permit further use of the Taymyr’s reactor after the the micro-fracture is discovered and repairs are carried out.

“But the next micro-fracture will cast real doubt on the safe use of reactors of this type with prolonged engineering life spans,” said Zolotkov.

The Taymyr is one of two nuclear icebreakers built for the Soviet Union by Finland in the late 1980s. The US-based GlobalSecurity.org research organisation said the two Finnish ships were “originally designed for 100,000 hours of reactor life, but this was extended first to 150,000, then to 175,000.”