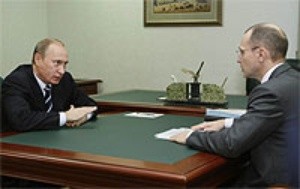 Russia plan in coming years to build three to four new generation nuclear powered icebreakers to buttress the aging fleet that Rosatom took under its control from the Murmansk Shipping Company in August.

During the meeting, Putin highlighted the need to evaluate the condition of the nuclear-powered icebreaker fleet and the elaboration of a plan for the fleet’s development, the Russian government website reported.

“We must assess the state of the fleet and determine its development perspectives,” Putin said, adding that “I have in mind, of course, our plans for the further development of the Northern Sea Route”.

According to the transcript of the meeting published on government.ru, Kiriyenko said that Rosatom is currently developing a programme for the fleet’s development, and  underscored the need to build new vessels.

“If we do not build new vessels, then our opportunities in the Arctic will decline after 2015,” he said, adding that a pivotal task is building new icebreakers – and the funding to do so.

Currently, Russia has seven nuclear-powered icebreakers in operation, the newest of them the 50-years Victory was launched in 2007. Last week, icebreaker Arktika was officially taken out or service.