An oil spill near Norilsk above the Russian Arctic Circle has crept into a glacial lake after seeping through barriers meant to staunch its flow, the Tass newswire has reported, increasing fears that the slick could worsen and reach the Kara Sea. 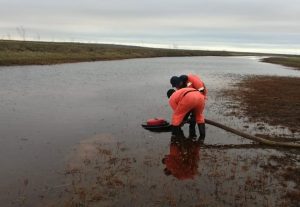 Cleanup work on the oil spill in the Russian Arctic. Credit: Morspas.com via the Barents Observer.

An oil spill near Norilsk above the Russian Arctic Circle has crept into a glacial lake after seeping through barriers meant to staunch its flow, the Tass newswire has reported, increasing fears that the slick could worsen and reach the Kara Sea.

The spill has been forming since July 29th, when a fuel tank at a plant owned by a subsidiary Norilsk Nickel collapsed, leaking 20,000 tons of diesel oil into the Ambarnaya river.

President Vladimir Putin has declared a state of emergency to contain the accident, but the response was delayed – local officials only learned of the spill days later, after photographs of the accident made their way to social media.

“The fuel got into Lake Pyasino,” Alexander Uss, the governor of the Krasnoyarsk region said Tuesday, referring to the Arctic water body 20 kilometers from the site of the spill.

“It’s impossible to predict how it will bear this load,” Uss continued in an interview with local broadcaster Yenisey. “It’s important now to keep it from reaching the Pyasina River, which goes further north.”

Bellona is concerned by news that pollution had made its way to the lake.

“Unfortunately, this is a sign that the oil spill is moving with the water system and is constantly hitting new areas,” says Oskar Njaa, head of Bellona’s Russia department in Oslo.

As noted by The Moscow Times, Lake Pyasino is a major body of water and the source of the Pyasina River, which is of vital importance to the entire Taimyr Peninsula – the Krasnoyarsk region’s northerly tip. The Pyasino then flows into the Kara Sea, which is part of the Arctic Ocean.

Bellona has outlined a number of possible solutions to address the cleanup, and the organization’s Russian offices forwarded the recommendation to Norilsk Nickel on Tuesday.

“If there is any possibility that we can contribute positively and if there is any expertise we have in this field in Norway, then we should make the effort,” says Njaa.

One of Bellona’s chief recommendations is that cleanup workers use an active system to collect oil products from the river, as opposed to a passive one. An active system, which envisions deploying vessels towing a bag to collect oil, is better suited to river currents.

The organization also recommends using surplus biomass, such as bark and wood chips, to absorb oil along riverbanks.

Bellona hopes to maintain a dialogue with Norilsk Nickel in order to help develop more specific methods of addressing the spill.

“If the pollution has reached Lake Pyasino, the question is whether the oil concentration is large enough that it will be possible to collect the spill, and whether an active collection system can be used effectively on the lake and in the relevant parts of the river,” says Njaa. “This depends on the local conditions.”

Bellona stresses that limiting the creep of the spill is critical. The organizations experts are in contact with various public and private institutions to clarify how Norway can help with alleviating the spill.

“Bellona believes that the Norwegian authorities should actively provide expertise and equipment to help reduce the pollution,” says Njaa. “Ultimately, on-site operations management must decide what resources are needed, but here you have to be on the supply side if asked.”

He added that how this spill is managed would provide insight on how such accidents in the Arctic’s challenging conditions could be handled in the future – know-how that would be useful to Norway as well.