A defective electric engine aboard Russia’s newest nuclear icebreaker has set off a cascade of difficulties that will postpone its scheduled May delivery date by at least several months, frustrating Moscow’s drive to tame Arctic sea routes as part of a broad economic plan. 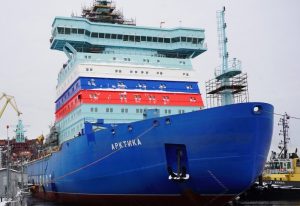 A defective electric engine aboard Russia’s newest nuclear icebreaker has set off a cascade of difficulties that will postpone its scheduled May delivery date by at least several months, frustrating Moscow’s drive to tame Arctic sea routes as part of a broad economic plan.

The problems aboard the Arktika icebreaker, slated to be the largest in the world, came to light in February, when a 300-ton electric propulsion motor on the vessel’s starboard side – which has nothing to do with the nuclear propulsion system – failed during sea trials.

By this month, it has become clear to officials that there are no easy fixes are in sight, and that the delayed delivery of the enormous vessel from a St Petersburg shipyard to its stationing in Murmansk means a number of older nuclear powered will be forced to continue operations.

“I don’t think we know all the details of this incident,” Andrei Zolotkov, a former nuclear icebreaker technician and the head of Bellona’s Murmansk offices, said. “The constant failure to meet the deadline to put new nuclear icebreakers into operation is already damaging to the builders’ reputations. The failure of the [electric motor] is another big minus.”

The Artkika is the lead vessel of Russia’s LK60Ya nuclear icebreaker line, which Moscow sees as a central tool for developing the frozen Northern Sea Route, the Arctic shipping artery on which President Vladimir Putin has staked much of Russia’s economic future.

Like its sister vessels – the Ural and the Sibir – the Arktika has a displacement of 33,500 tons, and measures 173 meters from bow to stern. The price tag of each new ship is about $550 million.

The Arktika’s twin RITM-200 reactors will deliver a combined 175 megawatts of power, making it the most powerful civilian vessel in the world. And like its sister vessels, the Arktika is named for an earlier nuclear icebreaker, in a nod to Soviet heyday of polar exploration.

These newer vessels will be facing newer tasks. Putin has demanded that cargo tonnage flowing through the Arctic reach 80 million tons by 2024 – a huge increase over present levels – in hopes of making the Northern Sea Route a competitor to the Suez Canal.

With these new vessels, Moscow say it can extend the annual navigation season in the polar region – which, even in the grip of climate change, is only about three months per year

But the Arktika’s delivery deadline to Atomflot, Russia’s nuclear icebreaker headquarters in Murmansk, has already undergone a series of revisions.

The vessel has been on the drawing board since 2012, and was first due for commissioning in late 2017. When that date arrived, the deadline was pushed back to December 2019 – and that soon became May 2020.

Such is the case for the Arktika’s sister vessels. Although the Baltic Shipyard in St Petersburg has floated their hulls, they have yet to be delivered to Murmansk and been at Atomflot.

This leaves Moscow’s push to tame the Arctic running behind. To make up for the delays, Rosatom, Russia’s state nuclear corporation, has extended the operational lifetimes of three older icebreakers.

They will join the other old guard workhorse, the “50 let Pobedy,” or 50 years Victory, which Atomflot still has in operation.

For the moment, prospects for the Arktika’s launch appear dim for this year. The faulty engine can’t be swapped with one from another icebreaker, and a new one can’t be built before 2021.

That, said Zolotkov, might not stop the vessel from being delivered to Atomflot under so-called “trial operation” – a measure that allows various officials to claim at least some progress. But given the number of issues such a move would leave unresolved, Zolotkov discounted it as a possibility.

“A vessel or ship should leave the shipyard in good order and ready for real work, and not imitate the fulfillment of plans and deadlines that have long been violated, ” Zolotkov said.