The Arctic Frontiers conference convened in Tromsø, Norway this week, offering an important annual forum for politicians of Arctic countries to discuss polar development, and to address the region’s problems in an international and cooperative manner. Conspicuously absent from these discussions are any high-ranking Russian politicians or officials. 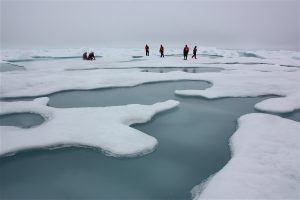 The Arctic Frontiers conference convened in Tromsø, Norway this week, offering an important annual forum for politicians of Arctic countries to discuss polar development, and to address the region’s problems in an international and cooperative manner. Conspicuously absent from these discussions are any high-ranking Russian politicians or officials.

Leading experts meet every year in this northerly city, with a population of less than 80,000. They’re politicians, economists, big-business representatives, scientists and ecologists. And every year, they meet to discuss the Arctic’s sensitive issues and to share best practices for confronting its unique environment – and humanity’s impact on it.

All Arctic countries have problems a problem in common: How to develop the northerly regions. There’s the quick and easy way. But developing it in a manner that affords a decent standard of living for the workers and specialists remaining in the area and create families will lead to real population growth.

The development of fossil fuel production in the Arctic leads to constant environmental damage, and all regional countries are interested in the use of best available technologies, observing high ecological standards, equitable interaction with indigenous peoples, balancing the interests of industry and the environment, and preserving common resources.

Climate change, one of the biggest current threat to the world, is especially acute in the Arctic. Yet no single Arctic country can begin to cope with global warming on its own. For this, we need not only specific goals to reduce carbon dioxide emissions and to reject the use of fossil fuels – goals we see in a number of Scandinavian countries – but we need efficient international cooperation.

Norway, in particular, is moving ahead at full steam toward the goal of reducing harmful emissions, aiming to stem its planet carbon dioxide emissions by 40 percent by 2030 compared with 1990 figures. These emissions, says Norway, are causing climate change. Therefore, the country says it cannot remain indifferent to the fact that Norway, as an Arctic country, should be among the first to face its responsibility.

“The effects of climate change are most pronounced in the Arctic,” Norwegian Foreign Minister Ine Eriksen Søreide told the forum. “Last year the temperature in Svalbard rose 3.3 degrees above average, while temperatures above average have been observed there for 31 consecutive years.”

Sweden’s thinking is much the same.

“We are switching to carbon-free production in Sweden,” Matilda Ernkrans, Sweden’s minister of higher education and research, said.

“That’s because, by 2045, Sweden should be a country with a sustainable economy that does not use fossil fuels.”

Unfortunately, for several consecutive years, the talks at this famous and highly regarded forum have taken place in the absence of senior representatives of the Russian government, despite the fact that Russia has both the largest Arctic population and the most intensive industrial production of any other country bordering the polar region. Its absence at the talks hasn’t gone unnoticed.

Likewise, it is no secret that Russia inherited a terrible legacy of environmental malaise, obsolete industrial production and a lack of energy efficient technologies from its Soviet parents.

Still, the country has successfully solved a number of its pressing problems in cooperation with other countries. That’s particularly true of Northwest Russia’s legacy of Soviet nuclear and radioactive waste, which, with the help of numerous European partners, is becoming a thing of the past.

All the while, Russia is designing vast strategies for Arctic development, but has so far provided the world public with few specifics. What are the environmental standards to which it will adhere? What technologies will it use in implementing its Arctic projects that will reduce emissions? While Russia has paid lip service to environmental concerns as it builds in the Arctic, these goals remain general. The Arctic Frontiers conference would have been an ideal place to hear what Russia plans to do. Unfortunately, Russia has missed that opportunity – again.