The Russian government has allocated $2 billion to build a goliath high-tech nuclear icebreaker it claims will keep the Arctic ice free for shipping on a year round basis – a major move toward creating a shipping lane through the frozen polar region.

Published on January 27, 2020 by Charles Digges

The Russian government has allocated $2 billion to build a goliath high-tech nuclear icebreaker it claims will keep the Arctic ice free for shipping on a year round basis – a major move toward creating a shipping lane through the frozen polar region.

The Leader ­– or Lider, in Russian – as the vessel is known, has long existed as sort of engineering myth: Bigger and more streamlined than its boxy icebreaking cousins, it would have the power to chew through ice up to five meters thick at a speed of 10 knots, clearing a 50-meter-wide swathe of navigable sea for ships following in its wake.

The Kremlin has made its construction the centerpiece of its expansive Artic strategy, which aims to open the Northern Sea Route – an ice-bound 6,000-kilometer shipping artery from Europe to Asia that Moscow hopes will rival the Suez Canal. But the ambitious vessel – which more resembles an oligarch’s prize yacht than an icebreaking muscle-ship – has remained something of a mirage until now.

Outgoing Prime Minister Dmitry Medvedev, in a final act in office, signed the resolution directing the Leader’s funding to Rosatom, Russia’s state nuclear corporation, and setting a schedule for the builds, the Barents Observer reported. According to the resolution, the lead icebreaker in the Leader class is to be finished by 2027, with two more following between 2027 and 2035.

By that year, says Rosatom, the Leader vessels will make the Northern Sea Route – which is covered by ice for nine months out of the year – navigable year round.

Since Soviet times, Moscow’s nuclear icebreaker fleet has been the largest in the world, and the Leader line will add to three other mammoth icebreakers Russia has launched in recent months.

The new Arktika, which replaces an older vessel by the same name, began sea trials in December and is slated to join Russia’s icebreaker fleet this year. At 130 meters long, and powered by two RITM-200 reactors, the Arktika is the lead vessel in the LK-60Ya icebreaker line. 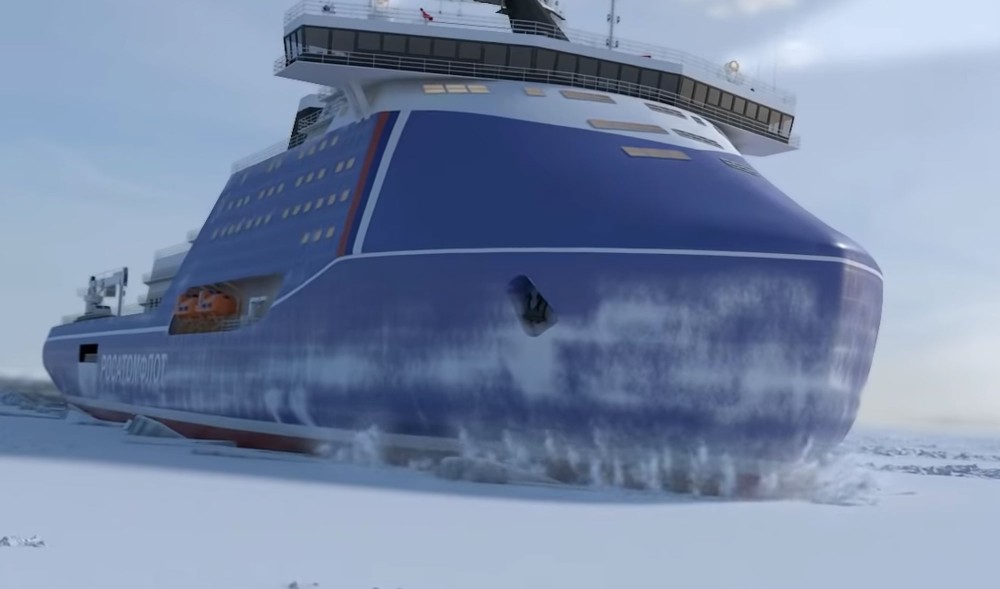 The hulls of the Arktika’s sister vessels in that line, the Ural and the Sibir, have also been launched by the Baltic Shipyard in St Petersburg, and are likewise named for earlier Russian nuclear icebreakers that have been retired. They are expected to take to the seas by 2022.

But the Leader stands in a category all its own. Billed to be more than 200 meters long, it will dwarf its forbears in Russia’s civilian nuclear fleet. Certain specifications in its hull design would also make it far more agile in the water than its older cousins.

But that’s not all. The new vessel’s space age design offers an upgrade in aesthetics over icebreakers past.

It was five years ago that the idea for the Leader emerged in the pages of a trade magazine published by Russia’s Unified Shipbuilding Corporation.The cover of the magazine’s 24th edition featured a mock-up of the sleek vessel viewed from the point of view of a landing helicopter as it steamed through fluffy islands of ice. It was ship that would have looked more at home on the Riviera. 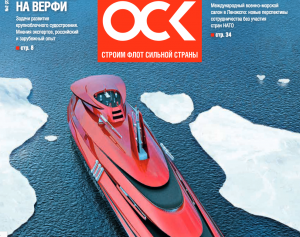 The Lider's debut on the cover of the Universal Shipbuilding Company's magazine. Credit: oaoosk.ru

The project lay dormant until last year, when Rosatom, Russia’s state nuclear corporation, wrote legislation giving itself total control over the Northern Sea Route. Suddenly, the Leader was no longer just a pinup swooned over by wishful industry insiders.

According to reports in Russia’s shipbuilding trade press, the Leader vessels will come equipped with materials capable of “self-diagnosing” metal corrosion, and will further be able to “self-heal” when damage is detected.

And the superlatives don’t end with that. Many in Russia’s official press have championed the Leader as nothing less than the engine of the country’s economic turnaround.

In that sense, the Leader doesn’t differ much from the justifications the Russian government offers for the three other monster icebreakers it’s currently building.

Those, too, have been touted as the answer to Russia’s economic prayers, and together they are expected to shepherd convoys of liquid natural gas from the Yamal Peninsula to ports in Asia and Europe, and keep the Northern Sea Route open for traffic year round – In essence, the very same resume presented by the Leader.

But where funding for those vessels had been committed long ago, the Leader’s funding remained uncertain until Medvedev’s resolution was published.