Rosatom says shipping is up on the Arctic – despite environmental concerns

Published on November 26, 2019 by Charles Digges

At present, shipping tonnage via the route is poised to reach 30 million tons by the end of this year – up from the 20 million tons reported in 2018 – most of it cargo from the Yamal LNG project and oil fields run by Russia’s state hydrocarbon giant Gazprom. Coal also figures heavily in the new statistics.

The steady rise in cargo tonnage is sure to please the Kremlin. Russian government ministries have been scrambling since 2017, when President Vladimir Putin decreed that shipping volumes through the Northern Sea Route must meet 80 million tons by 2024.

The new figures were reported by Rosatom, Russia’s state nuclear corporation, which has been given a broad mandate by the Kremlin to boost Moscow’s dominance over the Arctic – a region that is becoming more accessible due to climate change.

The corporation has set out to accomplish that in various ways. First, it has sought a massive build out of its nuclear icebreaker fleet, mounting a multi-billion dollar effort to launch as many as five new ice-busting vessels by the middle of this decade. It has also been tasked with revitalizing port infrastructure along the 5,600 kilometer sea corridor, which stretches from Novaya Zemlya to the Bering Strait. Much of the bureaucracy that issues permissions to shippers to sail through the Northern Sea Route – and collect tolls for icebreaker escorts – has also been put under Rosatom’s command.

And just this week, Russian media reported that Rosatom will spend several billion more dollars to develop its own fleet of container ships – a move meant to siphon cargo shipments away from the Malacca-Suez-Gibralter route, on which most traffic between Europe and Asia currently flows. 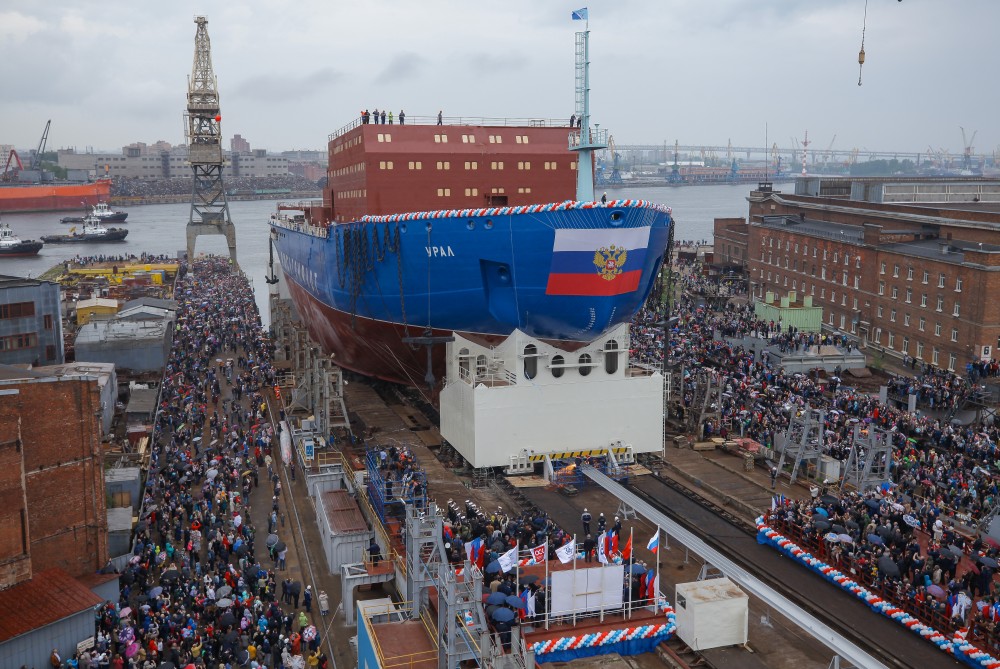 The launch of the Ural nuclear icebreaker in St Petersburg Credit: Baltic Shipyard

Absent from much of this planning are concerns about the Arctic’s fragile environment. According to NASA, the Arctic’s ice cover has shrunk by some 12.8 percent per year each year since 1979. Last year’s ice cover was 42 percent lower than 1980’s figures. This means that the arctic is absorbing more solar radiation, causing polar temperatures to rise twice as fast as anywhere else on earth. More ships passing through the region means more soot collecting on what ice is left, making it yet more vulnerable to solar radiation. A hotter Arctic also means a more erratic jet stream, which drives more catastrophic weather throughout the rest of the world.

Some of the world’s largest container shipping companies, like Hapag-Lloyd and CMA CGM ­– joined by many huge importers and exporters like Nike and H&M – have pledged to avoid sending cargo through Northern Sea Route over just these environmental concerns.

But Rosatom has said it could drive up shipping figures through the Arctic to 92 million tons a year by 2024, well beyond Putin’s decreed goal.

At a time when the UN has warned that the world has no hope of avoiding the worst climate change has to offer unless its economies rapidly decarbonize, Russia’s new Arctic traffic is made up almost wholly of hydrocarbons.

And it plans to continue. According to reporting from the Barents Observer, Rosatom’s projected cargo figures for 2024 include 17.5 tons of oil, 23 million tons of coal and 41 million tons of liquefied natural gas. The UN meanwhile said Tuesday that the world is on pace for a temperature rise of nearly 4 degrees Celsius by the end of this century.

Beyond that point, the UN reported, flooding will inundate most of the world’s coastal cities – where about 40 percent of the planet’s population lives. Severe heat, already intense in some countries, could become unbearable. Coral reefs, already dying in some places, would probably dissolve in increasingly acidic oceans.