Published on November 1, 2019 by Bellona 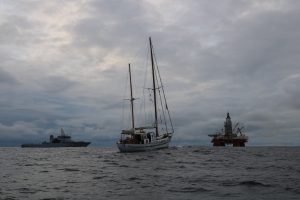 Bellona’s ship, Kallinika, is now located in the area around the drilling rig West Hercules at Toutatis. – We’re met with a horrific sight, with the drilling rig at the one side and the ridges of Lofoten at the other, says Bellonas founder and CEO Frederic Hauge.

The drilling rig is located 83 km south of Røst in the Lofoten Archipelago. Bellona’s ship is being followed by the coast guard and is ordered to stay outside the 500-meter security zone.
On the venture out towards the rig Bellona observed the heavy presence of puffins in the area, which are on the IUCN Red List.

– The fact that a country like Norway, that has over €1 trillion in its oil fund, is willing to risk its enormous nature and fishing resources in this area is incomprehensible. A line needs to be drawn – and the Norwegian government has crossed it, says Frederic Hauge.

Bellona has tried to stop this drilling project since April because of the vulnerable eco-system in Lofoten. The organization will continue the fight on several fronts to stop the petroleum activities, which threaten the area.

– We promise everyone who cares about the vulnerable nature in this area, to do everything within our power to secure the area around Lofoten and its vulnerable ecosystem, says Frederic Hauge. 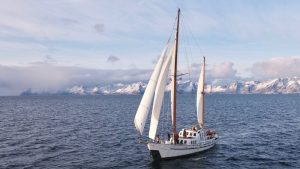