Russian President Vladimir Putin, like his counterpart in the US White House, doesn’t believe climate change is man-made, and has Trumpian alternative facts and conversations with interesting friends to back him up.

Published on April 3, 2017 by Charles Digges 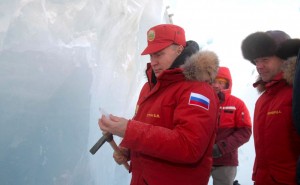 Putin on a visit to Franz Josef Land in advance of the Arctic conference. (Photo: Kremlin.ru)

Russian President Vladimir Putin, like his counterpart in the US White House, doesn’t believe climate change is man-made, and has Trumpian alternative facts and conversations with interesting friends to back him up.

Last week, as the headline speaker at a major conference in Arkhangelsk called The Arctic: Territory of Dialogue, Putin said humanity was not to blame for warming global temperatures, and that melting ice in the Arctic could mean good things for Russia’s economic development.

How does he know? He had the evidence of an Austrian explorer with a “photographic memory” who said melting glaciers and ice cover had started almost 90 years ago.

Putin didn’t name the explorer, but said he had visited the Franz Josef Land archipelago in 1930, where Putin himself had been the day before his remarks.

Twenty years after that, the explorer was shown photographs of another expedition taken of the area by “the future King of Italy” and, according to Putin, the explorer concluded there were fewer icebergs than when he had been there.

“That’s when there were no such anthropological factors, such emissions, and the warming had already started,” said Putin. Based on this flimsy account, Putin said there was nothing to be done about climate change, and that it was all bound up with something well beyond humanity’s control anyway.

“The issue is not stopping it, because that’s impossible since it could be tied to some global cycles on Earth or even of planetary significance,” Putin said. 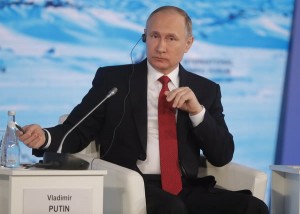 But it doesn’t have to be all bad.

Putin hasn’t called climate change a “hoax” perpetrated by the Chinese, like Donald Trump famously has, but the two men are fond of signaling major policy changes that fly in the face of evidence, science and common sense by citing the advice of vague friends and acquaintances.

Trump, for instance, has a “very famous” German golfing buddy who can prove that he won his squeaker election by many millions more votes than he actually did. Likewise, Trump’s “very, very substantial” Francophile friend “John” told him that Paris has turned into a rat’s nest of refugee terrorists, and cited that to justify a US immigration ban. No one has yet been able to figure out if John is real.

But that’s beside the point. Putin and Trump’s friends – real or imagined – are drawing them together, and these friends are apparently urging them following each other’s cues on environmental policy.

Putin’s shift on climate change – which he told the United Nations Climate Change Conference in Paris in 2015 “has become one of the most serious challenges facing humanity” – came with a big wink to the Trump administration.

Two days later, Trump’s press spokesman Sean Spicer signaled the administration would decide whether America would pull out of Paris – as Trump threatened to do on the campaign trail – by next month.

From the Arctic conference, Putin praised Pruitt, telling CNBC that people like the EPA administrator “who are not in agreement with opponents may not be at all silly.”

While Putin reaffirmed Russia’s commitment to reaching Paris goals, he again massaged the Trump administration by demurring to comment on the White House’s seeming desire to buck the agreement.

“I would not dramatize things, and I wouldn’t use these global factors for the domestic American political struggle,” he told CNBC.

He might do well to stay silent: While US Congress the Senate, and the Federal Bureau of Investigation are probing possible Kremlin meddling undergirding Trump’s surprise presidential victory, their collusion in public to undermine the Paris Accord could hardly be more obvious.

Central to that potential backstairs relationship might be the Arctic’s vast reserves of oil. A $500 billion deal between Exxon Mobil, formerly headed by Trump’s Secretary of State Rex Tillerson, and Russia’s Rosneft oil company to drill the Arctic was put on ice when the Obama Administration imposed sanctions on Russia in 2014. Trump’s opponent Hillary Clinton, was unlikely to repeal those sanctions, but Trump has said he might.