TROMSØ, Norway – The authors of a new Bellona report told Arctic Frontiers forum in Tromsø last week that sustainable development for the Arctic region must include vigorous efforts to implement renewable energy in Russia and Norway’s most northerly regions.

Published on February 1, 2016 by Anna Kireeva, translated by Charles Digges

TROMSØ, Norway – The authors of a new Bellona report told Arctic Frontiers forum in Tromsø last week that sustainable development for the Arctic region must include vigorous efforts to implement renewable energy in Russia and Norway’s most northerly regions.

The Bellona authors also say it should include integrated aquaculture development and a focus on reducing harmful emissions from the mining industry on Russia’s Kola Peninsula.

The report, Environmental Considerations in the Arctic: Sustainable resource exploitation, was presented at the conference on Thursday.

The report’s lead author and editor, Bellona’s Sigurd Enge, said Arctic coal mining was purposely excluded from the report because it’s not sustainable and carries heavy risks for the Arctic’s fragile ecosystem. 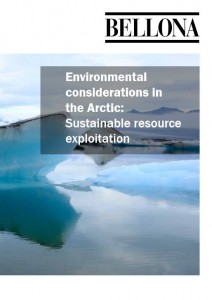 “During the writing of the report, we encountered huge complications,” said Enge, “Because of a lack of technological decisions and growing demands of the [Russian] population for food and new transport routes, its extremely difficult to define realistic decisions for the future of the Arctic that are in harmony with the environment.”

“Spitzbergen should be acknowledged as an ideal location to pilot and demonstrate new renewable technologies and climate innovations,” reads the report. “Bellona invites Norwegian authorities to explore the concept of Spitzbergen as an Arctic Renewable Energy Showroom, deploying different technologies for clean electricity production and storage.”

Based on previous reports, Bellona is confident that renewable energy use must play a leading role in the sustainable development of remote areas of Russia’s Northwesterly Murmansk Region, providing comfort, electricity, heat and a better standard of living or its residents.

The report further notes that the Kola Nuclear Power Plant plays as negative a role in renewable energy development in the region on par with the local lack of experience with renewables, poor information about renewable use in the area, and the powerful oil lobby.

A large portion of the report is devoted to the integration of aquaculture development in Arctic conditions. These come primarily from Bellona’s Ocean Forest Project, an initiative to develop aquaculture in more balanced circumstances. 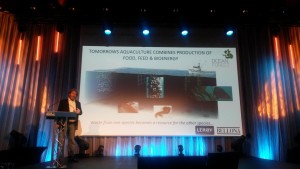 “We are now seeing in a boom in renewable energy – Norway is actively building wind parks,” said Bellona President Fredric Hauge in his address to the Arctic Frontiers forum. “Bellona has already applied to the government for permission to grow algae for energy production and to grow an ocean forest in our Arctic water bodies.”

He said that the 24-hour sunlight conditions during the summer in the Arctic would provide algae with enormous energy.

The development of biofuel, said Hauge, is somewhat contradictory. If it’s to be produced from soy, then all of Europe would need to plant and harvest soy. If biofuel is to come from ocean-grown algae, then an underwater plot only the size of Belgium is be required. Moreover, growing algae doesn’t require fresh water, pesticides or permission from farmers for land use.

Hauge also complained that oil and gas companies can more easily get drilling permits for the Arctic from the Norwegian government than Bellona can for undersea algae cultivation.

“It reminds me of when we brought the first electric car into Norway,” said Hauge. “At that time there were no regulations, special rules or anything, but we were insistent and look at what we have achieved.”

Norway by 2015 was by far the largest per capita consumer of electric cars in the world, and is pushing to make all cars on its roads electric by 2025.

“We can’t continue to think and do as we did before – we have to explore new paths of development,” said Hauge. “I’ve already been saying for a number of years that there are other alternatives to drilling oil in the Arctic.”

Hauge said that two years previous, his criticism of Arctic drilling, or what he called Norway’s “national pride,” was unpopular. But now, he said, investors are checking out new energy technologies. As few as two years ago, he said, he surmised the oil and gas industry wouldn’t survive another 15 years.

“Now we see that because of the renewable energy boom, especially in solar energy, coal companies in Germany are in decline, they are already closing,” he said. “The same will soon happen with oil and gas companies and we must be prepared for this.”

His words echoed those of Norwegian Prime Minister Erna Solberg, who said that Norway’s oceans would in the future give the country all that it needs.

“The ocean’s resources will help us deal with all the challenges we face now and in the future: the growth of demand for food and energy,” Solberg told the forum. “We must improve our knowledge to observe the balance between economic growth and the safety of the ocean environment.”