Published on August 5, 2015 by Charles Digges 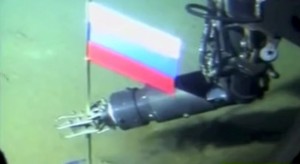 A Russian flag planted by Artur Chilingarov from a submarine undersea at the North Pole in 2007. (Photo: Still from NTV Russian State Television)

Russia on Tuesday submitted claims to the United Nation for control of staggering swathes of Arctic seabed, stretching as far north as the as the North Pole itself in a move to position lock down further gas and oil drilling, media reports said.

The move follows on October promises from Sergei Donskoi, Russia’s Minister of the environment and natural resources that Moscow was seeking recognition for its formal economic control of 1.2 million square kilometers beneath Arctic waters, RFE/RL reported.

But Sigurd Enge, Bellona’s Arctic expert, said the hydrocarbon estimates were at best a guess, and would hardly be worth pursuing because its extraction from the central Arctic would simply cost too much.

“Fuel produced from Arctic gas would be some the most expensive in the world,” he said. 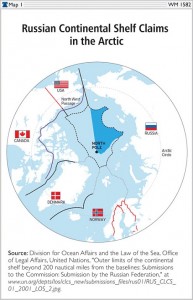 A country by country breakdown of current Arctic claims. (Source: Division of Ocean Affairs and the Law of the Sea, Office of Legal Affair, United Nations)

The area Russia lays claim to in Tuesdays’ request to the UN include the Mendeleev and Lomonosov Ridges, two major structures beneath the Arctic Ocean, said the Barents Observer.

The claim is based on Russia’s assertion that new research shows the ridges are geological extensions of the country’s continental shelf, its Foreign Ministry said in a Russian-language statement yesterday.

“To base its claim, Russia in this region used a broad range of scientific data collected over many years of Arctic exploration,” the statement said. “Submitting the claim to the commission is an important step in formulating Russia’s right to the Arctic Shelf in accordance with the United Nations convention on the Law of the Sea.”

One Russian Arctic explorer, Artur Chilingarov, has often been antic in his contributions to the argument for the territory. In 2007, at the Kremlin’s behest, he piloted a miniature submarine to the sea floor directly below the North Pole, scooped up a soil sample and planted a Russian flag made of titanium there.

Russia originally petitioned the UN for the same territory in 2002, but was rebuffed, and told it hadn’t furnished enough scientific data to support its claim.

Denmark in 2014 submitted a bid to the UN for 895,000 square kilometers of Arctic seabed, claiming the Lomonosov ridge was an extension of Greenland’s continental shelf, the Telegraph reported.

Denmark’s claim includes the North Pole itself, putting its bid in conflict with Russia’s, the Barents Observer reported.

Other Arctic boundary nations are jockeying for position as well: The United States, Norway, and Canada have all attempted to assert their jurisdiction over parts of the Arctic Ocean. Norway in 2009 was the first country to have its claims approved, said the portal.

International law to rule on claim

Russia’s new claim will now have to be adjudicated under the terms of the UN’s Convention on the Law of the Sea of 1982, which delimits continental shelf claims.

It allows countries to lay claim to exclusive economic rights on territories up to 320 kilometers from their coastline or as far as their land territory is determined to naturally extend from shore to beneath the sea.

But Enge said everyone is showing up late at the starting gate.

“There are obvious aggressive oil and gas motivations driving this process, but these Arctic nations are late to race,” he said. “The process of defining these continental shelf borders via the UN process could take as long as 15 years – nobody knows.”

Russia’s aspirations to control the arctic go back as far as Stalin’s rule, when the Kremlin claimed a huge pie-shaped section of the Arctic Ocean extending from its eastern and western borders to the North Pole.

From snowy wasteland to ice-free boomtown?

For decades no one paid attention to Russia’s claim on the desolate territory. But global warming has changed that in recent years as oil companies seek to tap new resources. 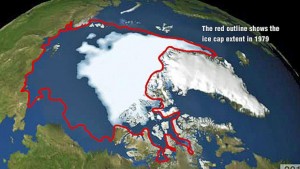 A visualization from NASA's Jet Propulsion Laboratory shows the annual Arctic sea ice minimum from 1979 to 2012. The red outline shows the 1979 coverage of this perennial ice, which has been steadily decreasing ever since. (NASA/Goddard Scientific Visualization Studio)

A recent study from the US National Oceanic and Atmospheric Administration (NOAA) predicted the Arctic ice cap would nearly completely disappear between 2020 and 2050 – far early than previous studies had concluded.

And that, said Enge, is one of the worst things that could happen to Arctic oil and gas aspirations.

The declining ice cover puts  more huge sheets of it adrift and at the mercy of high winds, waves and weather. Populating the high arctic with oil and gas platforms would essentially be peppering it with hundreds of Titanics.

“Wave patterns are changing because the ice is disappearing,” said Enge. “The waves are higher, causing rough seas and Arctic low pressure systems bring more extreme weather, hitting you like a hammer.”

And even projects that have long been on the drawing board aren’t getting anywhere, said Enge.

“The Shtokman oil and gas field was discovered about two decades ago and no development has occurred – it’s too challenging,” said Enge.

Russia’s Prirazlomnaya platform in the Kara Sea managed to quirt out 70,000 of substandard ARCO type crude in April 2014, to great fanfare that has since been forgotten. Royal Dutch Shell has said it will drill the Chuchki Sea near Alaska before summer’s end for the fourth year in a row.

“I mean, come on,” Enge said. “They have been trying this for some time and the conditions aren’t getting any easier.”

But Russia for the moment seems to continue its push for Arctic dominance.

President Vladimir Putin has declared the Arctic an area of “special interest.” He has also bolstered naval presence there to such an extent that he’s spent more money building new nuclear submarines than was cooperatively spent by the US and Russia to dismantle Russia’s ballistic missile submarines after the fall of the Soviet Union.

And in April, Dmitry Rogozin, deputy prime minister in charge of defense and head of a new Arctic commission, reddened faces at Norway’s foreign ministry by traveling without a visa to the country’s Svalbard Archipelago, defying a travel ban issued against him by the European Union and Norway over Russia’s annexation of Crimea in March 2014.

From there, Rogozin travelled to the North Pole, from where he likened Russia’s intentions for Arctic conquest to Moscow’s  annexation of Crimea.