MURMANSK – One of Russia’s fundamental national priorities is developing hydrocarbon resources in the Arctic zone, but the lack of infrastructure, technological backwardness, incompetence in handling oil spills in icy conditions and even sanctions imposed on Moscow by the west are not as threatening to these federal initiative as are the falling price of oil.

Published on December 8, 2014 by Anna Kireeva 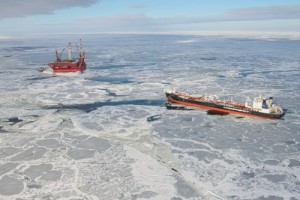 MURMANSK – One of Russia’s fundamental national priorities is developing hydrocarbon resources in the Arctic zone, but the lack of infrastructure, technological backwardness, incompetence in handling oil spills in icy conditions and even sanctions imposed on Moscow by the west are not as threatening to these federal initiative as are the falling price of oil.

Russian oil industry experts also say that these combined factors – even falling prices – are not as catastrophic as they would appear, and that oil will inevitably be produced on Arctic lands and seas.

Mikhail Grigoriev predicted this would be possible in the next 15 years. Grigoriev is a member of the scientific council of Russia’s security council, an academic with the Russian Academy of Natural Sciences and director of the Gecon, a geological and mineral recovery and consultation firm. Mikhail Grigoriev is a member of the scientific council of Russia’s security council, an academic with the Russian Academy of Natural Sciences and director of the Gecon. (Photo: Murmanshelf)

He told the conference that based on deep earth use license agreements and approved field development projects, it’s a near certainty that the production of hydrocarbons by 2030 should be expected in three of the ten zones of economic activity on the Arctic shelf and coast, as well as in those that are already currently producing.

Grigoriev was speaking of the Timano-Pechora province along the north of the Western Siberian coast between the Ob and Yenesei Rivers, and about the Pechora sea’s continental shelf, to where three oil tankers carrying oil from the Prirazlomnaya field have been dispatched. Development of this area’s several fields has been long been on the drawing board.

“It’s interesting that the most favorable are in terms of climactic conditions is the central part of the Barents Sea, which, under the terms of licensing agreements, will be involved in development after 2030,” said Grigoriev.

The oil industry sums up its year

According to Chilingarov, a new step in Arctic development was oil state oil giant Rosneft’s drilling of the “University 1” test well in the Kara Sea, which opened a light crude field called Pobeda, or Victory.

Chilingarov said the work was done in full compliance with the highest contemporary and international ecological standards. An unprecedented system of ice monitoring was employed, including the use of a number of specialized vessels.

“The project involved eight foreign companies. To our regret, this cooperation is now interrupted by the imposition of sanctions. I am convinced that by stopping this important project, both sides will suffer,” said Chilingarov.

While speaking about the development Dolginskoye oil field, located in the central part of the Pechora Sea, Alexey Fadeyev, the head production officer on the project for Gazpromneft-Sakhalin said that the company faced a number of difficulties.

Mainly, Gazpromneft, the oil subsidiary of Russian natural gas giant Gazprom is combatting severe climatic conditions, such as ice and serious sea disturbances that occur in autumn, the barely developed infrastructure, and a lack of competition among contractors and suppliers. “The field itself has a complex geological structure,” said Fadeyev. “ It extends a length of 90 kilometers. The depth in the field area is 35 to 50 meters. The first oil shipment is scheduled for the beginning of the 2020s. Its distance from coastal supporting infrastructure is about 1000 km, and the base resources are in the Murmansk fishing port.”

The first well in the Dolginskoye field was drilled and opened in 1998. The field is located 120 kilometers south of the Novaya Zemlya Archipelago and 110 kilometers north of mainland Russia. To date, its recoverable oil reserves are estimated at over 200 million tons.

“Not all Russian oil and gas deposits on the Arctic shelf are commercially successful – if you use the Norwegian classification, they are’ partially open,’” said Grigoriev.

Experts believe that the main recovery up to 2030 will focus on the Arctic’s land-based fields like the Timan-Pechora and Western Siberia field. Shelf work is only anticipated for the Pechora Sea. The development of these deposits suggests there will be marine transportation of these hydrocarbons.

Yet, for all this, Grigoriev made an announcement that was unlikely to please his bosses.

“If we summarize those projects that are currently on the Arctic shelf and coast, it turns out that by 2030, the shelf will produce no more than 3 percent of the oil in the country as a whole [or 15 million of 500 million tons),” said Grigoriev. “There will be no gas produced from shelf resources. So, there’s no need to overestimate the prospects of developing the Arctic shelf, ” Grigoriev said. Grigoriev said Arctic gas and oil development constitutes two separate projects: those implemented on land and those implemented on the shelf, in regions distant from existing or planned pipelines. Further plans to take out what’s produced – as well as the delivery of construction materials and other things necessary for infrastructure development – are either being implemented or are planned to be via sea.

That is, what we are dealing with on these northern fields is the typically Russian oil and gas industry method of transportation by sea, which is becoming a distinguishing feature of development. But Russia has unique international scale experience with Arctic sea navigation, and experience using the Varandey terminal. Nowhere in the world is there any experience relative to creating liquefied natural gas (LNG) in such climactic conditions as exist in Yamal, even at the Norwegian test plant of Melkøya, which is located in less severe climactic conditions. And even Melkøya failed to reach full capacity within scheduled deadlines.

“The whole Norwegian oil business is linked with the shelf, development of which began on the North Sea,” Grigoriev told Bellona in a side interview. “Distribution of projects on the Norwegian and later on the Barents Sea, is associated with despair because the potential of the North and Norwegian Seas is exhausted.”

Despite all the technological solutions, said Grigoriev, “production will fall.”

“In Russia, the situation is different, in the Arctic – not just the shelf.” Grigoriev continued. “This is a huge area where there is are serious oil and gas deposits on land. This, first of all, concerns the fields in the Nenets and Yamal-Nenets autonomous regions ” Grigoriev told Bellona.”

Grigoriev said that the biggest threat to Arctic shelf projects aren’t even the sanctions affecting the Prirazlomnaya field, and the shelf projects Rosneft and Gazpromneft are trying to get rolling in the Pechora Sea. The threat, rather, is falling oil prices.

“What’s most terrifying for Russia’s Arctic projects? Yes, there are limits to western technology available, limits on cooperation on lengthy, cheap credits, but this, in principle, can be furnished by other markets,” said Grigoriev. “The general threat for the Arctic is the worldwide decrease in oil prices.”

Brent crude benchmark prices fell below the $80 per barrel mark at the same time that Russian Arctic projects like Prirazlomnaya were orienting themselves toward a $100 per barrel price. This is especially noteworthy when compared to Norway’s Goliat field in the Norwegian sector of the Barents Sea, whose economic feasibility dries up when oil hits $95 dollars a barrel.

Despite this, Grigoriev doesn’t rule out a “bright Arctic future,” especially when taking into consideration 1998, when oil plummeted to $13 per barrel – without destroying the industry.

“Prices and sanctions are apparently moving back deadlines for Arctic shelf fields going into development,” said Grigoriev. “However, if oil remains a fundamental energy source, a price rise will provide acceptable returns on field development, environmentally friendly technologies and will be implemented for development, and then open and future oil fields will serve as a new source of raw material for the world market – and not just the Russian shelf, but the Norwegian, American and Canadian ones as well.”