In a week when the UN’s International Panel on Climate Change is supposed to unveil its much anticipated fifth assessment report – which is not expected to bear good news – the Danish-owned vessel Nordic Orion set sail to become the second cargo ship ever to use the storied Northwest Passage as a trade route.

Published on September 25, 2013 by Magnus Borgen 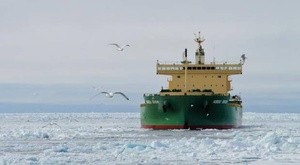 The last journey taken by a commercian freighter through the inhospitable, ice strewn minefield was in 1969 – and not without reason.

“The journey for the [Nordic Orion] poses an enormous risk to the environment and set a highly detrimental predicent,” said Sigurd Enge, Bellona’s senior advisor on Arctic affairs.

Meanwhile, a leaked draft of the IPCC’s Fifth Assessment Report (AR5) that will is expected to be presented in Stockholm on Friday, promises to offer the most definitive statement from the panel yet that climate change is man-made.

It also says that global warming is starting to affect extreme weather events, such as flooding, drought, heat waves and wildfires. It additionally warns of a potential rise in sea levels that, by century’s end, would drown many coastal cities in their current state of preparedness – problems tied directly to pollution of the Arctic.

The Nordic Orion is en route from Vancouver, Canada to Pori, Finland and, by using the Northwest Passage, its owners claim they will shave 1000 nautical miles off the vessel’s journey.

Media reports indicate that the ship has now exited the Northwest Passage, but Bellona’s reaction to the vessel’s route is strongly negative.

“These waters are highly risky to operate in,” said Enge. “If such a ship wrecks in these waters , we have neither equipment nor emergency infrastructe to clean up or conduct rescue operations.”

As reported by Toronto’s daily newpaper, The Globe and Mail, Canda’s rescue infractructure is notoriously undereequpped.

“Canada’s Arctic search-and-rescue capabilities are desperately poor,” the paper said. [Canada’s] long-range helicopters are based in British Columbia, Nova Scotia and Labrador: Each aircraft would take more than a day to fly the 2,500 kilometers to the Northwest Passage, stopping to refuel along the way.”

Enge confirmed the remarks saying, “The Northwest Passage is even more remote in terms of preparedness than are the Russians.”

Russia’s Northern Sea Route has 16 deepwater ports, where the Northwest Passage has none, he said.

Navigation in the Northwest passage is also next to impossible, John Falkingham, an expert with the Canadian Ice Service, told the Nunatsiaq News, based in Canada’s Northernmost Nunavut territory, in an interview last month.

Falkingham told the paper that inadequate charts are the “single biggest issue in the Arctic,” saying only one-tenth of Canada’s Arctic waters are charted to modern standards.

Accidents can – and have – happened

The Globe and Mail also noted there were major concerns about the seaworthiness of the Nordic Orion in the ice conditions of the Northwest Passage.

“Although the Nordic Orion is ice-strengthened, Arctic storms, shallow waters and icebergs still pose risks. Small chunks of icebergs called “growlers” are extremely hard, float low in the water, and are difficult to spot,” reported the paper, and went on to detail a recent shipwreck caused by such low floating icebergs.

“In 2007, the ice-strengthened MS Explorer sank during an Antarctic voyage after striking a growler,” said the paper. It also added that ice coagulation on the top portion of vessels sailing Arctic waters could upend them.

“Then there is “icing,” which occurs when ocean spray freezes onto the superstructure of a ship, causing it to become top-heavy and capsize,” said the paper.

Enge added that predicting ice conditions in the Northwest passage is all but impossible, where the Northern Sea Route offers at least some foresight.

“The fact that the Northwest Passage is replete with Islands, fjords and straits makes it impossible to have any forehand knowledge of the quickly-shifting ice conditions,” he said. “Along the Northern Sea Route you have a lot of clear water, so ice conditions are easier to predict.”

Bronx cheer for the Candian government

Enge says the news of the Nordic Orion shows that Canadian authorities are taking a page from Russia’s book on irresponsible management of Arctic waters and rewritting it to be even worse.

“Canada’s international reputation as a responsible Arctic nation is at stake,” he said. “Even more regretable is the fact that Canada’s current chairmanship of the Arctic Council (the group uniting all nations with an Arctic border) provides a bad example for other Arctic countries on how to safely manage ice and environmental conditions.”

While some have argued that shorter ship voyages at sea along routes like the Northwest Passage and the Northern Sea Route along Siberia’s northern coast produce an overall reduction in the carbon footprint from shipping, Enge flatly opposes that view.

“Emissions of soot from heavy oil [that powers ship] in the Arctic climate eliminates the benefits of choosing a shorter route,” Enge said. “Problems of soot in Arctic waters have a proven effect on the accelerated melting [the Polar Icecap]. Chosing shorter routes is therefore solely for profit at the expense of the environment and the climate. This form of risk transfer is the last thing the Arctic needs now.”

73,000 tons of metallurgical coal on the short route

The Nordic Orion was hauling 73,000 tons of metallurgical coal, used as an additive in manufacturing steel. The ship, because it was able to avoid the Panama Canal, was able to load 13,000 more tons of the cargo. Ruuki Metals of Finland is awaiting the delivery.

The Nordic Orion is a single hull ice class vessel certified to sail in icy waters. Its runs on heavy feul oil stored in bunker tanks in the hull, with only hull plates as a barrier to between the fuel and water outside.

The boat has a single hull with ice class , and is thus certified to go in icy waters. The ship runs on heavy fuel oil stored in the bunker tanks in the hull with only hull plates as a barrier between the oil and water outside.

With this voyage, the Nordic Orion is writing itself into the history books with a dirty pen. “The [ship’s owners] first considered trying to navigate the Northeast Passage, but finnaly chose the Northwest Passage,” said Enge who has followed the Nordic Orion’s possible itineraries.

The Nordic Orion is not the first cargo vessel that has attempted to ford the Northwest Passage. The oil tanker SS Manhattan conducted a test voyage in 1969 through the ice minefield to test the feasibilit of delivering oil between Prudhoe Bay, Alaska and the US East Coast.

Retrofitted with an icebreaking bow for the journey, the vessel traversed the Northwest Passage with several changes of course for unforseen ice conditions. In Prudhoe Bay, it loaded one single symbolic barrel of crude and returned to the US East Coast under the escort of a Canadian coastguard icebreakers.

As a result of the journey’s difficulties, big oil reasoned that it would be easier to transport oil from Prudhoe Bay to Valdez via the Trans-Alaskan Pipeline.

Follow the journey of the Nordic Orion on Marinetraffic.com.