In a climate policy seminar on 26 June, Bellona Europa chairman Paal Frisvold challenged both Norwegian Minister for Environment and the EU Commissioner for Climate Action, Connie Hedegaard, on their climate ambitions. He urged the Norwegian Minister provide clarity beyond 2020 on Norway’s climate policy ambitions and Hedegaard to implement measures additional to the Emissions Trading System (ETS) to drive the necessary transition to a low-carbon economy. 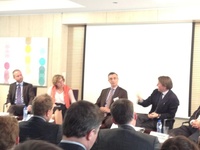 The seminar, entitled Preparing for the Future: Stepping up the Ambitions of Climate Change Policy and jointly organised by the Mission of Norway to the EU and the Centre for European Policy Studies (CEPS), attracted a large audience with its timely topic.

The need for long-term planning and predictability

Presenting the Norwegian climate white paper, launched in May this year, Solhjell emphasised the importance of cross-party agreements to allow for stability and long-term planning in climate policy. Even recognising this, the government’s plan fails to go beyond 2020 – an issue which Bellona has criticised the report for earlier. Responding to Paal Frisvold, who was one of the panellists in the discussion, Solhjell claimed that talking about 2050 goals is easy and that what is required instead are concrete plans until 2025 and 2030.

“2050 is only one investment cycle away and if we don’t provide investors and decision makers with the right policies and goals today, we will be locked in to a CO2-intensive economy for generations,” Frisvold replied.

He received support from the industry representatives in the room. “We urgently need credible, long-term stability on the CO2 market,” the Senior Vice President European Affairs at Alstom stated. Hedegaard urged the private sector to repeat their desire for a high, predictable CO2 price not only during international summits but throughout the year to put pressure on governments.

Hedegaard, who like Solhjell had just returned from Rio+20 with mixed emotions, argued for global agreements and continued international and European cooperation. “As frustrating and as slow as it can be, it is the only global forum we have to agree on these issues,” she stated in support of the UNFCCC meetings held every year. She, too, stressed the importance of long-term planning and gave a less than subtle hint to Norway to plan further than 2020 in their national climate policies.

Advocating for a strengthened ETS, she argued it had already achieved its primary objective of reducing CO2 emissions in Europe. “The last years have seen economic growth coupled with reduced emissions in the ETS sector, and as a proof of its success, systems based on the ETS have been or are established in Australia, China, Korea and California,” she stated.

While showing some support for the increased CO2 price for Norway offshore activities, one of the outcomes of the climate white paper, she argued strongly for an improved ETS and an increased CO2 price to avoid 27 different support systems. To achieve that, the Commission has been undertaking a review of the ETS, which will result in a report about the CO2 market before the summer.

The moderator of the discussion, BBC’s Shirin Wheeler, questioned Norway talking about climate policies while simultaneously accelerating oil and gas exploration in the High North. “There are conflicts of interest everywhere,” Solhjell responded.