The election day of last December 19 brought Belarus’s incumbent president Alexander Lukashenko a highly contested victory, giving him a fourth term in office and resulting in a brutal crackdown on a 50,000-strong peaceful demonstration, beatings and arrests of hundreds of people – including international observers and journalists – and continuing persecution of civil activists. Bellona takes a look at what avenues of action are now available to Belarusian NGOs and how they plan to turn around the bleak survival prospects they are facing.

Published on January 7, 2011 by Bellona, translated by Maria Kaminskaya 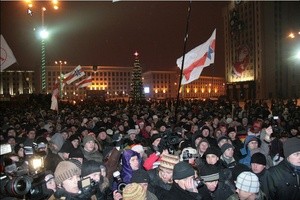 The announcement of Lukashenko’s victory by the country’s Central Election Commission – Lukashenko secured 79.6 percent of the general vote, winning what many observers consider to have been a rigged election – sparked a wave of bitter protests, with thousands gathering in the centre of the Belarusian capital, Minsk, late night on December 19, to rally against alleged voting fraud. The police brutally dispersed the crowds, with beatings and numerous arrests – including of international journalists – reported by the  media. Seven of the nine presidential candidates who had challenged Lukashenko were arrested as well, with top opposition leader Vladimir Neklyaev forcibly removed from the hospital where he was being treated and remaining in detention to this day.

Searches and confiscations have become daily occurrences in the offices of independent Belarusian media and human rights organisations ever since Lukashenko retained his position in office. Computer equipment and data carriers are being seized by the police. The country’s non-profit organisations – including environmental NGOs – are finding themselves operating in very different circumstances than they were before the election. It is as if the election gave the government and its law enforcement agencies a clear signal to launch a war on the Belarusian civil society’s most active representatives – human rights advocates and journalists.

According to the Belarusian news website Naviny.By, in the ten days following the election, officers of the Belarusian secret police, the KGB, conducted searches and seized computer equipment in the offices of several independent newspapers and TV channels, including those that remained politically neutral to the election campaign. Additional searches were conducted in the flats of employees and correspondents working for these organisations. Repressive actions were also taken against bloggers and web-based observers who had not taken part in the vote or in the protests in central Minsk. Similarly, says Naviny.By, independent human rights activists found themselves under fire: Alexander Kaputsky, from the Belarusian Helsinki Committee, and Yelena Tonkacheva, of the Educational Institution “Centre for Legal Transformation,” among many others.

Oleg Gulak, who heads the Belarusian Helsinki Committee, referred to the massive opposition crackdown in Minsk as a “psychosis on the part of the law enforcement,” according to a December 25 report by Naviny.By.

The same report quotes the Belarusian screenplay writer Vladimir Khalip as saying: “After the [events in the capital] on December 19, the authorities are doing a sweep of the Belarusian civil society, to get it to sit quietly like a mouse in the corner and not make a peep. They will use various methods of deterrence against the activists of the democratic movement: detentions, arrests, intimidation, and attempts to break people physically, morally, and psychologically. The authorities’ aim is to make sure that only decorative – not real, democratic – public organisations remain in the country.”

The Long-term International Observation Mission Committee of the International Control for the human rights situation in Belarus, which was established on December 27 and unites representatives of human rights initiatives from member countries of the Organization for Security and Co-operation in Europe (OSCE), as well as international civil networks, spoke in a statement of a “fact of pressure brought on human rights activists and impediments to their lawful activities in human rights advocacy.”

The situation that the third sector has found itself in after the latest presidential election is not, to be sure, a dramatically new one. The very principle that a non-profit or non-governmental organisation can only get officially registered in Belarus if it obtains the necessary permission – rather than simply informing the authorities of intent to pursue such and such activities – has long been supported by relevant legislation, much as criminal prosecution for performing such activities on behalf of an unregistered organisation.

As long back as ten years ago, Belarus adopted a decree entitled “On certain measures of improving the procedure for accepting and availing of non-repayable foreign aid,” which tightened state control over the activities performed by – and sources of finance available to – non-governmental organisations and added some new instruments to the arsenal of tools the authorities use to neutralise the forces of civil society.

But tightening further the screws where no more leeway is left to begin with can ultimately damage the big repression machine that Lukashenko’s government has been building during the sixteen years the Belarusian president has been in power: Something is bound to give.

Just what will happen to NGOs when this colossus crumbles is itself a very good question.

According to Vlada Velichko, speaker of the Eastern Partnership Civil Society Forum, in these “new old” conditions, there are still “organisations operating as part of the civil society, they are pursuing their interests, and those interests haven’t gone anywhere.”

“With this current political situation in mind, we will be working to make sure that these interests be taken into account,” Velichko told Bellona. “The authorities were not used to listening to or accepting our position.”

Despite the increasing pressure on civil society in Belarus, Yurov from the Observation Mission Committee believes the authorities have no other choice but to start, eventually, some sort of a dialogue with NGOs.

“I think that precisely because it is in the centre of Europe, it is very important for the Republic of Belarus to preserve the status of a state that is not in isolation from the international community. A state with ties both with the East and the West,” Yurov told Bellona. “We strongly hope that the Belarusian authorities understand this well and that they realise that cooperation with international human rights organisations – much as a general stabilisation of the situation with human rights – is the country’s only chance for survival, economically and politically.”

While special services are busy sweeping across the offices and flats of those deemed “untrustworthy” by the state and rounding up activists and dissidents, the Belarusian Ministry of Justice is taking measures of its own: Pushing hurriedly – and with as little public interference as possible – to adopt a new bill on non-profit organisations.

The draft law “On non-profit organisations” was to be put together before 2010 was out and presented for the consideration of parliament members in March 2011.

The Centre for Legal Transformation’s director Olga Smolyanko told Bellona that already last spring the draft law caught the eye of the Assembly of Non-Governmental Organisations of Belarus, which reminded the bill’s authors of the need to involve the public in its further development and of the importance of a public discussion of its provisions.

“Unfortunately, this has not been done. The Ministry of Justice ignored our request to include our organisation into the working group charged with developing the bill. No independent experts were invited to participate in any direct discussion of the concept of the new law,” Smolyanko said.

Last December 23, the justice ministry held a round table scheduled to discuss the bill – but did so without presenting the actual text of the bill to the participants, who were forty or so representatives of various non-profit organisations cherry-picked by the ministry. All other  NGOs who requested permission to attend but did not pass the ministry’s scrutiny were denied access on the grounds of “limited seating capacity.”

According to Sergei Drozdovsky, chairman of the Non-Governmental Organisation “The Republican Association of Wheelchair Persons,” who took part in the discussion, those present were representatives of organisations that earlier expressed their approval of the same provisions in the future law that caused criticism on the part of more independent organisations. Specifically, that concerned the stipulation to obtain state registration for all non-governmental organisations without exception – including those that for the time being are exempt from this procedure. Elsewhere, the draft law also provides for more stringent control by government authorities over the country’s NGOs. These “problem” passages have, furthermore, been proposed in contradiction with the Belarusian Constitution.

But some of the earlier criticism was in fact voiced again during the justice ministry’s round table discussion, which caused this reaction, as relayed by Drozdovsky, from deputy justice minister Igor Tushinsky: “Stop equating commerce with the public sphere where the declarative principle is concerned!”

Tushinsky referred to the principle by which an organisation or a business need only declare its intent to pursue certain activities to obtain registration – something that is not in force with regard to NGOs.

“There, we have liberalisation, and here, the state’s desire for development, which is why the opinion of the Ministry of Justice is registration upon permission – and that’s it!s As far as control goes – it goes without saying that we need it!” Tushinsky added, according to Drozdovsky’s account.

Drozdovsky said a similar utterance came from Viktor Guminsky, deputy chairman of the Chamber of Representatives of the National Assembly of the Republic of Belarus: “We shouldn’t forget about destructive NGOs, either, so we cannot allow the declarative principle here.”

According to Tushinsky, the “destructive” NGOs in question was a reference to religious sects and other organisations with similar activities, Drozdovsky said.

The third sector circling the wagons

Some thirty Belarusian environmental, educational, and human-rights NGOs chose to state their civil position loud and clear in the suffocating post-December-19 environment. Among them were a number of Belarusian environmental organisations – including those that have been especially active on the ecological front in the past several years, such as Ecodom (Ecohome) and Zelyonaya Set (The Green Network). On December 24, they signed a collective statement written by the National Platform of the Eastern Partnership Civil Society Forum, condemning the government’s actions of the night of December 19 and demanding that the authorities release all presidential candidates and their supporters detained that night and stop the political repressions against Belarusian citizens.

On December 27, the Centre for Legal Transformation and the Assembly of Non-Governmental Organisations of Belarus held an alternative round table of their own to discuss the new NGO bill.

Observers note that in the roughly two weeks that passed since the election, the Belarusian third sector could be seen consolidating their forces in response to the growing intimidation by the state, by providing what help and support they have been able to give to those who were detained or endured other injustices during the December 19 demonstrations.

This is certainly a plus if one is aiming to discern an optimistic scenario in the situation at hand: If anyone, environmentalists have both experience making swift decisions in changeable or threatening circumstances and support of their fellow, more politically-oriented NGOs, ready to give a shoulder to lean on when the going gets tough. But in a worse-case scenario – one that is currently more likely for the months ahead – this means that more and more environmentalists are facing a risk of getting flagged as “undesirables,” just as those whose interests and activities lie outside the scope of ecology.

That, however, will hardly change the current state of affairs: The line between the servile and the “disloyal” has been clearly drawn in Belarus. Just how the “new old” government is going to re-engage in a dialogue with those from the clearly opposing camp – organisations which, like Ecodom, actually managed, prior to this election, to bring about some positive results via efforts to maintain a constructive interaction with the Belarusian state – is a question nobody in Belarus has an answer for.