Free energy for all, says Kennedy at CC9

SARPSBORG, Norway – Robert F. Kenney, Jr. riveted the crowd at the CC9 when he spoke about the United States’ revolutionary new energy development plan for the new buzz phrase for electricity transmission – the smart grid – which will allow for the replacement of aged lines to carry power from alternative and renewable energy sources.

Published on June 4, 2009 by Annicken Vargel, translated by Charles Digges

Kennedy – nephew of former American President John F. Kennedy and an environmental lawyer with the US National Resources Defence Council – said that President Barack Obama’s plan is to built up and modernise the aged US electrical grid, and that this alone will lead to a dramatic emissions reductions.

“We spend $700 million a year shopping for oil, for the most part from countries that don’t share our values,1" said Kennedy, who is also president of the Waterkeeper Alliance.

New electricity network
To meet the rising need for electricity in the United States over the next 30 years, 500 new coal-fired plants must be built. With a new electricity grid – the so called “smart grid touted by the Obama administration – the country can instead concentrates on solar and wind energy.

“North Dakota has enough wind to supply us with energy, but they don’t have the possibility to couple themselves up to the national electricity grid to export it,” he said.

Wind energy in North Dakota
North Dakota, a northern plains state,  has a strong desire to produce wind energy, but the opportunities exploit the potential are small.

“They have so much wind they could supply the entire US even if every household has an electric car. We want to create a national energy market that rewards energy efficiency and fines ineffectiveness so that those who produce an overabundance can sell it themselves on the network,” said Kennedy.

Obama will turn the crisis around 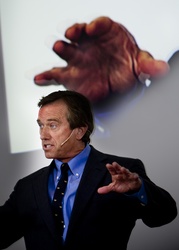 “Every day business leaders wake up and think about their loyalty to the stockholders and to the world. But President Obama’s plan is to turn this crisis into something that is fantastic for all of America,” Kennedy said.

“His plan is to give work to all by building up a new infrastructure for new energy,” said Kennedy and drew a parallel between Obama and former President Franklin D. Roosevelt, whose government funded New Deal pulled the United States out of the Great Depression.

“(Roosevelt) also put everyone to work making airplanes, tanks ships and bombers that we sent to Germany and France and luckily never saw again. But we will establish an infrastructure for solar farms and windmills so we will subsequently have free energy for all,” said Kennedy.

Kennedy holds directorial positions in many businesses, and spoke about how one of the businesses he represents can build solar farms for a fifth of the cost of a traditional plant.

“Now that the economic incentives are in place, it will happen,” said Kennedy.

A long environmental career
Kenney has worked with environmental policy and environmental rights for 25 years, but his interest in the environment came earlier. He had an 8-year-long correspondence with his uncle John F. Kennedy when his uncle was president. Kennedy the younger was invited to the Oval Office and was then sent around to various secretaries and departments. His goal was to write a book about preserving the environment.

“Our biggest challenge today is global warming, and the way we use energy is destroying the planet, taking people’s lives and is destroying things for coming generations,” said Kennedy.

1 Translator’s note: As of the translation of this piece, Kennedy’s exact remarks were not available in English. They have thus been translated from Norwegian, and may not be Kennedy’s exact quotations in his native language.