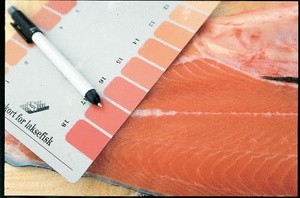 Most regard salmonids as a "red" fish. The flesh from wild salmon from oceans and rivers is often red, pink or orange, in varying degrees. The red colour is caused by carotenoids from the diet of the fish. The word carotenoid stems from carrot, Daucus carota, which also gave the name to the first carotenoid that was isolated, carotene. Today, scientists know of more than 600 different natural carotenoids. Carotenoids are very widespread in nature and are found in most living organisms, from small microorganisms to higher plants and animals. The dye is only produced in certain types of microorganisms, algae, fungus and plants. Other organisms such as salmon must ingest carotenoids through food.

In salmon, the most common carotenoid is astaxanthin. Astaxanthin is very common in both freshwater organisms and marine organisms, and is released when crayfish and lobster are cooked, which is why they turn red and look attractive on the dinner plate. Other carotenoids common in fish are canthaxanthin and lutein. Wild salmon take in carotenoids by eating small crustaceans or other fish with small crustaceans in their digestive system. Analyses have shown that wild Atlantic salmon have between 3 and 11 mg astaxanthin per kilogram in muscle. In American Sockeye salmon (Onchorhynchus nerka) the natural level is higher, from 25 to 37 mg/kg in muscle.

The function of carotenoids
Carotenoids in the diet of wild fish have several functions. In a number of fish species the red colour is important as camouflage, because it makes the fish less visible in deep water, where the red segment of the wavelength spectrum of visible light does not penetrate. In salmonids the red colour also plays a role in mating and spawning behaviour. In mammals an antioxidant function has been found in carotenoids, in that they protect polyunsaturated fatty acids. However, this is not equally well documented in fish, but a connection has been made between the concentration of astaxanthin in the feed and amount of vitamin A in fish.

It has been proven that astaxanthin is necessary in the initial feed of salmon fry. Failure to add astaxanthin in the feed results in low weight and high mortality. The need for astaxanthin in salmon fry is about 5 mg/kg of feed (Christiansen and Torrisen, 1996).

Nor are greater amounts of astaxanthin harmful to salmon. In trials, salmon have been fed up to 200 mg astaxanthin per kilogram of feed without negative effects being reported. This is three times higher than the normal level in feed today. (All above data where the source has not been given: Christiansen, 2001)

Pigmentation of farmed fish
In marketing farmed salmon it has been found that it is necessary for salmon to have a red colour that fits the consumer’s image of salmon flesh. To achieve this, carotenoids are added to fish feed, so that farmed salmon ingest it in the same way as wild salmon. In Norway, astaxanthin, the most common carotenoid in the wild salmon’s diet, is mainly used. In other countries, such as Scotland, Ireland, Chile and Canada, both astaxanthin and canthaxanthin are used.

Before synthetic astaxanthin products came on the market it was common to use different byproducts from the processing of crustaceans, where astaxanthin occurs in esterified or protein-bound form. This makes bioavailability low, and together with factors such as uncertain access this has meant that natural sources of carotenoids are insignificant today.

The chemical structure of astaxanthin and canthaxanthin can vary. Astaxanthin consists of several isomer compounds.The division between cis-isomers and trans-isomers varies in different aquatic organisms. The division is not necessarily the same in synthetic carotenoids such as in the salmon’s natural diet (Torrisen et al., 1989). In Canada a discussion is taking place, with possible legal ramifications, as to what extent products containing farmed salmon should be labelled. Canada has considerable economic interests associated with the fishing of wild salmon. By studying the difference in isomers it can be determined whether the salmon have been given synthetic astaxanthin in the feed, and thus whether the fish is wild or farmed (Turujman et al., 1997).

Effects on health
No negative effects on health have been reported as a result of astaxanthin use, although canthaxanthin has received a lot of attention because in tanning pills it has produced injuries in the form of crystal deposits on the retina of the human eye. The EU’s Scientific Committee on Food (SCF) has found that the lowest intake of canthaxanthin producing a quantifiable effect on the retina is 0.25 mg/kg body weight/day. Since this effect had no significant impact on the function of the eye, a safety factor of 10 was found appropriate. This means that the limit for acceptable daily intake (ADI) has been set at a tenth of 0.25, in this case rounded off to 0.03 mg/kg body weight/day. Based on ADI and an estimate of how much consumers eat of various types of food containing canthaxanthin, threshold value can be set for how much canthaxanthin the feed given salmonids, chickens and laying hens can contain. EU’s Scientific Committee on Animal Nutrition (SCAN) has set the limit for canthaxanthin in fish feed at 25 mg/kg of feed. This limit is based on the assumption that the consumer eats 300 grams of salmon fillet every day and other foodstuffs in the amounts shown in the table below. (European Commission, 2002)

In other words, one would have to eat a lot of salmon to come close to the EU’s limit for acceptable daily intake. Given in addition that this limit has a safety factor of 10, you can safely conclude that it is safe to eat farmed salmon that has been given canthaxanthin in the feed, both before and after the EU’s amendment of the rules. Nor have there been reports of eye injuries resulting from the intake of farmed salmon. It is also worth noting that the retinal injuries that occurred in connection with the use of tanning pills were reversible.

The new limit of 25 mg/kg of feed is lower than what is necessary to achieve the colour that, based on market considerations, the fish farming industry believes is desirable. The result of the regulation is that canthaxanthin will probably be replaced by astaxanthin, which is already the most widespread substance in Norway. Since astaxanthin is the natural carotenoid for salmon, such a change is desirable.

However, it is to be expected that in the future astaxanthin too will be evaluated in the same way as canthaxanthin. While there are no reports of eye injuries from astaxanthin, the fact that the substances are so alike means that similar effects cannot be ruled out. Hypothetically speaking, if the ADI is set at the same as for canthaxanthin, the astaxanthin level in the flesh of farmed fish will be somewhat lower than what is found in wild Atlantic salmon, and substantially lower than what is found in Pacific salmon (O. nerka).