MOSCOW – Participants in a Moscow press conference early this week have appealed to Russian President Dmity Medvedyev to take personal charge of a case involving the attempt on the life of a prominent local journalist, who is also the leader if a local environmental movement to save the Moscow Region woodlands area of Khimki.

Published on November 25, 2008 by Victoria Kopeikina 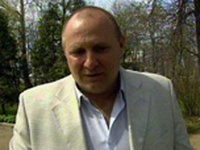 Reporter Mikhail Beketov, 50, was savagely beaten on November 13th and taken to a local hospital in critical condition, where his leg was amputated. He was then transferred to the Sklifosovksy institute, Moscow’s main intensive care unit, with pieces of his skull imbedded in his brain. He is on a ventilator and remains in a coma.

The journalist was found unconscious on November 13th in a pool of blood in the front garden of his house in Khimki, just outside Moscow city limits.

Doctors believe Beketov, whose newspaper, Khimskaya Pravda, wrote exposés on corruption and campaigned on environmental issues, was beaten with metal poles and that he may have lain in his garden for at least a day before he was found.

Beketov’s supporters say he made enemies by campaigning against a plan to build a toll highway between Moscow and St Petersburg through a forest on the outskirts of Khimki.

"He told us about a week before he was attacked that he had been informed that an order to kill him had been taken out," Lyudmila Fedotova, a close friend to Beketov, and a member of the Khimki defence group, told Russian media, adding that he had written a letter about his concerns to Russia’s domestic intelligence service, the FSB – the KGB’s successor organisation – which is not known for rushing to the aid of environmental activists or reporters.

"This is all connected in my opinion with his professional activities," Fedotova said. "Mikhail was not afraid of anyone or anything – and that is probably why he has suffered so much."

Beketov also wrote about official corruption and his latest story delved into debt operations by the local authority.

"Mikhail Vasilyevich (Beketov) always had questions that were very delicate and very tricky for a lot of people," his partner Svetlana Kuryshkina said in interviews with Russian media.

"He was never afraid of entering the fray," she said.

"I don’t know who could have done this but one thing is clear: he was the object of the attack as nothing was taken from the house or from the car."

Both Fedotova and Kuryshkina say that earlier this year someone had set fire to Beketov’s car, an attack they interpreted as a warning to him over articles in his newspaper.

A spokeswoman for the local administration declined Bellona Web’s requests on Tuesday to comment on the beating, and refused to answer questions about Beketov. She said only that what happened to him was a tragedy.

The attack in Beketov is yet another grim reminder that social activists and journalists in Russia are increasingly becoming the target of violent reprisals – especially if their protests and exposés threaten to break the rice bowls of authorities who could be cashing in on bribes and commercial enterprises.

Participants in last week’s press conference said they would take the matter directly to President Medvedyev.

“We request that you take under your personal control the investigation of the savage beating of the editor-in-chief of the Khimskaya Pravda newspaper, which was tied to his professional activities and active social involvement in defending the Khimki Forest Park from unjustified clear cutting,” they wrote in an appeal the Russian president that was signed by 1,500 people.

Many human rights and journalists’ defence groups also say they plan to bring Beketov’s assailants to justice should the authorities and police fail.

The Justice human rights group has announced a 500,000-rouble ($18,360) reward for information leading to who may have contracted the attack on Beketov. Beketov’s family has been afforded free legal council, and a collection has been taken up to cover his medical expenses.

“The investigation into the attack on … Beketov is under the special control of Russian Prosecutor General (Yury Chaikov),” the state-owned RIA Novosti newswire reported on the day of the press conference.

“Chaikov has been informed of the investigation’s of the criminal activity since the moment this brash attack was carried out, and on (Chaika’s) initiative it will remain under the General Prosecutor’s control.”

Russia’s Union of Journalists is nonetheless conduction its own independent investigation. Local police have initiated a criminal investigation, but activist don’t trust the independence of law enforcement officials – who activists say may be guarding the circle of corruption that is thought to have led to Beketov’s beating.

Citizens, not authorities, protect Moscow area environment
Local citizens in the Moscow region are on the vanguard of protesting illegal logging and deforestation in the Khimki Forest, and have created an informal movement to save the area’s natural resources, which is called EKSMO in it’s Russian abbreviation.

“Northern Moscow and surrounding communities have always considered themselves environmentally secure regions. The territory is home to a number of forests and parks that from a defensive belt for Moscow, including the Khimki Forest, the Sheremetyev Forest the parks in Levoberezhny and Old Khimki, as well as Moscow water preserves – one of the few corners of the region surrounding Moscow and the surrounding region inhabited by large wild animals,” reads the EKSMO website.

EKSMO has found allies in Zelenograd, a nearby city, were an active civil campaign against the construction of a trash incinerating plant has gained traction. The cities forming a ring around Moscow have thus become an environmental defence barrier – and their activity has visibly become a serious obstacle to money spinning activities, which upset the ambitions of local authorities and entrepreneurs.

But any involvement in the attack by authorities is not even being discussed.

“We were very surprised to find that investigators are not even considering the possibility of the (local) administration’s connection to the attack.” Fedotova said at last week’s press conference.

“It is, of course, impossible to confirm anything,” said Fedotova at the press conference. “He is a fearless man, and not one edition of his newspaper came out without repeated inquiry. Then, he smirked at the question ‘why aren’t you afraid?’ He answered, they can kill me or not kill me, but they can make an invalid of me.”

On November 20th, the local administration filed a libel suit against Beketov.

“He would definitely have won this case because everything that was written in his articles was the plain truth,” said Fedotova. “ When we saw this strong, brave man while he was being transferred from the hospital to the Sklifosovksy institute, we were all in shock, everyone was in tears – he was unconscious, his head in bandages, his leg gone, the skin on his face like glass,” she told the press conference emotionally.

Lively progress on the road to St. Petersburg
The Khimki Forest Park is slated for near total destruction by the end of 2008 to make way for the toll highway connecting Moscow and St. Petersburg. Clearing of the forest began even before the project officially started, and thousands of hectares of trees have been cleared to make way for highway infrastructure and housing developments. A protest camp last summer managed to delay some of the work on the highway.

The EKSMO movement has proposed that authorities solve transport problems in a way that is more amenable to the environment. Some of the proposals have included that portions of the highway be built underground, or that existing highways between the two Russian capitals be reconstructed.

Forested area surrounding Moscow is already in a critical condition, having dropped from 45,000 hectares in 1994 to 35,000 today.

A paper presented at a 2003 conference entitled “On cooperation between civil society organisations and executive power on problems of preserving Moscow’s nature complex,” said that Moscow was breathing only 10 percent of the oxygen that it requires. The remaining necessary oxygen comes from its surrounding forests that comprise its ecological defence belt. But even this is no longer able to save central Moscow from asphyxia.

In better days, this forest belt was better protected by legislation – but this has changed in recent years. The argument that began cutting into the territory was sparked by discussions of where, exactly, the borders of the Khimki Forest lay – which led to a rapid shrinking of the space it was allocated. Then, a 2006 decree green-light the construction of the toll highway, does not even mention the Khimki forest.

But activists have managed to define, thanks to information obtained from Russia’s natural resources ministry, the boundaries of the Khimki Forest, as well as to establish that the construction envisioned on its site is, in fact, illegal, according to a letter received from the ministry by activists.

As defined by the presidium of the Russia’s Supreme Court in 1960, the Khimki Forest is included in the forest park defence barrier around Moscow and its boundaries remain unchanged.

The decision of Russia’s Supreme Court presidium further states that clear cutting in the Khimki forest is permissible only if the area should have its special status revoked, said the letter from the natural resources ministry. The letter concludes that this status has not been revoked, nor has any legal attempt been made to revoke it.