Open hearings on Lepse dismantlement at Nerpa get environmental thumbs-up

MURMANSK – As the date approaches to dismantle the Lespe – Northeast Russia’s most dangerous floating nuclear waste storage facility – the Nerpa ship repair yard, where the dismantlement will take place, held open hearings to inform the public of the coming operation. 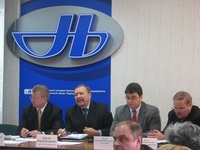 If the operation proceeds according to plan, dismantlement should commence in a year and half, according to the time frame mentioned at the public hearings earlier this month.

The vessel will be moved from its present location in Murmansk harbour at the docks of Atomflot – home-base to Russia’s nuclear icebreaker fleet – where it poses a nuclear hazard to the 300,000 residents of Murmansk.

Local access cable television covered the hearings, and free transportation from Snezhnogorsk to Nerpa was available. Environmental impact assessment documents were made accessible at the offices of Bellona-Murmansk and the administration of Snezhnogorsk.

Were the hearings of any use?
But the hearings – which were arranged by Bellona-Murmansk and the Nerpa ship repair yard – got mixed reviews.

Environmentalists believe that the hearings were useful.

“We are glad that a decommissioning project for this potentially dangerous site was made open for public discussion,” said Bellona-Murmansk Director Sergei Zhavoronkin.

Zhavoronkin said that, thanks Bellona’s efforts, the project has moved on to the international stage, and European countries will now be able to finance the preparation work for the Lepse’s decommissioning. 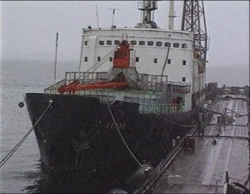 
But Galina Latypov, a Nerpa worker and resident of Snezhnogorsk – which is 4 kilometres from the plant – was vividly sceptical.

“I work at the plant and see with my own eyes how they are doing everything,” she said at the hearings.

“What they are showing the European Commission, which is monitoring the security situation, is a front, pure and simple. Now you’re telling fairytales, which can’t be made even 50 percent true,” she said, addressing the assembled speakers.

Latypov said that the public hearing was not that at all, but rather an opportunity for specialists to exchange opinions that had nothing to do with the well being of Snezhnogorsk residents.

Furthermore, according to Bellona’s legal expert, Olga Krivonos, any dissent toward a project arising from a public hearing has no legal force. Russia’s new Municipal Construction Codes, which took effect in January, did away with public hearings as a legally biding hurdle to any building or dismantlement project.

This effectively abolished the government’s requirements to conduct environmental impact evaluations prior to beginning major industrial or construction projects – from apartment buildings to nuclear installations.

“Unfortunately, under the law the opinion of the citizens and local residents bears no influence today on the decision making process,” said Krivonos.

“If the project corresponds to those norms established by the government’s decree, it can be implemented.”

What will happen with the Lepse at Nerpa?
The Lepse easily qualifies as the most radioactively contaminated vessel in Northern Europe. Owned by the Murmansk Shipping Company, the vessel was built in 1934 and then retrofitted in 1961 to fuel and de-fuel nuclear icebreakers at sea, serving primarily the Lenin, the Arctica and the Sibir.

After 1982, it was decided the Lepse would be used only for storing SNF and radioactive waste. The ship was taken out of service in 1988 and has been moored at Atomflot ever since.

What to do with the Lepse and the 639 containers of spent nuclear fuel (SNF) that it contains has been a burning question for the last 10 years. Debate still swirls around how the vessel should properly be dismantled to minimise radioactive dangers – particularly from several damaged and aged fuel assemblies on board.

Dismantlement, disposal and the hazards on board
The two leading variations for dealing with this brew of radioactive toxins that have been debated are removing the SNF– much of which is in a fragile state and very dangerous to remove – or not removing the fuel at all, essentially treating the entire Lepse as a piece of radioactive waste. This latter proposal was forwarded by nuclear scientist Yury Chenogorov, who wrote an analysis for Bellona on how to best handle the derelict vessel.

The prevailing plan, as indicated by discussions at the hearing, tends toward total removal of fuel from the vessel and dismantlement of the ship. But Bellona-Murmansk’s Zhavoronkin vowed that his organisation would continue to press officials examine the Chernogorov prosposal more carefully.

“Bellona’s demands for the project’s developer and contractors will be heard,” he said. “ We insist on comprehensive decommissioning and evaluation of the two variants for its realization: unloading the SNF and leaving it aboard…”

Hot cargo
The ship’s volatile inventory includes 260 kilograms of uranium-235, 156 fissile materials and eight kilograms of fissile plutonium 239 radio-nuclides – which, if refined to plutonium 235, would constitute the minimum critical mass for making a nuclear weapon.

The level of gamma radiation within the Lepse’s storage unit and adjacent compartments is several thousand times higher than naturally occurring levels. This complicates matters as workers can only be aboard the Lepse in short shifts.

Other special complications in dismantlement are presented by 18 fuel assemblies whose casings are damaged. They came from aboard the Lenin and the Sibir, and were already damaged when loaded onto the Lepse. They have fractured fuel casings, making them especially dangerous to remove. New methods will have to be employed to extract them.

Konstantin Kulikov, head engineer of the Onega Scientific Research Engineering and Technological Bureau, said that during the implementation of the project three kinds of heat- generating radioactive materials will have to be removed from the vessel: those that can extracted via normal means, those that are not extractable using usual methods and those that are situated in caisson type containers.

“If we cannot manage to remove the assemblies, then these heat generating sources will be cut out along with their casings,” said Kulikov.

Waste Storage
Fuel that is extracted from the Lepse will be sent to the Mayak reprocessing facility in the southern Urals. Specialists, however, are concerned that Mayak will not take damaged fuel assemblies because they are impossible to reprocess. This also holds for waste that arrives in casings.

Kulikov, however, said that whatever waste Mayak will not accept will be stored at Atomflot. It is unknown what local opinion on this proposition is.

Development and financing
A pilot decommissioning project for the Lepse was included – on Bellona’s initiative – in the 1994-1995 Euro-Arctic (Barents) Region plan, as well as in the plans of the European Commission.

More than 10 years later, however, the project has come no further – and Atomflot offered only a vague explanation as to why at the hearings.

“The delay in the implementation of the project was due to financial and technical problems,” said Mustaf Kashka, deputy technical director of Atomflot, without elaborating.

Funding for the EUR 40 million project apparently has yet to be secured. One third of the estimated cost is hoped to come from the Federal Priorities programme, which is due to be reviewed by the State Duma – but it remains unknown when that review will take place. The bulk of expenses, it is hoped, will be contributed by western donor nations.

Yury Yurlin, administrative head of Snezhnogorsk, was optimistic that dismantling the Lepse “will be no more complicating that dismantling the Kursk,” the Russian submarine that sank in August 2000 during a military exercise after an explosion in its torpedo compartment.

All 118 crewmembers died, but the submarine was raised for dismantlement at Nerpa – an especially difficult task given the damage to the vessel.

For the first year and half, the Lepse will be prepared for decommissioning at Atomflot and then transported to the Nerpa plant. During that time, technical documentation of the project will be developed as well as the necessary infrastructure for actually transporting and dismantling it.

The fuel held aboard the Lepse will be unloaded between 2010 and 2011, and the ship will be dismantled. But experts warn that these deadlines can be met only if the money comes steadily.

“This will only be possible under conditions of consistent funding,” said Vychelav Tarasov, technical director for the Aspekt – Konversiya organisation.

According to Sergei Zhavoronkin, Bellona recommendations influenced the choice of Nerpa, which has vast experience dismantling nuclear vessels.

Anna Kireeva reported from Murmansk and Charles Digges from Oslo.