The Norwegian Ministry of Foreign Affairs, in a victory for Bellona and the environment, has finally released funding to Norway’s Ministry of Defence to transport a dilapidated, decommissioned Russian November class submarine to dismantlement in a project that will cost the Norwegian Government NOK 20m, or some $3m, NRK television reported.

In the opinion of many close observers, the Foreign Affairs Ministry feels it should be the primary representative of nuclear remediation projects in Russia, and that the hold up in funding was a result of internal government dissonance with the Arctic Military Environmental Co-operation (AMEC) group.

At issue is the solving of a possible dispute between the Foreign affairs Ministry and the Defence Ministry, which administers Norway’s participation in AMEC.

The United States, Russia and the UK are also members of this group, which is widely viewed as the environmental conscience of the Pentagon-run Co-operative Threat Reduction (CTR) programme.

The release of funding is a victory both for environmental saftey and for AMEC, of which Norway, the United States, Russia and the United Kingdom are members. The project to transport the submarine, known as the K-60—which is now located at the semi-operational Kola Peninsula port of Gremikha—to dismantlement, had previously been held up, according to AMEC officials, because the Norwegian Foreign Ministry would not release funding for the unique project.

Yet the project with the K-60 could be Norway’s swan-song in AMEC involvement given earlier disputes not only within its own government, but waves made by AMEC’s newest Member, the UK, which publicised a highly critical and divisive document of Norway and the United States’ handling of their AMEC projects during principles’ meeting last year.

As a result, Norway and particularly the United States took issue with the UK’s handling of its AMEC projects—saying that the military to military arrangement of AMEC was becoming subject to commercial forces due to the UK’s reliance on RWE NUKEN, a private British contractor.

Russia has meanwhile watched on in concern that Norway and other AMEC partners would abandon it because of the perceived divisive roll the UK is playing. But for now, accord has been reached, and, according to AMEC co-chair Ingerd Kroken, agreement for at least the transportation of the vessel via a heavy life ship is at hand. 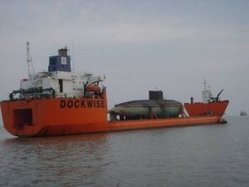 The Transportation of the K-60
The K-60, by all accounts, represents one of the most dilapidated submarines in the Northern Fleet. Rusted throughout, it cannot be transported on its own hull, even with the support of pontoons. Therefore, according to project director Thor Engøy, it will be transported in a heavy transport vessel. The vessel has been secured by Norway for use from the Dutch firm Dockwise.

According to Engøy, the heavy transport vessel has the ability to submerge its specially fitted deck beneath the K-60 and then blow its ballast tanks and rise again to the surface with the K-60 secured in special above-water cradles for its fragile hull. The transport vessel will then continue from Gremikha to Polyarny near Murmansk were it will be de-fueled and dismantled.

Securing the funding to move this dangerous vessel from the Foreign Affairs Ministry is a great triumph both for Bellona and AMEC alike.