Politicians, industry experts and the press gathered Tuesday when Bellona presented its new report on the use of CO2 for enhanced oil recovery (EOR) on Norways continental shelf.

Published on September 1, 2005 by Mette Martinsen, translated by Helle Veiersted 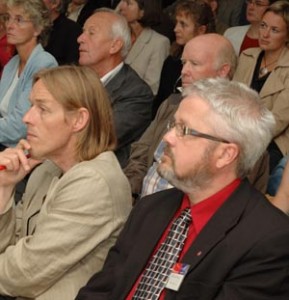 The report, entitled CO2 for EOC on the Norwegian Shelf – the Environment and Economic Growth Hand in Hand launches a brand new approach to the CO2 problem. It documents that the establishment of a value chain for CO2 to EOR will generate economic growth in Norway, and this would be a most profitable way for Norway to meet its Kyoto Protocol emissions commitments.

Bellona President Frederic Hauge said in his introduction to the report that Bellona has been working on finding solutions for more than 10 years, and that it was a great pleasure to present the results of this work. He added that Bellona is used to being ridiculed for its CO2 position but that, in a sense, that takes some of the pressure off the organisation’s work.

But those who thought that they would get the last laugh on Tuesday were in for a surprise. The reports main author, Viktor E. Jakobsen, delivered a thorough presentation of the available possibilities for using CO2 on the Norwegian Continental Shelf.

Bellona suggests to establish a stock corporation (for purification) and a state enterprise called CPETRO for sale and distribution of CO2. The suggestions were presented within the framework of a thorough business model. These are the policy measures we want, Jakobsen said.

Positive response from politicians
The attending politicians received the report very well. Conservative Party member Leif Frode Onarheim congratulated Bellona and said that this was the first thoroughly prepared report to bring this model up.

If this is anywhere near correct, it is very pleasing, Onarheim said. He added that because it is possible to examine the reports calculations and evaluate the feasibility of carrying it out, he is optimistic about getting the Norwegian Parliament on board.

Heidi Sørensen of the Socialist Left Party congratulated Bellona on the report and said that this was the work the Petroleum Directorate should have done.

This report shows explicitly that we are standing at a crossroads right now, Sørensen said. We have to emphasise the value of this technology.

She argued that the report was an important contribution to the current debate. This was especially the case, she said, because the model makes it possible to export the technology, thus increasing its earning potential.

This is very interesting, he said, and added that it was exactly the kind of model the Labour Party had wanted for a long time. The Socialist Left Partys Hallgeir Langeland expressed renewed optimism and hope about reaching political consensus in the near future.

Both the Left Party and The Federation of Norwegian Process Industries sent out press releases praising the report Wednesday.

Hauge said that the report represents a milestone.

The reactions we have received from professional circles and political parties have convinced us that we can make this happen.

The report will soon be available in English.