Mesta, Norways state owned road construction and maintenance giant, has ambitious plans of cutting their own carbon dioxide emission by 50 percent by December 2012, and has, to this end, put Norways first hydrogen vehicle—on lease from The Bellona Foundation—into commercial use this week.

Published on May 3, 2005 by Hanne Bakke, translated by Eivind Trædal 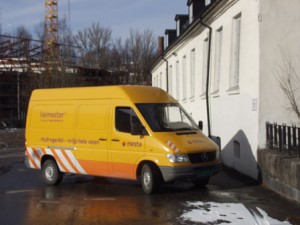 The majority of Mestas carbon dioxide emissions comes from their vehicle and machine fleet of 17,000, which ploughs through 13.5m litres of diesel fuel annually. The state owned company has approximately 6400 employees, and an annual turnover of about  770 million. The climate will therefore suffer less through more effective use of alternative fuels by the mammoth company.

We believe this is a good way of uniting environmental concerns with good business. We want to prove to the rest of the industry, as well as the government, that this goal is possible, said Johannesen in an interview with Bellona Web.

Pioneers of Hydrogen in Norway
Mesta, as the first company in Norway to make use of hydrogen as a fuel, is one of the countrys links in making greenhouse gas cuts. Mesta Oslo has, as yet, the first Norwegian hydrogen powered vehicle. The vehicle will function as one of Mestas so-called roadmaster vehicles, which are responsible for surveying roads and infrastructure, and the car will frequently patrol the streets of Oslo.

Mesta is the Norways leading company in construction and maintenance of roads, and has divisions throughout the country. The company envisions a steady increase in the amount of hydrogen-powered cars as soon as they become available. The hydrogen car Mesta is now using is leased from The Bellona Foundation, which has worked since 2002 to get the vehicle operational, approved and registered for Norwegian road use. The car was delivered to Mesta in March and underwent slight alteration before taking to the road in Mesta colours.

 This shows that Mesta is a responsible company that is serious about the current climate challenges, said Hauge.

The fact that such a big company is taking the lead is of great significance for our environmental agenda. Were impressed that Mesta has been willing to carry this heavy load with us.

Big challenges
Mesta has the recipe ready when it comes to cutting their climate gas emissions: efficiency and use of alternate fuels. Increased efficiency is going to be achieved by using GPS-navigation. This will help drivers to find the shortest route, saving large quantities of fuel annually. At the same time, Mesta will switch from ordinary mineral diesel to biodiesel throughout its vehicle and machine fleet over the next seven years. This is a gradual procedure. It will reduce emissions, but will also take time to implement. One reason is that biodiesel is harder to handle than mineral diesel and the vehicles running on biodiesel will need more frequent maintenance.

Bellona expects Mestas initiative to be key for further use and distribution of alternative fuels in the future.

We have been waiting for a company willing to take o the cost of being the pioneer in this field. Now, there is a demand for both hydrogen and biodiesel in the Oslo-region, which will make the introduction of these fuels much easier, said Isak Oksvold, Bellonas hydrogen project manager.

Im sure Mestas initiative will set a best-practice in the industry. Its also nice to see that the hydrogen car we have managed to get registered is finally being put to good use after almost 3 years of modifications and approvals.

Mesta has been a member of Bellonas business community programme for co-operation with companies and industry since 2003.