For the first time since the adoption of regulations guiding the decision-making processes for European Commission committees in 1999, the European Parliament stated this week that the Commission had exceeded its implementing powers regarding the Commissions work waste handling. 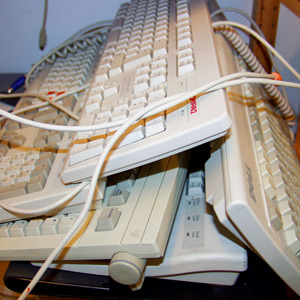 The Restriction of Hazardous Substances in Electrical and Electronic Equipment (RoHS) Directive was signed by the EU-parliament and the Council on February 13th 2003, and stipulates restrictions on the use of certain hazardous substances in electrical and electronic equipment. According to the Directive Member States must ensure that, from July 1st 2006, new electrical and electronic equipment put on the market does not contain lead, mercury, cadmium, hexavalent chromium, polybrominated biphenyls (PBB) or polybrominated diphenyl ethers (PBDE).

Parliament found that the Commission gave exemptions where alternatives were clearly available, thus exceeding its mandate. The Commission is now obliged to re-examine the draft decision. If it should then still decide to adopt it unchanged, the European Parliament will need to take the Commission to court.

This will have important effects on further decisions. The Commission has consulted on another 22 exemptions and calls for a vote on April 19th to exempt a particularly controversial substancethe brominated flame retardant decaBDEeven though its own Scientific Committee strongly recommended risk reduction measures for it. The parliaments interference is in accordance with the Bellona Foundations response, to the Stakeholder consultation on possible exemptions under the RoHS-directive. Read Bellonas response here.

The Parliament will now keep a close eye on future exemptions to the RoHS directive. Satu Hassi, the Greens/EFA Vice-chair of the Environment committee stated the following:

"The European Parliament today sent a very strong message to the Commission: ‘We will not tolerate that key pieces of environment legislation adopted by Parliament and Council are undermined via the backdoor of decisions in committee. Where there is a viable safer alternative, lead and cadmium must be replaced. It is unacceptable that the Commission and the Council ignore this when the Parliament does not sit on the table and adulterate important pieces of environmental legislation due to commercial considerations that are out of the scope of the directive. I hope that we can avoid a court case – but that requires that the Commission takes its political responsibility to correct this decision."

A first test of whether the Commission takes the Parliament seriously will be next week’s vote on the hazardous brominated flame retardant decaBDE. If the waste unit of the Commission wants to avoid another Parliament resolution stating that the Commission exceeds its mandate, it should withdraw its proposal to exempt decaBDE from the RoHS directive."