Thinking back, the so-called reforms in the Russian Pacific Fleet began with the liquidation of remote radio listening posts. The posts were distributed along the Kuril Islands and in similarly inaccessible places. On a visit one of these outposts, I remember that one young sailor approached me and asked, «Do you happen to know whether a medical ship is going to make a stop here again? Last year when they visited they only gave me a temporary filling for a cavity». Once a year, or once every six months at best, these posts were restocked with only the most necessary supplies. Then someone really clever decided that this was too burdensome. As a result, the country lost an effective detection and observation system over a vast area of the Sea of Okhotsk and in the vicinity of the Kuril Islands. 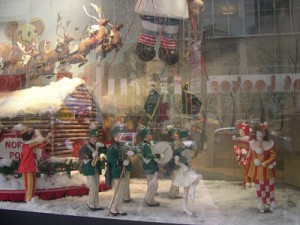 This testifies to the fact that larger trouble, as a rule, begins with the little things that get neglected. The billions of dollars of response-aid clattered together clearly will not return the lives of those lost in the tsunami. (A poignant reminder of the idiocy of soviet television, which forbade even the use of advertisements that portrayed large waves. Thats how the Japanese painter Hokusaya was censored  tsunami are a frequent motif in his paintings). Only after the tragedy did discussion begin about the need to invest in the creation of an effective tsunami warning system. A crisis that wiped away 150 thousand human lives got the hint through.


In Washington, the temperature at the beginning of January was over 20 degrees Centigrade. According to long-time residents, there has never been anything like this before. Maybe 5 degrees, maybe 10, but 20?! Global climate change isnt just the crackpot scheme of some environmentalists and a few scientists. Its a reality. The planet needs to be studied, it needs to be cared for and cherishedits our mutual home. And all of these local wars, power struggles over oil pipelines, and banalities of daily life  all of it is pettiness. Present-day politicians, it seems, have two time frames in mind  today (to see that they arent wiped away by a wave of popular wrath) and tomorrow (to make sure theyve secured themselves a place at the pipeline trough). They dont want to think about the fact that fate and history have got a very different place ready for them.


At the end of last year the Russian Minister of Natural Resources spoke in a newspaper interview about his successes of the last almost-year (the previous minister was sacked in the spring). I even got ready and picked up a pencil to take notes, but it turned out I didnt need it. The Minister only remarked about the redistribution of resource extraction licenses. He was, naturally, talking about oil. But of course, what else would you talk about in Putins Russia? Just about the «redistribution» of what may not have quite been entirely stolen. No one is looking to the future. Have you seen any announcements about tree numbering in urban centers? I saw it here in Washington, and I understood that here people are looking aheadand not just for themselves, but for their children, grandchildren, and great-grandchildren. Obviously, these trees arent the definitive example of nature protection in America (there are still plenty of problems), but it is an important indicator.


In their free time on weekends, many residents of the American capitol visit museums, go jogging and even work in their offices. To be healthy, smart and successful here is considered a sign of good manners. If Americans were given an official ten- or twenty-day holiday, they would go right on visiting museums, jogging, and working in their offices. Now about us, my compatriots! The daughter of one of my Russian acquaintances works in Yaroslavl as a toxicologist. Already on January 5, she told her father that she was shocked by the number of cases of alcohol poisoning and people turning to her for help. At the end of these quickly approved but endless holidays, shell probably drink herself into a stupor to relieve herself after witnessing the endless Russian binge.


Which raises the question: did anyone in the Duma or the Presidents Administration think about the welfare of the people when they passed the law extending the holidays? Were they thinking five, ten, or twenty years ahead?


I think that they were thinking, but not about peopleabout some pipeline. About how they would stick their personally numbered name-tags on every one of them. About how they could sell «Yuganskneftegas» through opaque, confusing maneuvers. Or about canceling the proposed raise of the draft age. Or about how, next time, theyll really blast the Minister of Culture. Or about how, using refined language (and not just «Hes the idiot!»), theyll parry the criticisms of Western democrats about human rights violations and the absence of freedom of speech in Russia.


Its doubtful that anyone thought about restoring remote communications outposts, or about numbering trees.