Much anticipated Kyoto Protocol to take effect in February

Russia yesterday handed over its official ratification documents of the Kyoto Protocol to reduce world-wide greenhouse gas emissions to the secretary general of the United Nation, Kofi Annan.

Published on November 19, 2004 by Hanne Bakke, translated by Charles Digges 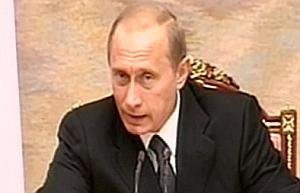 The hand over of the documentation took place during a meeting of the UN Security Council in Nairobi, Kenya. Russias ratification of the treaty aimed at reducing emissions of gasses dangerous to the climate will finally take effect on February 16—90 days after the delivery of Russian President Vladimir Putins signature.

The hand over of the documentation took place during a meeting of the UN Security Council in Nairobi, Kenya. Russias ratification of the treaty aimed at reducing emissions of gasses dangerous to the climate will finally take effect on February 16—90 days after the delivery of Russian President Vladimir Putins signature.

–>
This is a historical step forward in the worlds battle against a true global threat, Anna said in a statement. He also emphasised that Russias ratification of the protocol puts and end to the seemingly endless uncertainty of the Kremlin over signing Kyoto—which was presented first in 1997 at the Kyoto gathering of the then-Group of Seven industrialized nations—would ever take force.


After months of public wavering, and a public battles between Putin and his top economic advisor Andrei Illiaronov—who was vehemently opposed to Russias ratification of the protocol, saying it would strangle Russian industry—the presidents cabinet submitted it for ratification to the Russian State Duma, which signed off on it in short order on October 22. It was then cleared by the Federation Council, the Dumas upper chamber and signed by Putin.

These documents were then passed to the UN yesterday.


There has been much speculation that Russias final capitulation to Kyoto was based on implicit promises from the European Union—which has ardently supported the protocol and been in shuttle diplomacy with the Kremin to secure its signature—that Moscow will have a seat at the World Trade Organisation table.

–>
Russias endorsement of the treat has been necessary since 2001 when the United States declared it would not support the Protocol. The Kyoto Protocol must be signed by industrialised nations that account for at least 55 percent of total industrial and greenhouse emissions. Until yesterday, the Kyoto had the support of countries accounting for 46 percent. Russia alone accounts for some 17 percent of these total emissions addressed in the Protocol. The USA accounts for 32 percent.


From February 16th a combined 128 nations will be obliged to honour the treaty direction them to reduce their own emissions levels of six climactically dangerous gasses by five percent a year until they reach 1990s emissions levels by 2012.


Next month, the signatory nations will gather for the COP 10 climate conference in Buenos Aires. Last years conference was dominated by Russias vacillations over ratifying Kyoto. Now, this years conference can distinguish itself by addressing future challenges.


Annan is also calls on participants of COP 10 to seize on possibilities that lay in the fact that the Kyoto protocol will now come into effect in 90 days.