Russia’s Cabinet, President Vladimir Putins inner circle, approved the Kyoto Protocol on Thursday in a crucial step toward putting the long-delayed climate change treaty into effect, although without participation by the United States.

Published on October 1, 2004 by Charles Digges 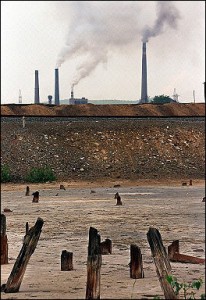 Final approval by the Russian State Duma, which would push the treaty past its required ratification threshold, was not guaranteed, however, Duma officials told Bellona Web. They added they did not know when the governments approval of the ratification would come to debate on the Duma floor. While the State Duma generally approves legislation backed by Putin, many Russian officials remain opposed to the pact, fearing its restrictions on greenhouse gas emissions could hinder economic growth.

Prime Minister Mikhail Fradkov, on a trip to the Netherlands, said he expected "difficult debate" when the Duma meets to vote on ratification, possibly before the end of the year, the Associatred Press reported. Putin’s economic adviser, Andrei Illarionov, Putins chief economic advisor, deplored the Cabinet’s approval, saying it was "a political decision that will damage national interests in many areas," the ITAR-Tass Russian state news agency reported. Nonetheless, Illarinov, says he will support the approval of the agreement as a political gesture towards the European Union.

With Putins tight squeeze on democratic rights these days, the political atmosphere between Russia and the West is tense. Putin wants back in under the wing of the west and he is now using of one of the means he has to gain such international goodwill, said Bellona Paal Frisvold, one of Norways leading experts on European politics.

Russias support will save Kyoto
The treaty, drafted in 1997 at a UN conference in Kyoto, Japan, seeks to reduce emissions of carbon dioxide and other gases that are widely seen as a the driving force behind global warming. Without Russia’s support, the pact  which has been rejected by the United States and Australiacannot come into effect. It needs ratification by 55 industrialized nations accounting for at least 55 percent of global emissions at levels measured in 1990.

The Russian Cabinet’s action was cheered by United Nations officials, the governments of Germany, Italy, Britain and Japan and the European Union, which have been among the agreement’s most fervent backers, international news agencies reported.

"Russia’s green light will allow the climate train to leave the station so we can really begin addressing the biggest threat to the planet and its people," Klaus Toepfer, head of the UN Environment Program, told AP.

Whats the Trade-off?
Most analysts have suggested that yesterdays decision by Putins cabinetwhich flew in the face of earlier official opposition to signing the treatywas the result of Russias desire for a coveted position within the World Trade Organisation, or WTO.

In May, Putin indicated that if the WTO would embrace Russia as a full member, Russia would deliver its signature on the Kyoto protocol. For its part, the European Union, or EU, said it would lift its veto against Russias entrance into the organization if it signed of on Kyoto.

WTO membership is extremely important for Russia, Frisvold said. It means Russia can trade on better terms with other nations and with increased trade comes increased economic growth.

Additionally, because Russias emissions have fallen 32 percent since 1990 due to post-Soviet industrial breakdown, the country stands to reap enourmous revenues in the sales of emissions quotas. Under Kyoto companies that emit less carbon dioxide than allowed will be able to sell unused allotments to those who overshoot the target, offering a profit motive for manufacturers to cut emissions and for other businesses to develop improved emissions technology.

Frisvold agreed that the quota trade was another important motivating factor for Putins cabinet to give the protocol the green light.

The 100 million dollars that Russia will make as soon as the trading of quotas is initiated also serves as a good incentive for Russia to sign the Treaty, he said.

Europe also to benefit from the emissions quota trade
The task of reducing emission of greenhouse gases without staggering the European economy has created high tensions between EUs energy and environmental commissioners. To buy quotas is essential for many companies to survive, and EUs Energy Commissioner Loyola de Palacio has long worried that without Russian quotas for sale, the European economy may loose its competitiveness. Now with Russia apparently in on the agreement a much larger market for tradable quotas has opened. Quota trading could start in full as early as of January 2005

Disagreement between US and Europe still simmers
Discord on how to tackle global warming has been a major source of European ill feeling toward the United States, which alone accounted for about 36 percent of the world’s carbon dioxide emissions in 1990.

The US government says the pact would harm the US economy and also argues it favors developing nations like China and India that are big polluters.

In Washington, State Department spokesman Richard Boucher reaffirmed US opposition to the agreement in a statement to Bellona Web on Thursday. He noted that the United States is pushing ahead on its goal of reducing the nation’s greenhouse gas emissions by 18 percent within the next eight years.

Under the pact, which would take effect 90 days after Russian ratification, industrialized countries are supposed to cut their collective emissions of six key gases to 5.2 percent below the 1990 level by 2012.

"The Kyoto Protocol undoubtedly sets very low targets compared to what scientists say is necessary in order to keep climate change under control," said Germana Canzi, a climate policy expert with the World Wide Fund for Nature told AP. "However, it has always been considered a first step rather than the solution to the problem."

A new round of climate talks is scheduled for December in Buenos Aires, Argentina, and negotiations on greenhouse gas emissions after 2012 are due to start next year.

Illarionov, Russia’s most outspoken Kyoto opponent, and other officials have argued that joining the pact would put a damper on Russia’s economic growth and make Putin’s goal of doubling its gross domestic product in a decade unattainable.

Russia has been under intense pressure from the European Union to sign on to the treaty, and Putin said in May that he would speed up approval in return for EU support of Russia’s bid to join the WTO.

"Ratification will remove many irritants in our relations with the EU," said Konstantin Kosachev, the powerful head of parliament’s foreign affairs committee. "From the political viewpoint, I have always supported ratifying this pact."

Resistance in Russian Federation Council
The smooth path to finally get the treaty enforced internationally could however become bumpier than first expected as The Russian cabinets endorsement of the Kyoto agreement meets resistance in the upper chamber parliament.

– There are a number of representatives of various business organisations, including aluminium, oil and energy ones among the senators. These people are opposed to ratifying the document, Oganes Oganian, head of the Federation Councils committee for economic policy, told Interfax.

Even though President Putin has full majority in the State Duma such resistancy could delay the process of getting the Kyoto agreement ratified. The battle to get the Dumas approval as soon as possible has started, and the Euobserver reports that green groups are working hard to get the agreement passed through the parliament. Without Russias signature the entire agreement remains on a stand by modus internationally.