Monument to the pendulum—why did Russia vacillate on Kyoto?

MOSCOW—And the pendulum keeps step with time, the Polish writer and satirist Stanislaw Jerzy Lec once wrote. The policies of the President of Russia in recent years are somewhat like a pendulum—strangling democracy one day, and suddenly coming out with a clearly good idea the next. The news about the Kyoto Protocol is one of the latter. But since a pendulum has one chain, this decision of Russian President Vladimir Putins should give us pause: Has this decision not been caused by reasons far removed from ecological concern and been motivated by a sincere desire to adapt to global international projects? 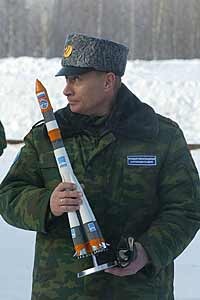 More than a year ago, I spoke with the Deputy Minister for Economic Development and Trade, or MEDT, Mukhammed Tsikanov, about Russias possible ratification of the Kyoto protocol. At that time, the position of the MEDT was clear and precise: It is not advantageous either economically or ecologically for Russia to sign the Kyoto protocol. Before then, there had been no clear and intelligent explanation of such ratification for Russia—only general theoretical discussions. Meanwhile, Tsikanov said, even without the protocol Russia was allocating 17 billion rubles a year from its budget on forest preservation alone, 200 million rubles on implementation of the law On Baikal. And anyway, he continued,Canadian and US factories pollute the oceans more than Russias, and Norilsk Nickel is not spoiling Sweden [] in a word, Russia is too good to need to bother with some protocol.


What is most interesting is that, back then, last year, the MEDT was not, in principle, against Russia signing the Kyoto Protocol, saying it was not opposed but that it could not find any great reason to do so.


The fact that in October of this year Russia intends to ratify the Protocol—and that the President has stated this publicly!—is, of course, not evidence in and of itself, that someone found a reason to sign on the protocols dotted line. One thing, though, is obvious: a political reason was found, and it was decided to turn a blind eye to the economic and ecological aspects (although some observers say that both of these are present, if only in the long view).


Thus, the European Union, or EU, is approaching implementation of the Kyoto Protocol—a UN pact drawn up in 1997 in the struggle with climate change by means of reducing emissions of carbon dioxide around the world by 2010 by percent of the level measured in 1990.


So far, 123 countries have ratified the treaty, including the 25 members of the EU, but it has not come into force, because the necessary support from countries that between them produce 55 percent of industrial emissions has not been forthcoming. The United States, which produces the largest quantity of greenhouse gases, has refused to ratify the agreement, saying that it will hurt its national economy. Russia has also not yet signed.


Remarkably, one of the main arguments used by the Russian side to explain its refusal to sign the document was the US position.

In the summer of this year, the report Consequences of Europes Changing Climate was published. The report talked about the necessity of adopting the Kyoto Protocol, and noted that the 1990s were the hottest decade in history, that the record-breakingly hot years—in 1998, 2002, and 2003—had occurred in the last six years, and that the average world temperature is at present rising by 0.36 degrees per decade.


European floods two yeas ago and last years heat in Western and Southern Europe were cited as examples of the destructive action of global warming.


As a result of the flooding, about 80 people died in 11 countries, and more than 600,000 people were affected; economic losses amounted to at least $18.5 billion dollars. More than 20,000 deaths, mainly among the elderly, were recorded during the 2003 heat wave, and up to 30 percent of crops in southern countries were ruined.


Europe, it seems, felt the full force of climate change, and therefore international green organisations, the EU, and the German government recently gave a resounding welcome to the decision made by President Putin, who after three years of delaying tactics and waffling statements at last gave approval to ratify the Protocol. As the German Environment Minister, Jurgen Trittin, was quoted by international media as saying, This is evidence that Russia is aware of its responsibility in the battle with global climate change.


Recognition of responsibility, or opportunity knocks?

It would be nice to be able to agree with Trittin, but observers in Russia suggest that this decision, and its timing, is an attempt to stifle negative reaction from the international community regarding Putins plans for the war against terror announced following the Beslan hostage crisis and its bungled denouement. These plans were seen in the West as the further limitation of democracy in Russia.


Clearly, we can suppose that one factor in the Russian authorities adoption of such a decision was the efforts of various European countries—in particular the northern block of Sweden, Denmark, and Finland—and those of British Prime Minister Tony Blair and German Chancellor Gerhard Schroeder. Putin could not but listen to them—but thats all he did, because the real motivation for the decision is current circumstances. Conditions were created in which the regime saw it necessary to give way. Even the presidents economic advisor, Andrei Illarionov, stated that ratification of the Kyoto Protocol was a necessary political decision. Illarionov also underlined that ratification of the Kyoto Protocol will make doubling of Russias GDP impossible regardless of the task set by the president.


In the conditions of limitation established by the first phase of the Kyoto Protocol, doubling of GDP is impossible. This is the reality which we must understand, Illarionov said, according to news agencies.


This decision damages out national interests in the short, medium and long terms.


We should also remember that Illarionov called attempts to bind Russia by the Kyoto Agreement colonial pressure, an international Gulag, and a death sentence for economic growth.

It is also not out of place to remember that many people and organisations in Russia are in a state of denial over the exigency of signing the Kyoto Protocol. For example, the Russian Academy of Sciences held a seminar in March entitled Possible Prevention of Climate Change and its Consequences. The Problem of the Kyoto Protocol. The following are just some of the opinions which were voiced during the seminar.


In his report, Professor Oleg Sorokhtin noted that a significant build-up of carbon dioxide in the atmosphere, all other things being equal, could lead only to the temperature of the troposphere being lowered, not raised, as is usually thought. Analysis of the theoretical framework and experimental data show that the reason for climate change is temperature fluctuation, and that changes in the partial pressure of carbon dioxide and methane in the atmosphere are only a consequence of this. If global warming is going on, then the reason for this should necessarily be sought in natural processes—such as the revolution of the earth, changes in the Suns light, changes in the ocean cycle, in periodic desalination and salination of the Polar Ocean, and so on.


The offered report by Professors Konstantin Demirchan and Kirill Kondratyev expressed the view, based on the results of scientific research, that existing models widely used by the MEDT in support of the necessity to take urgent measures on limiting emissions, mainly carbon dioxide, do not reflect the real picture of the carbon cycle in nature. The model of the carbon cycle presented in the report demonstrated that expectations of carbon emitted into the atmosphere staying there long-term are unfounded.


Agreement on Ratifying the Protocol is in the Political Realm

Before Putins pronouncement, all arguments against ratification carried weight. But now Putin has put them all to one side on the basis that the advantages for Russia now outweigh the doubts and risks. In all fairness, we should note that these doubts have not been fully dispersed. The government received documents from the Kremlin ready for approval, although the ministries—which Prime Minister Mikhail Fradkov had given until April 16th 2005, to deal with the problem—have not come to a unanimous conclusion. Thus, the Ministry of Industry and Energys latest conclusions on the consequences of ratification said that: Expert opinion does not allow us to give a simple appraisal of the effectiveness of Russian ratification of the Kyoto Protocol.


The political changes began this summer. In May, Putin said that the Protocol ratification process would speed up if the EU in exchange gave its support to Russian entry to the World Trade Organisation, or WTO. The idea was expressed that Russia would need favourable conditions on trade quotas of unused emissions—which Russia has in vast quanties—which would still need to be developed. The quota system present in the Kyoto protocol allows those countries with emissions levels below those of 1990 standards to sell their surplus fresh air to countries who are above 1990 levels. Russia would aim to sell quotas to other countries, counting on earning billions of dollars out of this. (In the above-mentioned discussion with Tsinakov, the figure of $200 per one tonne of carbon dioxide gas was mentioned.)


The head of Rosgidromet, the state hydrometeorological service, Alexander Bedritsky—the main Russian negotiator in the UN for the Kyoto Protocol—admitted at once that the president took the decision on ratification, and said it was a pragmatic decision. Bedritsky explained, according to Russian news wires, that: If Russia does not ratify the protocol, then the countries that had ratified it would attempt to reduce the minimum level of combined emissions, and as a result the protocol would come into force, and we would remain outside this process.


Professor Yury Izrael noted that entering the protocol is easy, but leaving it is another question. However, the text of the Kyoto Protocol says that any country may leave it after three years of signing on. According to Izrael, Russia can get no more than EUR300-400 m, and definitely not the billions talked about in the press.


Illarionov and Izrael insisted that the protocol has no relation to global climate change, and is a deeply political document. (Recall that this was said at a seminar at the Academy of Sciences.)


So, it seems as though there is only one explanation for Russia agreeing to ratify the Kyoto Protocol, and that explanation can be found in politics. We could ask, what does it matter which sphere its in? The most important thing is the result. It would be possible, if Russia were to be a reliable partner, to make decisions based not on current political considerations but on the realities of global processes. No-one, after all, can guarantee that, having once joined the Kyoto project all of a sudden, Russia wont equally suddenly leave it. Circumstances change, or Putin gets different advice  and he is currently getting advice not to sign the Aarhus Convention, which would give the world public greater access to information about environmental probelms. However, that is another story.