The Norwegian government’s proposed budget deals a heavy blow to the electric vehicle revolution and levies a new tax on the emissions-free cars that could weaken incentives for Norway’s drivers to leave fossil fuels behind.

Published on October 18, 2017 by Bellona Europa 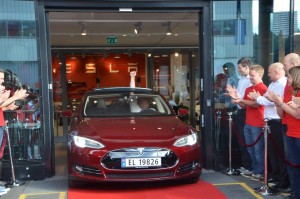 The Norwegian government’s proposed budget deals a heavy blow to the electric vehicle revolution and levies a new tax on the emissions-free cars that could weaken incentives for Norway’s drivers to leave fossil fuels behind.

Norway has gained such a stunning edge in electric vehicle ownership that the country could abandon fossil fuelled cars all together by 2025. Driven by tax incentives, special traffic privileges and a blossoming charge station infrastructure, electric cars captured 37 percent of the Norwegian car market by the end of last year. At the moment, there are more than 126,000 electric cars on Norway’s roads, 25,000 of which were sold since the beginning of this year. National carbon dioxide emissions, meanwhile, are declining.

But now, the government says this is costing it money. The Norwegian State Budget for 2018 would tax electric cars by weight, threatening to derail their progress, especially among the growing number of Norwegians who are considering heavier electric cars as their main family vehicle.

The proposed budget would apply to EVs weighing of more than 2 tons, which would be taxed at a rate starting at NOK 7,000 (€740) and going as high as NOK 70,000 as the weight goes up. The new figures would drive up the cost of owning a Tesla Model S, widely seen as the most family friendly electric car on the market. At the same time, the budget leaves entirely untouched the fuel tax for gasoline and diesel fuel.

Bellona President Frederic Hauge said the proposal would primarily hit commuters and families who live in the suburbs – the sort of drivers that might be on the fence about swapping out their fossil fuelled cars for an electric sedan. Because of this, he said, the new tax would erode Norway’s world leadership in electric car ownership.

“This position will now be weakened,” Hauge said. “”This especially affects people in the districts and commuters who would switch to zero-emissions cars. Additionally, it will affect families looking for an EV model to replace the fossil fuel car for long trips.”

He also criticized the proposal on the grounds that numerous Norwegian cities are currently in violating EU air pollution regulations – pollution they could reel in by going electric.

Norway’s electric car revolution was buttressed by an incentive program pioneered by Bellona and adopted at a government level the early 1990s. Now, after a quarter of a century, Norway enjoys the highest market penetration of EVs in the world.

The new fees and taxes, Bellona fears, could derail all of that, creating public scepticism toward electric cars and relegating EV ownership in Norway to the same doldrums they have hit in Denmark.  When Copenhagen phased out its EV incentives and imposed a 20 percent tax on the sticker price of electric cars in 2016, sales dropped off by almost 300 percent.

There are better ways for Norway to collect revenue. Specifically, it could increase fuel fees on fossil fuelled cars. Yet, as Hauge points out, the current budget proposal would make heavier fossil fuel driven cars cheaper by comparison to their heavier electric counterparts.

“To introduce electric car fees without increasing the taxes on fossil-driven cars accordingly is simply ridiculous – these charges should rather be based on the ‘polluter pays’ principle,” Hauge said. “This has a negative effect internationally and is really detrimental to electric car development.”

The tax also thwarts stability for electric car manufacturers in an industry that needs to be able to predict framework conditions over several years.

“Manufacturers have estimated tax exemptions to 2020”, said Hauge. “Such a new fee simply signals that we do not want large family cars.”

The supporters of the fee argue that it’s relatively small, especially because people who buy so-called ‘millionaire cars’ can afford the uptick in price. But Hauge underscored that most Tesla customers come from your average family. They buy according to their budgets, adding up what an electric car costs and considering what they will save, including tolls, fuel and maintenance ­– and they end up choosing an EV. Added to that, they need cars that have enough space and drive range. A car like that has to have a powerful battery pack, and that weighs more than a gasoline tank.

What’s more is that market studies show that cheaper EV models – which have a smaller distance range because they have smaller battery capacity – are more often bought as second vehicles. So buying one of these cheaper EVs, as a consequence, only partially contributes to reducing CO2 emissions. By contrast, Tesla’s market analysis shows that most buyers of its Model S tend to buy them as their only car, and thereafter leave fossil fuel cars behind.

Currently, only the Tesla offers vehicles that meet the needs for range and space of most families. These vehicles are also the only ones that weight more than 2 tons. 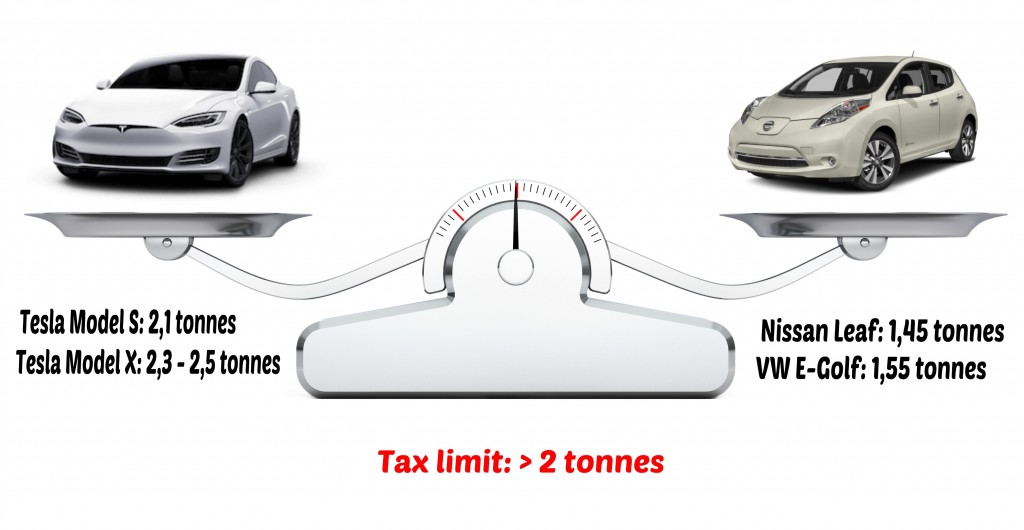 It’s not just the tax on family cars that will go up – electric cars for company and business use, like Oslo’s electric taxi fleet, will spike too.

According to the proposed state budget, the distribution tax on an average company EV – like a Volkswagen Golf – would go up by about NOK 20,000 (€2100), while drivers of more expensive company electric cars like a Tesla S, would pay twice that.

Here too, Tesla is the only fully electric option available to compete with fossil fuel cars like Massat, Mondeo and Avensis.

Many company vehicles are used for both business and private purposes and are often driven further than a private car would be in a year. Here, the effect on climate and pollution is particularly significant, if we can successfully replace company cars with electric ones.

The financial and practical incentives that benefit EV drivers in Norway has made electric cars a convenient, cost-effective and environmentally-friendly means of transportation, which is making fossil fuel cars – and their pollution – a thing of the past. And Norwegian drivers are drawn to helping the environment by the low sticker price: Most of those surveyed cite ‘cost savings’ as the reason they bought their electric cars.

So the new taxes on EVs don’t make sense to Bellona. Taxes based on price segments will only shift the popularity of e-cars and the environmental benefits they guarantee into a lower gear. On the other hand, raising taxes on carbon dioxide puts a price on polluters. Shying away from that, and taxing price segments instead, is the wrong model for Norway – and countries – to follow.