In what one hopes might be the beginning of an invasion, the month of August brought the city of Murmansk its first tourist arriving in an electric car. The mysterious driver then charged up at the Park Inn Hotel on a charger that Bellona gifted the city earlier summer. 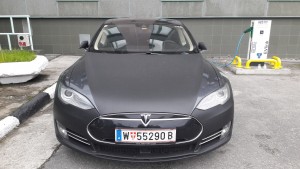 The Tesla Model X that ghosted into Murmansk from Austria. (Photo: Park Inn by Radisson)

In what one hopes might be the beginning of an invasion, the month of August brought the city of Murmansk its first tourist arriving in an electric car. The mysterious driver then charged up at the Park Inn Hotel on a charger that Bellona gifted the city earlier summer.

The charge station – which is Russia’s northern-most e-car plug in – was a donation from Bellona to Murmansk’s Park Inn Hotel, and for the first two years it’s there, electric car drivers can charge their cars for free.

Of course, the whole project is designed to popularize ecologically clean technology and to reduce emissions from cars with internal combustion engines. No one, however, would buy an electric car at the prices they fetch if they didn’t have anywhere to charge it.

So Bellona’s e-car charger, which marks Russia’s year of the Environment, is geared toward a time when electric cars in Murmansk become more popular than they are now, which they admittedly aren’t yet. Local traffic authorities report only one electric car is registered within the city limits.

For the time being, the charger has added charm for the occasional foreign tourist who wants to motor into Russia’s Arctic capital on lightning – but no one expected any of those just yet.

Imagine, then, the local shock just two months after the charge station opened when one such tourist showed up all the way from Austria.

Unfortunately Bellona wasn’t able to interview the driver, who charged his car at the Park Inn, hung around for a weekend, and then was gone just as quickly. It can be assumed he drove into Russia via Scandinavia, which is replete with charge stations of its own, and he likely disappeared down that route as well.

“One usual morning, a guest showed up at reception and asked for the key for the charge station for his electric car, “ Marina, who works at the Park Inn, told Bellona. “All hotel personal know about the charger. We followed its installation and we are proud our hotel can offer such a service. But, honestly, at that moment, we were caught off guard.”

The problem, Marina said, was that no one knew where the key to the charger was. That was a question for the hotel’s chief engineer, who was at the moment on vacation, and he hadn’t left any instructions – after all, no one really expected that charger would get much use so soon.

“It was really unexpected,” said Andrei Milokhin, the hotel’s deputy general director. “We were sure someone would need the charge station, but we didn’t think it would happen right away this summer – but there wasn’t any time to be surprised or happy, I had to solve the problem.”

He said his team pulled together and got the job done. 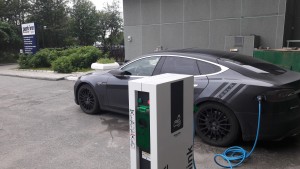 A Tesla Model X on Bellona's charger in Murmansk. Credit: Courtesy of Park Inn by Radisson

“The driver didn’t even have time to drink the coffee we offered him and we did it,” said Milokhin. “We gave him the key, and thanks to clear instructions provided by Bellona, there weren’t any problems with plugging the car in.”

Milokhin said the driver stayed for a weekend and charged his car a few times over a number of road trips around the city.

“I can now confidently say that even when the manager and the chief engineer aren’t around, all personnel at the hotel know what to do if someone wants to use the charge station,” Milokhin said.

He added that he was especially proud that his hotel was able to add the first bit of infrastructure critical to meet the European electric car craze.

Granted, the craze has yet to hit Murmansk ­– or indeed Russia – full force. The city boasts a single Tesla Model X, which is one electric car among the 920 registered throughout Russia as a whole.

According to government statistics, those e-cars represent a few popular models. Three hundred and forty-seven of them are Nissan Leafs. Those are followed by 263 Mitsubishi i-MiEVs, and 177 of the Tesla Model S.

Russia’s own native electric car, the LADA Ellada, makes a strong showing at 93 registered models. The Renault Twizy, Tesla Model X and BMW i3 are less popular, at less than 20 registered models each.

Not surprisingly, 281 of Russia’s electric cars are registered in Moscow, which over the past few years has worked to expand its e-car charging capabilities. Following Moscow is Russia’s Far East Primorye region, with 136 electric cars, and in third place is the Moscow Region with another 58.

Then comes the Samara Region, with 51, followed again in the Far East by the Khabarovsk Region’s 50. The liberal bastion of St Petersburg boasts only 45. But that’s more than are in Stavropol and Tatarstan, which have 23 and 14 respectively. The remaining 45 are registered in the Krasnodar Region.

To boost these numbers, Russia needs to pursue not only benefits and tax rebates for buyers of electric cars, but enhanced charging infrastructure as well.

A 2016 government decree says that all Russian gas stations are now supposed to include at least one charge station for electric cars and hybrids, but that is hardly being taken seriously. Nonetheless, e-car chargers are slowly proliferating in Russia’s biggest cities ­– and, of course, the Park Inn Hotel in Murmansk is plugged in as well.