Mitsubishi Motors has yesterday, 20 April 2016, admitted to having manipulated emission tests on at least 625,000 of four of its mini-car models. These include its eK mini-wagon as well as 468,000 similar vehicles build for its Japanese compatriot Nissan. The announcement of the car maker’s failed fuel economy tests sent its shares down more than 15%, wiping roughly €1.05 billion from its market value on Wednesday and making it the stock’s biggest one-day drop in almost 12 years. 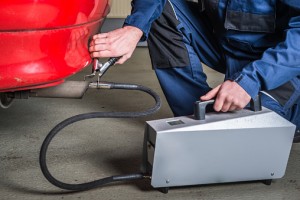 The mismatch between Mitsubishi’s reported and actual on-road emissions was first spotted by Nissan who was conducting emission tests on vehicles supplied by Mitsubishi Motors. Nissan subsequently requested an investigation, in turn leading to the discovery of the test manipulations. According to an official statement, both Mitsubishi and Nissan have decided to stop production and sales of the affected cars, and will discuss compensation regarding the issue.

News about Mitsubishi’s fraudulent car testing practices come after similar revelations concerning Volkswagen, Audi, Porsche, Renault, Opel and Daimler. Over the past months, since the so-called dieselgate scandal was ignited by Volkswagen, fraudulent emission testing practices have been found to affect not only NOx but also CO2 emissions, contributing to urban air pollution and climate change.

While cheating practices have helped car makers achieve significant cost savings, amounting to roughly €7 billion, from complying with EU regulations, the associated costs incurred by society have been detrimental, in the form of deadly air pollution levels and human lives at stake. In fact, a recent report of the European Environment Agency estimates that air pollution continues to be responsible for more than 430 000 premature deaths in Europe, making it the single largest environmental health risk on the continent.

Despite these alarming findings, the Commission’s progress on the revision of the ‘New Emission Driving Cycle’ (NEDC) has been largely insufficient, mainly due to pressure from Member States and the car lobby.

Electrification: the inevitable and only sustainable way forward for the transport sector

As the evidence of fraudulent emission testing practices keeps piling, the importance of electrifying transport becomes ever more apparent: namely its key role in reconciling the decarbonisation of the transport sector and reducing local air pollution in cities.

Even if emission testing is improved and vehicles taxed fairly to reflect real-world emissions, there are limits to how much the efficiency of combustion engines can be improved. This means that soon it will be cheaper and more sustainable to incentivise and heavily invest in electric vehicles. Failure to make timely investments into zero emission transport will threaten car makers’ viability in the face of ever increasing concern for air pollution-induced health issues, more stringent emission performance standards and expected tougher emission testing regimes.

To reinforce its role as the frontrunner in electro-mobility, Norway last month released its National Transport Plan for 2018-2029 calling for electric and hydrogen cars to make up 100% of new car sales by 2025. The plan sets out for all newly-registered cars, light vans and buses  to be ‘zero emission’ by 2025, with 1.6 million to be put on the roads by 2030 – the equivalent of saving roughly 2.7 million tonnes of CO­2 emissions.

This ambitious plan with policy recommendations was put forward by Norway’s governmental agencies representing coast, aviation, rail and road transport. The report was recently presented to the government and is pending approval by parliament.

Similarly, the Dutch Parliament has voted through a motion that could see the sale of non-electric cars banned by 2025. The motion has passed through the lower house of the Dutch parliament, and now needs to be approved by the nation’s senate for it to become law.

2016 looks promising for the EU with a number of upcoming opportunities to highlight and accelerate the wider uptake of electric transport. In the second quarter of 2016, for instance, the European Commission is expected to present a proposal for a post-2020 Effort Sharing Decision (ESD), which will be accompanied by a Communication on the Decarbonisation of Transport. Furthermore, 2016 will be a decisive year in terms of EU Member States’ preparatory process for the implementation of the Alternative Fuels Infrastructure (AFI) directive.