In response to the recent revelations of Volkswagen having equipped around 11 million of its vehicles with defeat devices to produce unrealistically low NOx emission results, the US Environmental Protection Agency (EPA) launched a broader investigation into the entire car maker industry. Bellona has long suspected such fraudulent practices of being commonplace across the whole car maker industry. This suspicion was confirmed by yesterday’s announcement by the EPA revealing that Audi and Porsche have been relying on similar emission cheating software to attain air pollution limits mandated by law.

Published on November 3, 2015 by Bellona Europa 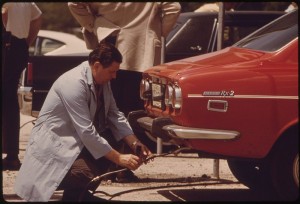 “The evidence is overwhelming. The list of named and shamed car making companies is increasing. This new development is particularly interesting given that the new Chairman of Volkswagen, tasked with ‘cleaning up’, is the former head of Porsche. The alarming implications, in particular regarding human health and societal cost, arising from the ever increasing gap between reported and actual emissions has been made clear by a number of recent reports. While the Commission claims to recognise the seriousness of the situation in the leaked version of its State of the Energy Union Package, this is clearly not backed by concrete actions” – argued Jonas Helseth, Director at Bellona Europa, in reference to the Commission’s recent decision to delay the introduction of more stringent emission testing rules for existing models by one year. “It is time to move beyond aspirational language, to concrete action to accelerate electrification of transport – the clear way forward” – adds Helseth.

The VW scandal sparked an industry-wide investigation in the US, where specifically tailored testing procedures were employed to detect potential defeat devices. All 2015 and 2016 light duty diesel models available in the US were probed. The result was an increase in the named and shamed cheating automakers. Those now include the new 2015 Porsche Cayenne and five Audi models, namely the upcoming A6 Quattro, A7 Quattro, A8, A8L, and Q5. Volkswagen’s Touareg was also added to the list.

In addition to the increasing evidence of car makers manipulating emission test results, a number of recent reports, including those by Transport & Environment and the ICCT, have brought attention to the ever increasing mismatch between reported and on-road emissions, and the economic, environmental and most of all human health-repercussions these have entailed. While cheating practices have helped car makers achieve significant cost savings, amounting to roughly €7 billion[1], from complying with EU regulations, the associated costs incurred by society will be detrimental, in the form of deadly air pollution levels and human lives at stake. In fact, a recent study has found that more than 3 million people a year are killed prematurely by outdoor air pollution, more than malaria and HIV/AIDS combined[2].

The interdependence between emission testing and emission standards

Attaining an accurate figure of vehicle emissions is crucial as these are used by governments as a benchmark for future air control policies as well as public health policies. Air pollution control in the EU has been governed by the progressive introduction of increasingly stringent standards. As of September 2015, all newly sold vehicles must meet the Euro 6 standard which sets maximum allowable exhaust emission levels of NOx and other pollutants for petrol and diesel cars. For diesel cars, Euro 6 dramatically reduces the permitted level of NOx emitted down to 80mg/km compared to the 180mg/km level that was required for cars to meet the previous Euro 5 emissions standards. The limit for NOx from petrol cars remains at 60mg/km, the same as for the Euro 5 standard. Accurate emission testing is imperative in delivering representative results and proving that these standards have indeed been met

In a draft version of its Communication on the State of the Energy Union Package, the European Commission recognises that “one third of greenhouse gas emissions in the non-ETS sectors come from transport” and thus the importance of intensifying measures to decarbonise transport. What is more, the paper highlights the need for “effective enforcement of regulatory standards” in light of recent revelations concerning VW and the entire car maker industry. The Commission admits that laboratory testing has failed in delivering accurate results representative of real driving conditions. Nevertheless, the draft version omits recommendations on further actions to rectify the shortcomings in the current emission testing system. The insertion of a highlighted text “add: next steps” implies that these are forthcoming.

Bellona urges the Commission to ensure the timely introduction of a stricter procedure, featuring third party monitoring and sporadic spot checks to guarantee accurate results. What is more, the upcoming Commission Communication on the Decarbonisation of Transport needs to make clear the importance of putting in place fiscal and regulatory incentives for the wider uptake of electromobility.

Despite the ever more-difficult to ignore evidence and its own acknowledgment of the problem in the leaked State of the Energy Union Package, the European Commission last week agreed to delay the introduction of an urgently-needed more stringent emission testing procedure (the so-called ‘real driving emissions test’) by one year. What this means is that while new types of vehicles will have to undergo these new tests from 2017, all existing car types will remain exempted until 2019, as opposed to 2018.  This in turn will allow car makers to continue emitting more than twice the legal threshold of nitrogen oxides (NOx), and up to 50% more from 2021.