Road to Glasgow: What our 5,400 km electric road trip taught us

After having recently completed an immense road trip traversing nine countries, I’ve learned that although electromobility is certainly possible, even effortless in some cases, Europe isn’t rigged for a large-scale roll-out of EVs.

Published on November 18, 2021 by Bellona Europa 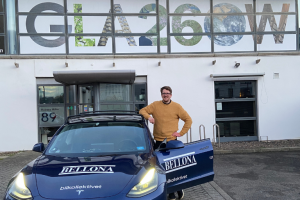 After having recently completed an immense road trip traversing nine countries, I’ve learned that although electromobility is certainly possible, even effortless in some cases, Europe isn’t rigged for a large-scale roll-out of EVs.

But first, let’s have a look at our numbers. Because what does driving that sort of distance back and forth through Europe really mean, apart from having all the time in the world to figure out the hard way what your road trip colleagues/companions are really like?
As I explained in the video, our total power consumption was just over 1 MWh.
1 MWh = 1,000 kWh = 1,000,000 Wh.

One watt-hour (Wh) is the equivalent of using one watt of electricity for one hour.
In other words, a 1,000-watt travel-size hairdryer would have to run for 1,000 hours to consume the same amount of electricity as our road trip. A 2,000-watt kettle half that.

These numbers are quite fun to play around with. For instance, the electricity required to boil a full kettle of water will carry an EV about one kilometre, assuming it takes five minutes from cold to boiling. Or rotate a Ferris wheel about 1/8th of a complete revolution. Now you know.

Alternatively, had we made the journey in a similarly sized petrol-powered car, assuming an average consumption of 8l/100 km (I’m being nice; since 90% of the distance was covered at motorway speeds a higher consumption is likely), we would have burnt 435 litres of petrol, equalling almost 4,000 kWh of energy or roughly four times more than our EV. This would also have caused one tonne of tailpipe CO2 emissions. I’m not pretending the electricity used on our trip was 100 per cent renewable, but even with an imperfect energy mix, EVs have a substantially lower lifecycle carbon footprint than their combustion engine counterparts.

And what about the cost? Well, the average petrol price per litre at the time of writing is about €1.50 in the countries we passed through. That would bring the fuel cost to €650 for a journey equivalent to ours. What we spent on electricity, however, is a very different story. In general, commercial charging is more expensive than charging at home, and rapid charging along motorways is more costly than overnight charging in e.g. a public garage. I assume the average cost of electricity on our trip to be 0.3€/kWh. That brings our bill to about €300, or less than half the petrol cost. Bear in mind. This is by relying exclusively on commercial charging. In day to day use, you’d be paying less if you’d be able to charge at home. 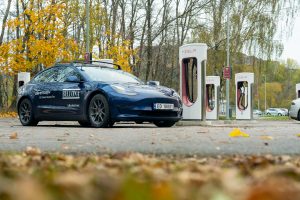 Why do I claim that Europe isn’t ready for electromobility?
We drove a Tesla Model 3 Long Range from Oslo to Glasgow for COP26 and back, covering more than 5,400 kilometres. As I explained in the video, our trip was trouble-free and effortless (apart from the fatigue stemming from the actual driving and constantly having to come up with new topics for conversation with your colleagues). However, it also served as a reminder that despite all the national combustion engine vehicle phase-out targets around Europe, manufacturer phase-out pledges and efforts by the EU to reduce emissions from the transport sector, we’re still far from making large-scale electromobility a reality.

That’s not to say that our trip was in any way hampered by lack of infrastructure, but our journey represents a best-case scenario. Using a Tesla Model 3 Long Range for the journey, we benefited from having one of the longest-range EVs on the market at our disposal and one that can use the Tesla charging network, which is in a class of its own, no less. Add to that that we stuck to main highways on the journey, and there you have it – a hassle-free EV driving experience.

Just a few years back, in 2017, I took one of the best “affordable” EVs of the time, an Opel Ampera-e, on a journey from Oslo to Bonn and back. This was my first ever long drive in an EV, and I learned everything the hard way. 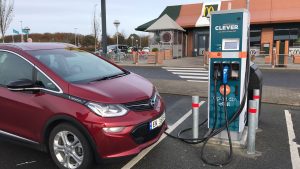 It had a range of 520 kilometres on a full charge according to the official specification. That was way too optimistic from the get-go, only feasible at very low speeds and under absolutely optimum conditions. Add to that the fact that you only use about 60 per cent of the battery capacity between charges on a long drive (drive it down to 20%, charge to 80%, drive it down to 20% again, repeat). November temperatures and you end up with less than 200 km between charges at motorway speeds.

Also, according to official spec, it could charge at 50 kW – in reality, you would peak at 40-something kW for a few minutes before it tapered off fast as the battery got to higher percentages.

Combined, range and charging issues meant that my drive would consist of motorway stints of an hour and a half followed by 45-minute charging sessions in seemingly endless cycles. And I haven’t even mentioned the chargers themselves, which never accepted card payment, meaning I had to rely on a myriad of apps and memberships and RFiD tags to make them work. Even with that, I’d end up stranded – at a charger that had opening hours, although it’s a fully automated piece of technology. I arrived at this charger with a nearly depleted battery just minutes after it had closed its business that day at 5 pm and thus ended up spending an involuntary night in a nearby hotel, charging the car with an extension cord through an open window.

That said, I think my 2017 trip would have been trouble-free if I had used a Tesla of that era because they had their dedicated “Supercharger” network already back then. It’s only now that other carmakers are starting to catch up range-wise, which is still lagging behind charging infrastructure-wise. 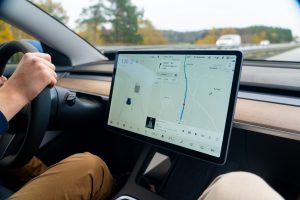 So there you have it. I bring up this anecdote because even though the range and charging speed has improved a lot on newer EVs, the issues I had with the charging infrastructure still aren’t being addressed sufficiently. Card payment is still not possible in most locations. The number of chargers at each location is too low, making them vulnerable to technical errors and the build-up of queues as EV sales ramp up. We’ve had this problem for years in Norway. And outside of the motorway network, charger scarcity becomes a real issue, making some places virtually inaccessible to some shorter-range EVs. Compare that to the abundance of petrol stations across the continent, and even Tesla’s charging network pales in comparison.

It would be perfectly feasible to make our Oslo-Glasgow journey in other long-range non-Tesla EVs as well, albeit with more hassle. At several motorway rest stops, we saw another cutting edge brand new EVs struggling with non-Tesla rapid chargers for various reasons. One had its payment system malfunctioning. Others just didn’t work.

If you want consumers to embrace the electric revolution, give them an electricity supply that works, is fast and easy to use. That’s it.
The cars speak for themselves; once you drive an EV, you get the point. They just make sense: the smoothness, the instant torque, the controllability. Personally, I’m on my second EV and will never turn back.

However, I still bring a 25-metre extension cord with me at all times – just in case. 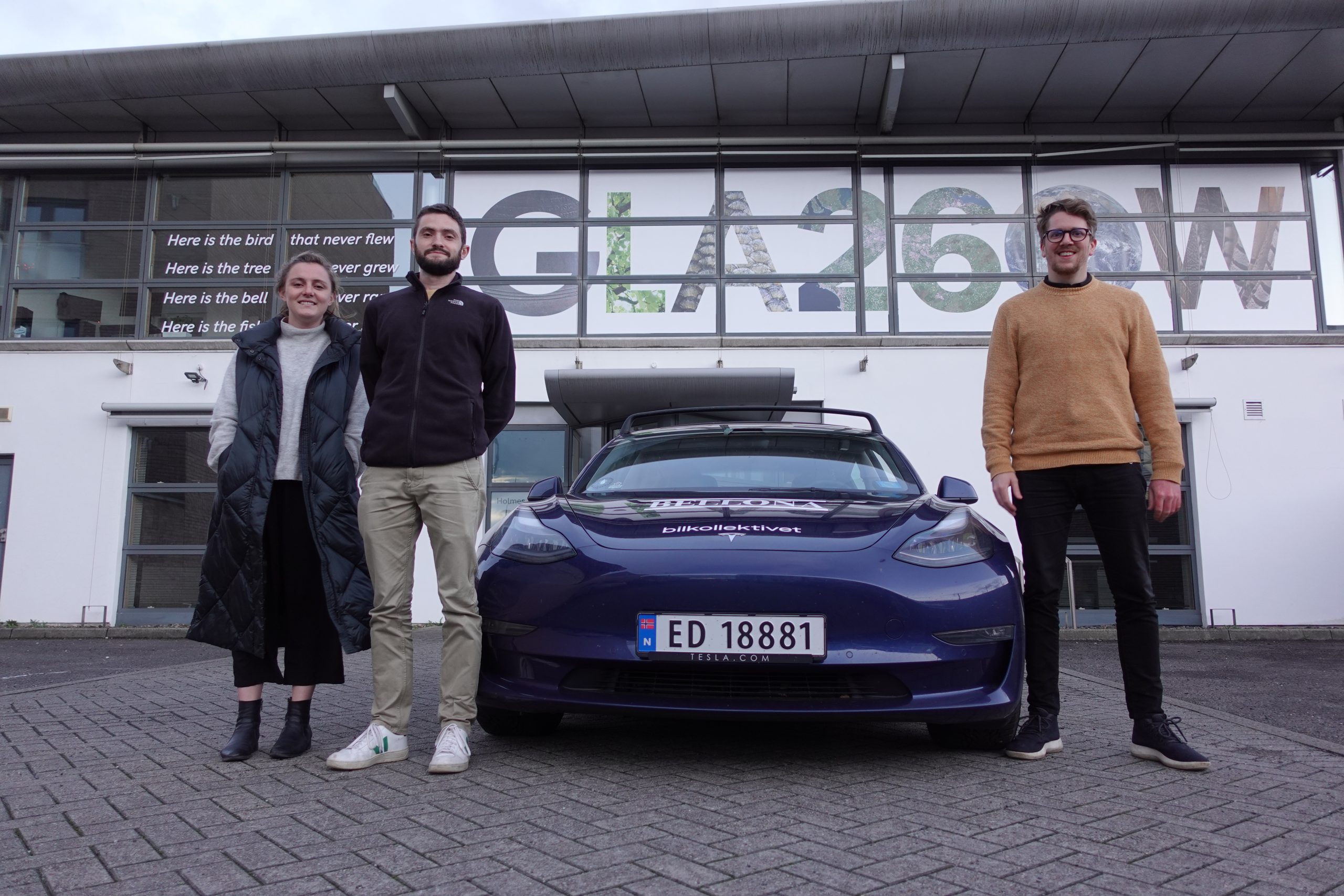